Enku Ekuta: My Olympian mum inspired me to be a judoka 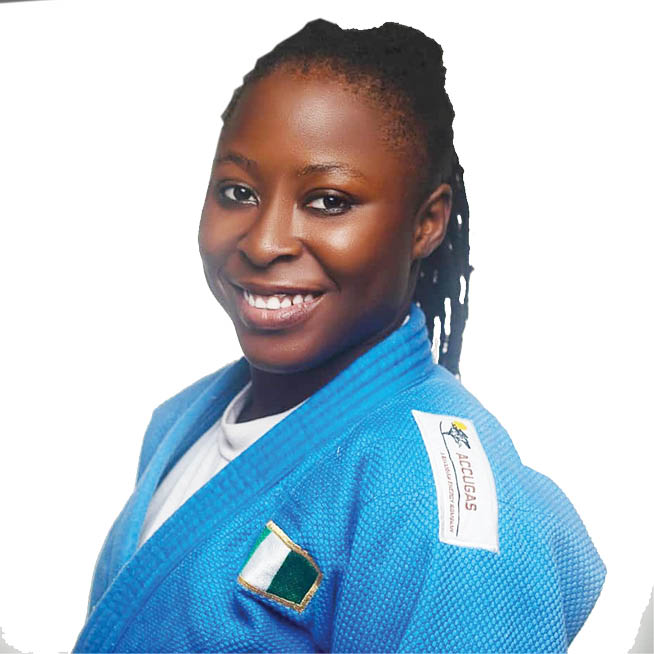 A gold medallist at the just concluded 2020 National Sports Festival in Benin City, Enku Ewa Ekuta has said her mother, Catherine Ekuta who represented Nigeria in judo at Athens 2004, played a pivotal role in her becoming a judoka. The 23 year old who has qualified for the Tokyo Olympics also spoke to Trust Sports on her preparations for the world’s biggest games. Ewa also explained why she represented Akwa Ibom instead of Cross River which is her state of origin.

How did you get into the game of judo?

I started judo from my mother’s room when I was about a year old. I started competing in Judo in 2009. I was very troublesome, a fighter in the house so my energy was channelled into a combat sport by my parents who are also into sports.

So how are you faring in the sport?

It has been okay. My parents are my coaches. My mum is an Olympian while my dad was a national coach. My sister and I are usually taken to competitions by our parents. My mother represented Nigeria in judo at the 2004 Athens Olympics so whenever I watched her fights, I was impressed and my interest in the sport grew more.

Do you regret going into the game of judo?

So what have you gained from this sport?

Starting from my parents, the sport has brought food to our table. They came from nothing but sports gave them livelihood. Now they work with the ministry of Youth and Sports in Akwa-Ibom. For me, I attend University of Port Harcourt. While in school, I was opportune to represent UNIPORT in the West African University Games (WAUG). I almost got back all the school fees I had paid. I was placed on allowance by my state and from there I got money. That has really been helpful.

My first competition was in 2009 organised by Japanese Embassy in Abuja. I won bronze. I had just finished eating when I was told to come and fight. I wasn’t serious, that was why I won a bronze. My sister won a silver medal at the same event. In 2013, I went for trials for All Africa Games and I reached finals but the person I fought with was more experienced than me. In 2015, I went for the Japan Ambassador Cup and I won a gold medal there. At the 2018 National Sports Festival in Abuja, I also had a gold medal there. In 2020, I was sponsored to Cameroon and Senegal where I won bronze and gold respectively. I also went to Madagascar where I also got a bronze. I also went to Uzbekistan and I was beaten well. That was the first competition I would go for without a medal. I came back with only my athlete’s tag.

How happy were you when you were named the Most Valuable female Judoka at the just concluded National Sports Festival in Benin?

I was shocked when I heard my name. I didn’t believe my coach who said I would be honoured. I doubted him and didn’t dress well for the honour. I was surprised all the same.

Olympics is around the corner. Having qualified for the games, how are you preparing to win medals in Tokyo?

I am preparing to go to Casablanca, though I am not sure if it will hold. There is a grand slam in Russia, World Championship and African championship that are on my calendar ahead of the Olympics. If I can attend these championships, they will help me prepare for the Olympics.

What then are your expectations in Tokyo?

Following the series of international competitions that I have attended, I now have more confidence to take on the best in the world. I will train harder to pick a gold medal at the Olympics.

Why did you represent Akwa Ibom at Edo 2020 instead of Cross River where you come from?

I don’t believe in abandoning someone that trained me for another person. I come from Cross River but was born and bred in Akwa-Ibom who trained me till this level. It is not about the money but the loyalty to the state that fed me. The coaches in Akwa Ibom understand me better than any other coach. Delta once invited me but I didn’t accept. Like I said earlier, it is not always about the money. I have a connection with Akwa Ibom already.

How are you able to combine education and your professional career?

Thanks to the pandemic, I had time to train last year very well without thinking of classes and also ASUU did their own thing as well. I am in 300L now. But before then, I just shuttle between camping exercises and exam times. My course mates have been helpful to put me up to speed when I miss classes. And if there is a clash between a competition and exam, I leave the training for the exams. But if examinations come up during the Olympics, I believe the director of sports will meet the school and help me get permission to write my exams later.

You said you are not into any serious relationship, why is it so?