The Iragbiji Community Joint Security Task Force has arrested two lotters who stole a motorcycle and a generator during the ENDSARS crisis. The traditional ruler… 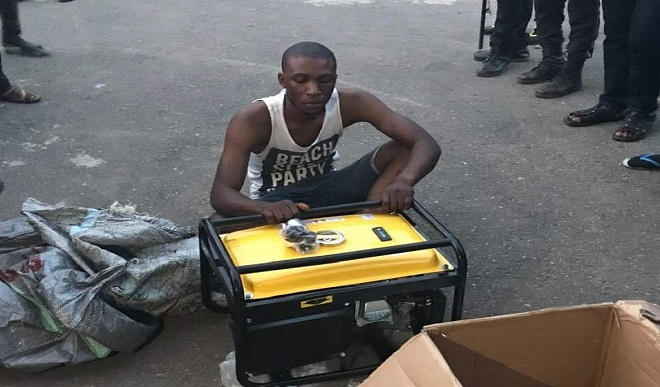 The Iragbiji Community Joint Security Task Force has arrested two lotters who stole a motorcycle and a generator during the ENDSARS crisis.

The traditional ruler of Iragbiji, Oba Abdulrosheed Olabomi, who deployed and coordinated the community security team, on Thursday, handed the suspects to the Police.

The monarch said the man that stole the motorcycle was hiding it in his room and was apprehended during a house-to-house search by the local security team.

“Our community security combed everywhere in the area and items dropped in different places were taken to the Divisional Police Headquarters, Iragbiji.

“A non indigene, who hid a motorcycle in his room, was apprehended and handed over to the police with his loot,” the monarch said.

Oba Olabomi said a young man, who was afraid of the house-to-house search as directed by Governor Gboyega Oyetolas, decided to send a brand new generator which he stole to Ekiti State.

“Unknown to him that our Task force was on patrol, he was caught at Oloti boundary and handed over to the police,” he said.

The monarch lauded the Divisional Police Officer in Iragbiji, Saliu Aliu, for supporting and cooperating with the local security.

He said “the DPO is a professional to the core. His co-operation is unequivocal.”

Oba Olabomi expressed gratitude to the people of Iragbiji Community for being patriotic and law abiding.

“To my great security Task Force, led by Muritala Afolabi and Waheed Jimoh, I appreciate your commitment.

“You have used your youthfulness to lift the name of Iragbiji higher,” the monarch said.