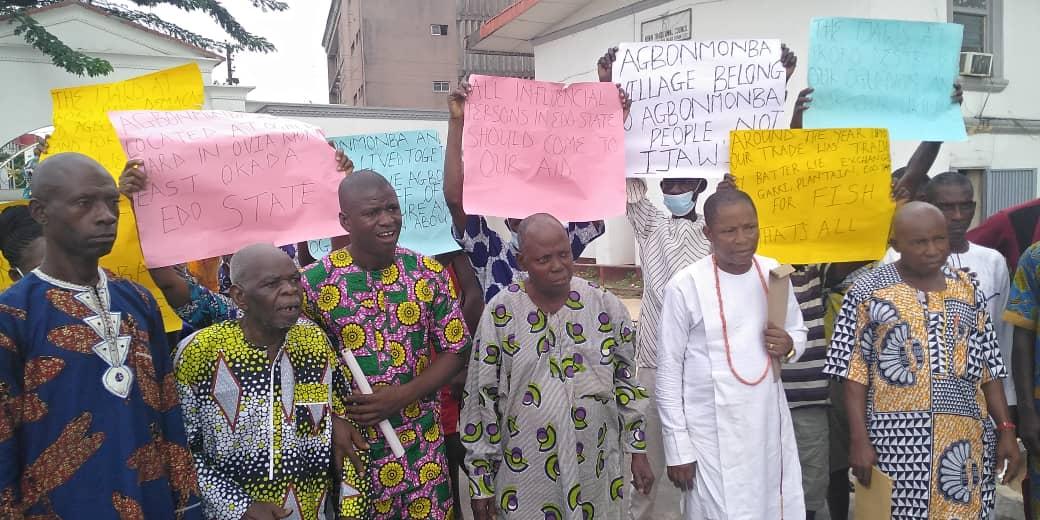 Speaking during the protest, one of the community elders, Mr Pius Odeh, said that the Ogua-Edion (Elders Porch) was desecrated by persons suspected to be from the neighbouring village, thereby denying the people of Agbonmoba access to their ancestral traditional worship.

He appealed to concerned authorities, including Oba Ewuare II; the state Governor, Mr Godwin Obaseki; and security agencies to come to their aid.

According to him, they had been living in harmony with non-natives since the village was founded in 1818.

“Trouble started in 2011 when some outlaws by way of conquest, began to claim ownership of the area, thereby compelling the indigenes to pay homage to them (foreigners), an act considered as an abomination in the land.

“The invaders (non-natives) want the aboriginal settlers (Benin people in the area) to pay homage to them, which is an aberration in Edo State after they had breached the existing boundary delineation between Agbonmoba and Ikoro village,” Odeh said.

Also speaking, Mr Enorense Iredia, alleged that the hostilities resumed a few days ago after the Ogua-Edion was invaded by hoodlums, aided by some of the non-natives in the area.

He said the people of Agbonmoba are now afraid to return to Agbonmoba village and also to go to their farms due to the incessant harassment and continuous threats of elimination.

They called and assured that their grievances would reach the appropriate authority.