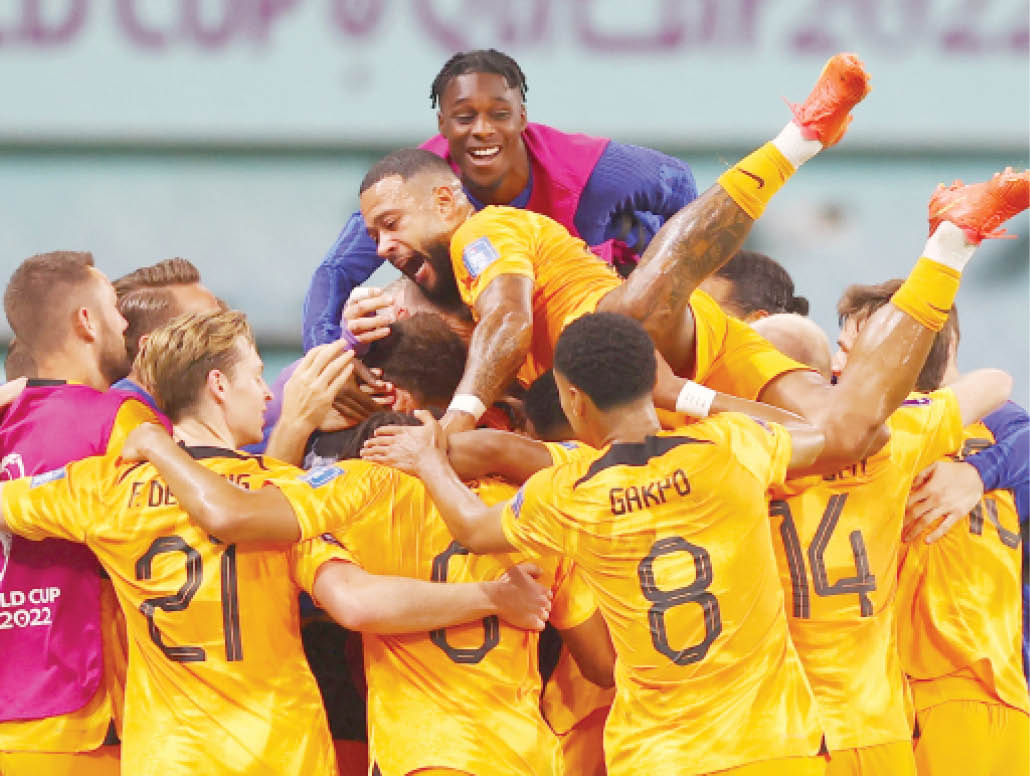 Netherlands players celebrating after their victory over hard-fighting USA in the Round of 16 match played yesterday iat Khalifa International Stadium, Al Rayyan

Denzel Dumfries set up the first two goals and netted a decisive third to ensure a 3-1 victory for the Netherlands over the United States at the Khalifa International Stadium on Saturday and a spot in the World Cup quarterfinals, thwarting their opponent’s efforts at a late comeback.

Dumfries ended any hopes the Americans had of staging a rescue act after they had gone 2-0 down at halftime, but the United States fought back to reduce the deficit through Haji Wright in the 76th minute.

The Dutch had looked to be comfortably in command of the opening Round of 16 tie in front of 44 846 spectators with two goals scored in similar fashion as Dumfries crossed from the right for Depay to net first in the 10th minute, and then Blind on the stroke of halftime.

But Wright pulled a goal back to offer the Americans hope of a comeback.

That lasted only five minutes, however, before Dumfries sealed a man-of-the-match performance with his 81st-minute goal, tucking away Blind’s cross from the left.

But despite advancing to their seventh World Cup quarterfinal since 1974, it was another Dutch performance at the Qatar World Cup that will not please their demanding supporters.

They were unusually cautious at times, played at a slow tempo, and lived dangerously as they allowed the Americans plenty of possession.

Yet they still looked a notch better than their opponents.

Cody Gakpo and Dumfries cleared off the line in the second half and goalkeeper Andries Noppert made several saves to keep a clean sheet as the Netherlands extended their unbeaten run since Louis van Gaal returned as coach last year to 19 games.

But in the end Dumfries proved decisive for the Dutch to move on to their next challenge against either Argentina or Australia in the last eight next Friday.