Did Emefiele call out DSS DG for a fight?

A video has been circulating on social media suggesting that the governor of the Central Bank, Mr Godwin Emefiele, has called out the Director General of… 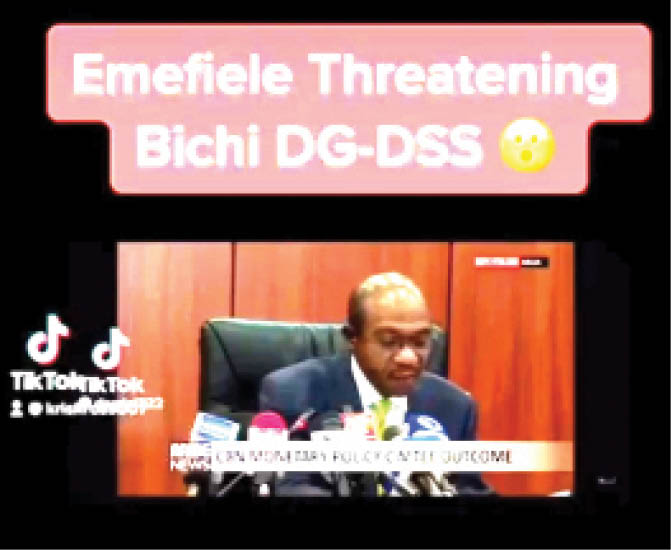 A video has been circulating on social media suggesting that the governor of the Central Bank, Mr Godwin Emefiele, has called out the Director General of the Department of State Services, Mr Yusuf Bichi, to a fight.

The video is mostly circulating on WhatsApp, Telegram and Tik Tok.

The 20-second video shows Mr Emefiele addressing a press conference on the outcome of the monetary policy committee, where he allegedly made the comment.

In the video seen by Daily Trust, Emefiele is heard saying, “And I hear that it is making news on social media, well I am not on social media, but let him come and meet in the central bank, let him show his face.

“Those who feel they want to support him to fight him, come out let’s fight.”

Daily Trust subjected the video to checks and verification using Invid to ascertain its authenticity. It was discovered that the video was manipulated.

Subsequently, Daily Trust obtained the original video of the MPC press briefing in September 2021, where Mr Emefiele was answering questions on why it shut down AbokiFX, a website that collated the black market exchange rates of naira.

It was confirmed that the CBN governor was giving an update on why they had to shut down AbokiFX and not call Mr Bichi out for a fight as suggested by the title of the video.

Daily Trust recalls that in September 2021, when the video was recorded, CBN had accused AbokiFX, a website that collates the black market exchange rates of naira, of carrying out an “illegal activity that undermines the economy”.

The apex bank governor, Godwin Emefiele, said the publisher of the platform, Oniwinde Adedotun, was involved in “illegal forex trading.”

The CBN, at the time, came under pressure after the value of the naira plummeted following the bank’s decision to stop the sale of dollars to Bureaux de Change operators a month earlier.

The value of the currency fell to N570 a dollar on Friday from less than N520 a dollar it was traded before the ban. Most local newspapers relied on AbokiFX for the parallel market rates.

Addressing journalists on Friday after the Monetary Policy Committee meeting that began Thursday, Mr Emefiele said the apex bank had been studying the activities of abokiFX in the last two years.

“There was a time we asked our colleagues to call the abokiFX to ask how he conducts the rates,” he said.

Although it has been established that there is a running battle between the Central Bank governor and the DSS over allegations of terrorism financing and other issues, the CBN governor has since resumed at his duty post.

The apex bank, in a statement on January 16, said the governor was back to work with renewed vigour.

“The governor resumed with renewed vigour to perform his duty ahead of the first Monetary Policy Committee (MPC) meeting of the year scheduled for January 23–24, 2023.

“Mr Emefiele remains committed to performing the task before him in line with his oath of office and the policy direction of President Muhammadu Buhari.

“While thanking the public for keeping faith with the bank, we urge Nigerians to continue to support the policies of the bank aimed at ensuring a stable financial system and the Nigerian economy in general,” the statement, signed by Osita Nwanisobi, Director, Corporate Communications, CBN, said.

Following verification by Daily Trust, it has been established that the video in circulation is False and Misleading as the CBN governor did not at any point in time call the DSS DG out for a fight.