The 2022 governorship election in Osun State has come and gone but Nigerians would not forget it in a hurry. For various reasons, the election… 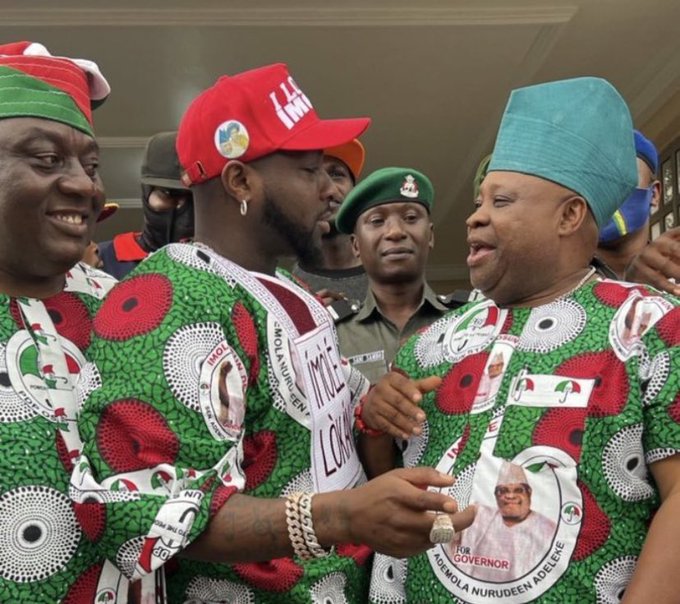 The All Progressives Congress (APC) wanted to retain its hold of the state, while the Peoples Democratic Party (PDP) was bent on extending its frontiers in the South West region. At the end of the day, the winner carried the day. However, some persons played key roles in the victory of  Senator Ademola Adeleke.

We highlight some of these factors below:

Award-winning singer has just shown that he is not just gifted on stage but he also has what it takes to deliver a world-class campaign. Davido’s support for his uncle did not start in this election. He was with the governor-elect through the thick and thin four years ago when their efforts did not yield the desired result.

After the 2018 loss, Davido went back to the drawing board and again they launched a new campaign. The artiste went after anything that he perceived stood in the way of  his uncle. In January, Davido took his loyalty for his beloved uncle a step further when he squared off with his cousin, Bamidele Adeleke. Bamidele was the main agent of Senator Adeleke in 2018 when he spent the night at INEC Collation Center. Four years down the line, he had turned into a political foe of the governor-elect.

As the election got closer, Davido practically relocated to Osun State in solidarity with his uncle. One of their biggest test came when the APC decided to cut down the crowd at PDP rally with the invitation of Habeeb Okunola, music star known as Portable to Osogbo. The duo went about their business and two days later, Portable was seen on his way out of the state. Time up! But Davido stood back. On the day of the election, he used his social media strength to advance his uncle’s interest. He posted a video where he told people to protect their votes.

“See how red my eyes are, I haven’t slept. Please guide your territory. Monitor your votes,” he said as he shouted “Imole De”, one of the slogans of the campaign. A strong case can be made that Davido swayed many votes, especially from young persons who admire him, the way of Senator Adeleke.

A house divided against itself cannot stand goes a famous adage. If there is any sign that Nigeria’s main opposition party understands the meaning of this adage, the just concluded election is a case in point. The PDP has been moving from one crisis to the other. In Ekiti, lack of cohesion did not make the party put its house in order and as such, a mega rally did not hold to campaign for Bisi Kolawole, its candidate in the election won by the All Progressives Congress (APC).

Something worse than Ekiti could have befallen PDP in Osun as the party was in the middle of the post presidential primaries crisis. 11 governors shunned the inauguration of Adeleke’s campaign council. Former Vice-President Atiku Abubakar, who is the party’s presidential candidate, and Senator Iyioricha Ayu, Chairman of the opposition party, were also absent. The APC might have been waiting to profit from the situation, but the PDP left little or nothing to chance as Atiku cut short his trip to Europe, Ayu created time and other big wigs were on ground to speak with Osun voters.

Although some key members of the party still stayed away, the mega rally had the touch it deserves as speaker after speaker warmed their way to the hearts of the people.

When the signs were very clear that the PDP was coasting to victory in Osun, a video emerged on social media. In that video were former Senate President Bukola Saraki and two governors – Godwin Obaseki Edo and Duoye Diri (Bayelsa). Davido exchanged banters with them and prostrated as a sign of respect. The husky voice of Obaseki resonated as he hailed “Davido, Davido!!” Seated in a corner was a man casually dressed, not noticeable from a distance, but the music star walked up to him shouting “SP! SP”, which stands for Senate President. Saraki stood up to embrace one of Nigeria’s finest talents and Davido threw himself into his warm embrace as he began to shed tears. Some ladies at the background were heard saying tears of joy. As Davido made to leave, he walked back to Saraki again. He later moved towards his uncle who was also emotional.

Saraki has been in Osun a week to the election, coordinating the Situation Room of the PDP. He is not only a friend to the Adeleke’s, he was Nigeria’s number three man when the governor-elect served in the Upper Chamber of the National Assembly. Together with some persons in the PDP, Saraki worked for Adeleke’s victory.

After losing in 2018, Adeleke dust himself up and gave it another shot. He could have allowed the bitter experience confine him to the back seat of politics but never, he took that same route again. One of the things that was used against him at the time was alleged certificate forgery. He was accused of not having the requisite educational capacity to govern. And for Adeleke, four years is such a long time in a man’s life.

He had his eyes on the governorship seat and before the next election, he enrolled in an American university where he studied criminology. Asked to comment on this feat in a debate organised for governorship candidates, he said ” “It wasn’t as if I didn’t go to school before. I did. Where I studied in America, their education is flexible. I like business. I would study for some time and stop for a while to do business so that I can make money. You can then return to school to continue your study when you like. We will engage the authorities so that we can change our educational system.

“When they were shouting that I wasn’t educated, I said if that is the case and if because I love my people in Osun, I have to be determined. I went back to study. I am happy to tell Osun people that today, even with my age at 60, I am now a criminologist so that I can use my security expertise for our state.”

DWINDLING POPULARITY OF THE APC

Although Alhaji Lai Mohammed, Minister of Information, Presidential Spokesman, Malam Garba Shehu, would resist this vehemently, there are clear signs that the rating of the ruling party is at an all-time low. From economic hardship to insecurity to issues bordering around welfare, APC of 2015 is not the same of today in terms of popularity.

For instance, many of the students who have been at home since February because of the Academic Staff Union of Universities (ASUU) strike would have cast protest votes against the ruling party. In fairness to Governor Oyetola, the welfare of workers got better compared to his predecessor who paid them half salaries for a long period of time.

However, there were still issues. In the election week, some persons whose house were demolished barricaded Government House, Osogbo to demand compensation. Although they admitted that their houses were destroyed under Rauf Aregbesola, Oyetola’s predecessor, the affected persons accused the incumbent governor of failing to fulfil his promise of paying compensation to them. They said clearly that they were unhappy, but perhaps attention was not given to them.

Shock is an understatement while describing the absence of Aregbesola during the election. Here is the only man who has governed the state for two terms since 1999. The cold war between Aregbesola played to the advantage of Adeleke. Some of Aregbesola’s allies defected to the PDP to team up with the governor-elect, there are reports that some stayed back in the APC to wreak havoc from within.

Perhaps if Oyetola could turn back the hands of time, he could have courted Aregbesola a little longer. PDP went into the stronghold of APC in this election and that served a huge blow to Oyetola’s reelection bid. The rift between Tinubu and Aregbesola did not also help matters. The relationship between the duo broke down two years back and attempts to reconcile them fell through. Oyetola and Tinubu and family relations. They could have concluded that they did not need Aregbesola to win the state.

INEC, security operatives, the electorate all played their roles in making the election what it was.