Last year, the National Committee on Naming, Registration and Release of Crop Varieties gave approval for the commercialization of the new genetically modified Pod Borer… 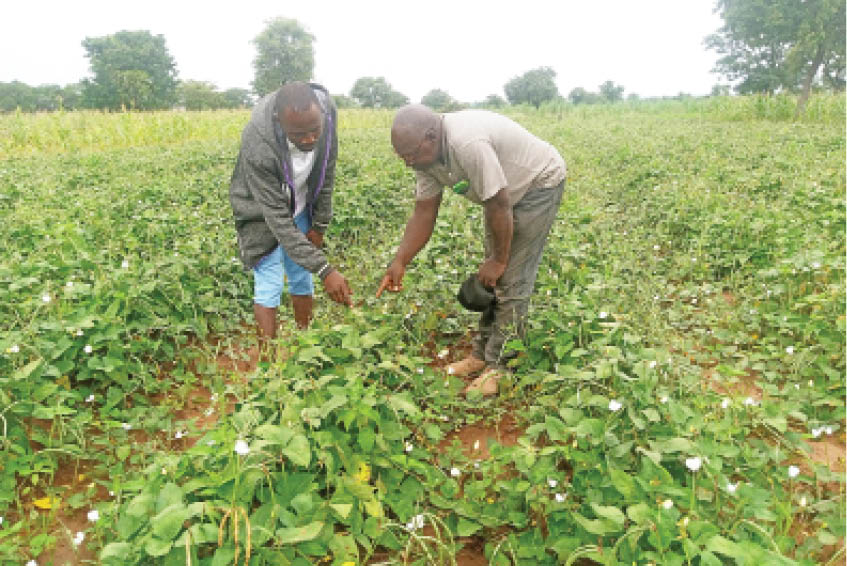 By Vincent A. Yusuf, who was in Pankshin and Mokwa

The new variety of beans (SAMPEA 20-T) was developed locally by Nigerian scientists at the Institute for Agricultural Research (IAR), Ahmadu Bello University, Zaria, Kaduna State, in collaboration with the various partners, under the coordination of the African Agricultural Technology Foundation (AATF).

The PBR cowpea variety is genetically modified for resistance to Maruca vitrata, a lepidoptreran (moths and butterflies) insect pest that makes farmers record up to 90 per cent yield loss in severe invasion cases. It is also resistant to two notorious parasitic weeds – striga and alectra.

Early in August, farmers in nine states (Bauchi, Jigawa, Plateau, Adamawa, Katsina, Kaduna, Kano, Zamfara, Niger and the Federal Capital Territory), which are cowpea production zones in the country, received the PBR variety for on-farm demonstrations to raise farmers’ awareness on the new genetically modified Pod Borer Resistant cowpea variety, which has huge potential to become a game changer in the industry.

The trials are managed by the farmers on their plots and supervised by government extension agents to ensure that the farmers follow laid down protocols and good agronomy practices.

Each farmer was given two varieties: the PBR cowpea and the traditional seed to be planted in two plots separated by 10 metre between them to clearly demarcate and avoid cross pollination. The essence is for the farmers to compare the performance of the PBR variety to the traditional variety in terms of resistant to insects, pests, striga weed and yield.

Our reporter visited four farm sites in two of the states (Plateau and Niger) where farmers are cultivating the PBR cowpea and gathered that they are already excited by the outcome of the Bt, cowpea trials in their farms as against the other non PBR varieties.

The performance of the Bt variety in the field is also attracting a lot of interests from other farmers around them. All the farmers visited said they had received many requests for the seed already. Some are concerned that someone might steal a portion of the harvest when due.

In Mokwa, Niger State, Ahmed Yusuf, a young man in his 30s and a medium scale cowpea farmer said he planted the two varieties on the same day. A visit to his farm revealed that the Bt variety is already budding while the non PBR cowpea is nowhere close to flowering.

Every year, Yusuf suffers from pests and striga, which makes him spray pesticides more than six times and regularly weed off striga before he could harvest something significant. In the plot where he planted the PBR cowpea, something surprised him:  he sprayed pesticides just twice and the crop is already producing massive pods.

“I planted the two varieties (the PBR and tradition cowpea seeds) on the 15 day of August this year.  Amazingly, the differences began to manifest from the germination stage. Most of the people around me here are attracted to this new PBR variety and are requesting it from me. I have been a cowpea farmer for a very long time, but the level of growth and resistant to pests, including striga of the PBR variety, is just amazing.

This is a game changer for me because my major headache here has been pests. Sometimes I had to apply pesticide almost 10 times before I can harvest something. But for this PBR variety, the farm cost is reduced by almost 50 per cent. It is also an early maturing variety and the pods are massive, as you can see,” the farmer said.

Usman Hawat Abubakar is an extension officer in the Niger State Agricultural Mechanisation and Development Authority in Mokwa, attached to the farmer. He told Daily Trust on Sunday that a lot of farmers in the town were already requesting for the seed.

He has been monitoring the farm weekly in order to guide the farmer properly to stem off any challenge scientifically.

Apart from the growth characteristics of the PBR cowpea, Mr Ahmed said it took few minutes to prepare it for eating and the taste is great. He added, “My wife  prefers it to any other beans. So this is the variety I want to continue to grow.”

Shittu Yellow is another PBR cowpea farmer in Tashan-Hajiya community, about 66 km from Kultigi in Niger State. He told our reporter in his farm that there was no need for anybody to even compare the PBR variety with any other variety.

“I have not seen any variety that can match the PBR cowpea. All the farmers who pass through this area ask me about this variety. Many farmers have been calling me over this; and everyone wants to have it,” he said.

His extension officer, Abubakar Kutigi travels 66km every week to help the farmer monitor the progress of the farm and advise him accordingly.

In Pamkshin and Kanam in Plateau State, the stories and enthusiasm are the same.

Mr Gonap Kassam Philip is a 27-year-old graduate of Philosophy from Chigwong village in Pankshin, Plateau State. He told Daily Trust on Sunday in his farm that the “PBR variety is wonderful. Germination rate is superb.”

The young cowpea farmer also said, “Other farmers are very anxious to go into this variety because we normally have the problem of serious maruca infestation with the local variety we have, which makes us spend lots of money on pesticides.

I have applied pesticide only twice and it is already producing pods. So the cost of farmers going into this one is much lower. I planted the two the same day, August 24, but the PBR variety is already producing flowers and pods while the traditional seed is yet to do so.”

Farmers, including the village head of Chigwong community, were in his farm to see the PBR cowpea when our reporter visited. Like him, they too want to grow it.

Asked what he would do after the trial, he said, “I want to continue with this new variety. Like I told you earlier, almost all the people around want to go for it. As you can see, my village head is here to see it too, and he has also shown interest in cultivating it.”

Like the young Philip, Mallam Abdulkarim Musa, 51, from Gyambar village in Dengi, about 58Km from Pankshin in Plateau State, has a similar story.

His farm is located along the road, which makes it easier for other farmers to spot the differences between the variety he has planted and theirs.

“They keep asking me where I got the variety from,” he said, adding that what is topmost in his mind is the expected yield, which according to him “is going to be much higher than our local varieties.”

Professor Mohammed Ishiyaku, who is the principal researcher for the PBR cowpea project in Nigeria, said that the country could make N48billion every year (about half of the nation’s budgetary allocation to agriculture) if one million hectares of the variety is cultivated by the farmers.

Dr Lawan Umar, the PBR cowpea trial manager, during the training of the farmers and extension officers in Zaria, said the objective of the demonstration was to have a general understanding of the new cowpea variety and to provide an ideal opportunity for cowpea growers to learn about sustainable farming practices for the PBR cowpea.

It would be recalled that the National Biosafety Management Agency (NBMA), last year granted environmental release approval for the Pod Borer Resistant cowpea and confirmed that the product was safe for human, livestock and the environment.