As many people lost their jobs following the outbreak of the COVID-19 pandemic, roving local pedicurists, otherwise called ‘Masu yankan farce’ in Hausa language, have… 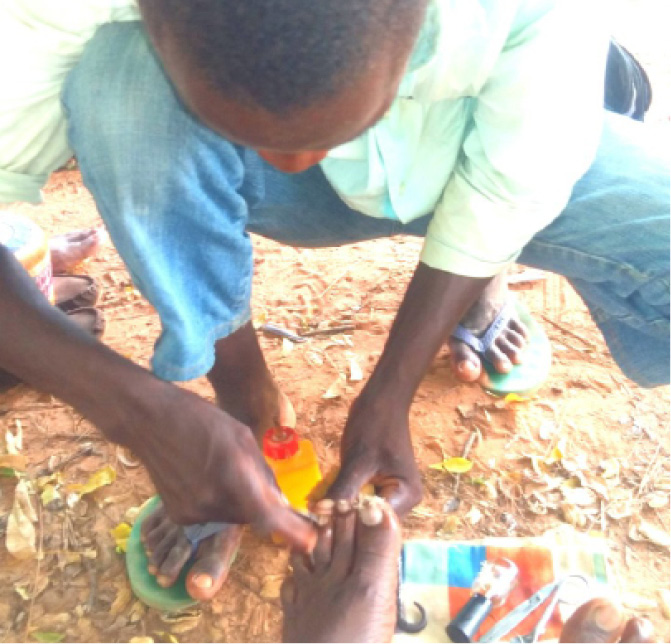 A nail cutter in Birnin Kebbi

As many people lost their jobs following the outbreak of the COVID-19 pandemic, roving local pedicurists, otherwise called ‘Masu yankan farce’ in Hausa language, have not been spared as majority of them were forced out of the odd job.

Observing social distancing as one of the critical safety protocols for containing the pandemic threw out this set of pedicurists out of job as cleaning, cutting or polishing the nails required close contact to carry out.

Most people that usually patronised them stopped as the pandemic ranges for fear of contact infection.

So as the patronage bar flattened, many of the roving pedicurists went into economic despair as their source of livelihood crashed to zero income.

There is this notion that most of these roving pedicurists left their various homes states in the North for Lagos which happened to the epicentre of the pandemic in the country.

Meanwhile, it was another jeopardy for those that fled back to their states as they were considered as COVID-19-exposed people so the safest thing to do was to keep them at a distance.

A resident of Kebbi metropolis who sells groceries, Rabiu Bala Miko, told Daily Trust that the last time he patronised the services of local pedicurists was in February this year.

He added that since the announcement of the outbreak of the pandemic in the country, he stopped patronising them.

Miko said since he needed to keep social distance to remain safe, he resorted to taking care of his nails by himself, adding that before now, he found it impossible to do that himself.

Sule Danbuzuwa, 31, said he had been in the odd job as a roving pedicurist for about 10 years and that it took him to many parts of the country.

Danbuzuwa, who hails from Kebbi State, said he combines his nail cutting business with farming, adding that once he harvested his farm he left for Lagos or Aba in the east.

The father of four said his trade helped him to take care of his family at farm off seasons.

He said he has never regretted being a roving pedicurist until the outbreak of the COVID-19, which has now made it very difficult for him to cater for his family.

Danbuzuwa revealed that he headed back home from Lagos thinking that life would be easier but the pandemic threw up similar circumstances even at home and that he had to go into bricklaying for survival.

He said the hope for respite was again almost dashed as his farm, from which he was expecting succor, was also washed away by a flood disaster that ravaged the state.

Danbuzuwa, however said the business of nail cutting is now starting to pick up as some people are beginning to call for the service, despite the consequences.

“Since the outbreak of the pandemic, life has been very tough as patronage for nail cutting dropped to zero.

“I was in Lagos when the country’s index case was announced.

“I had to come back home when even to feed myself was becoming difficult.

“Before the pandemic, even during the raining season when I am fully at the farm I enjoyed some patronage as a pedicurist when I went round the metropolis.

“But this time around, the reverse is the case.”