Kamoru, 23, and Rashidatu, 18, sat in front of the mountain-like rubble from the collapsed seven-storey building in Oba Idowu Oniru Street, Lagos, agonising over… 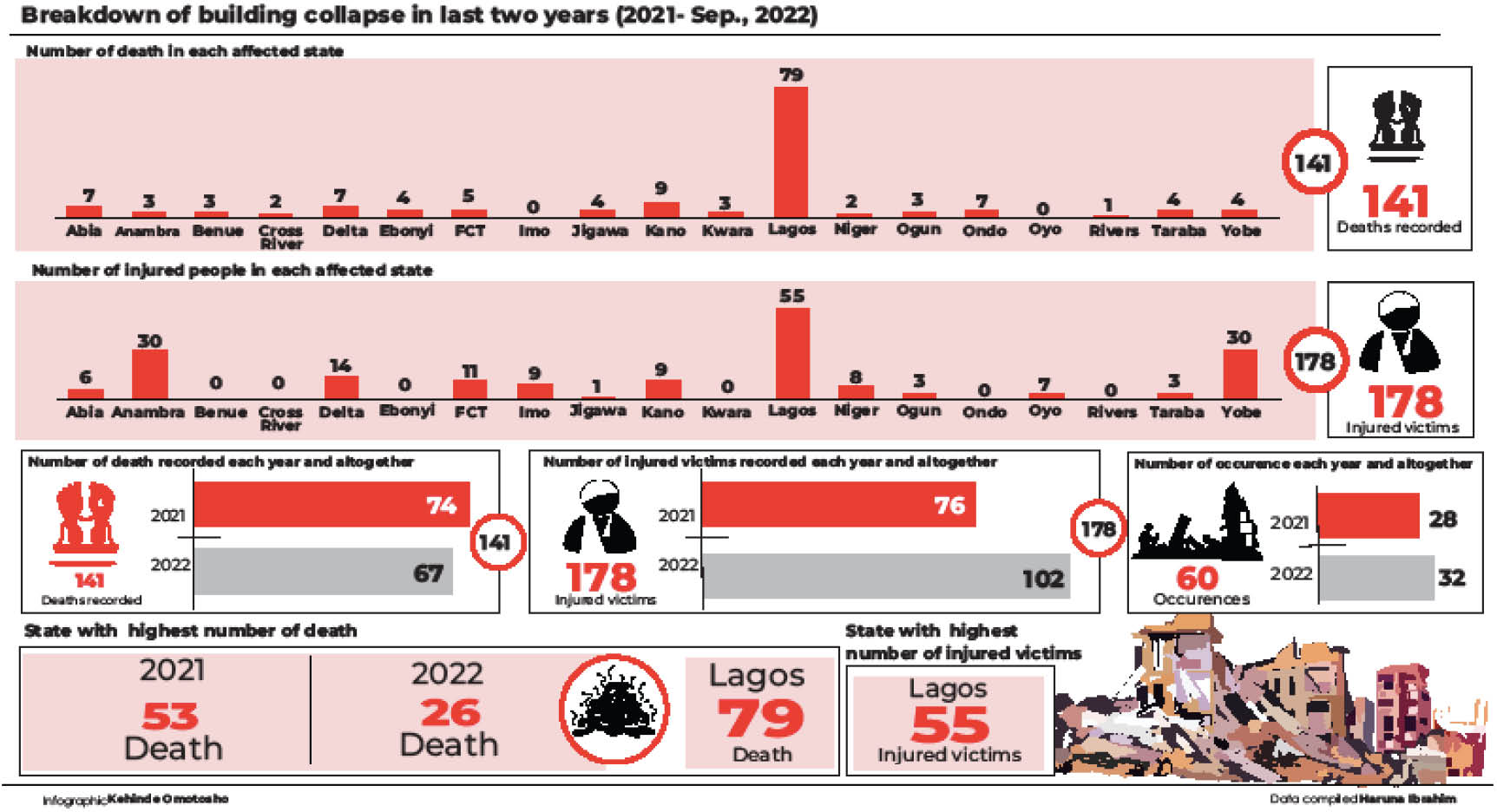 Kamoru, 23, and Rashidatu, 18, sat in front of the mountain-like rubble from the collapsed seven-storey building in Oba Idowu Oniru Street, Lagos, agonising over the loss of their father.

Kamoru, who is the eldest son of the deceased 68-year-old bricklayer, said his father would come home on Fridays and return on Sundays to the construction site, depending on the volume of work to be done.

Like many others, he fell victim to the ever-increasing number of building collapse incidents that have continued to kill many in Nigeria, with the latest figures showing that at least two people get killed in every collapse on average.

Two buildings collapsed four days apart in Kano and Lagos, killing four and injuring many, a situation that further highlights the magnitude of the national tragedy that has now plagued the building and construction sector in the country.

A building under construction in one of the GSM markets on Beirut Road in Kano collapsed on Wednesday the previous week, killing two and injuring many.

Data collated by Daily Trust Saturday has shown that 137 people have been killed, while 156 have been injured in 57 collapse incidents across 14 states of the federation from January 2021 to date. The states are Lagos, Kano, Anambra, Rivers, Ebonyi, Delta, Abia, Yobe, Benue, Federal Capital Territory (FCT), Ondo, Ogun, Imo and Kwara.

Lagos State recorded the highest number of incidents: 10 in 2021, including the infamous Ikoyi incident, which killed over 40 people, and five in 2022; thus accounting for the majority of fatalities in all the structural failures that occurred in the building and construction sector in the period under review.

A former president of the Nigeria Institute of Building (NIOB), Kunle Awobodu, said the number of reported or documented collapsed buildings in Nigeria since October 1974, as at July 13, 2022, was 508, with that of Lagos standing at 320.

“In that case, Lagos State accounts for 63 per cent of collapsed buildings in Nigeria, yet it has the smallest land area among the 36 states of the federation,” he added.

Before his resignation, however, he told journalists at the scene of the Oniru building collapse that the developer of the structure had been “hostile” to the agency’s officials sent to seal the site.

Salako refused to mention the developer’s name, but told journalists that the police would disclose the identity of the recalcitrant developer.

Six persons were said to have been trapped under the rubble of the seven-storey building from which two bodies were recovered.

Salako added, “Several times, officers of the Lagos State Building Control Agency visited this site and the attitude of the contractor was that of hostility. He used his personal security to stop them from carrying out their lawful duty.”

Also, Olufemi Osanyintolu, the permanent secretary in the Lagos State Emergency Agency, told journalists at the incident scene that the building was earlier sealed on February 18, 2021.

According to available data, Kano and Anambra states follow Lagos in the number of incidents that occurred in the last two years. While Kano recorded four incidents only in 2022, Anambra witnessed four such tragedies in 2021.

Meanwhile, the president of the Real Estate Developers Association of Nigeria (REDAN), Dr Aliyu Wamako, said the unending incidents of collapsed buildings were caused by human errors, and as such, were preventable.

Wamako, who spoke with Daily Trust Saturday on phone, while commiserating with family members of victims of the collapsed buildings, said the stakeholders were not willing to prevent the incidents.

“Professionals are not doing their jobs; any building you see standing should be erected by a professional. If that is not done, it means that anybody can cut corners and do what they want to do. The authorities must, therefore, ensure that professionals are engaged to construct buildings just like what is happening in the REDAN.

“We engage professionals in all our building constructions, so in situations where you see these buildings collapsing, they are not members of the REDAN because they don’t adhere to the ethics and code of conduct of their profession,” he said.

He, therefore, urged urban and physical planning authorities and building experts across the country to take responsibility and work in tandem with laid down rules and end the menace.

Wamako also said the real estate development bill his association sent to the National Assembly, when signed into law, would curb the malaise of building disasters in the country.

Awobodu, who is also a past president of the Building Collapse Prevention Guild, while delivering a paper at the 2022 Engr T. M. Olatunji Distinguished Annual Lecture organised by the Nigerian Institution of Civil Engineers in July, said, “A common sharp practice in the building development sector of Nigeria is the use of a set of drawings for the building plan approval and a different set for the construction of the same building. In this circumstance, the vetted and approved building plan could be altered in height, length or width on site.”

He added, “Some of our professional colleagues, especially town planners, architects, engineers and builders, could not exonerate themselves from an act initiated by clients primarily to maximise gains on building spaces, which might in future endanger building and public safety.

“The advantage of the separation done in the Ministry of Physical Planning and Urban Development was to ensure, through checks and balances, that officials that approved building plans would be different from those monitoring the construction of such buildings. Hence, the practice of non-conformance with approved building plans on site was envisaged to reduce drastically.”

Awobodu also said professionalism was lacking in the Nigerian construction industry, saying the Nigerian building regulatory mechanism is questionable in the eyes of the entire world.

“With a critically negative impression about Nigerian construction industry professionals, the need to save our collective image becomes pertinent. Quackery, poor regulatory framework and weak enforcement apparatus are the bane of building control,” he said.

The president of the Council for the Regulation of Engineering in Nigeria (COREN), Ali Rabiu, an engineer, during a press briefing in Abuja on Tuesday, recommended that a law should be enacted on the enforcement and compliance of the approved national building code, while advising state governments to domesticate the code.

Rabiu, who spoke after a meeting of stakeholders in the building environment, stressed the need for enforcement of the use of standard materials, and urged the government to set up a construction court to handle cases of misconduct.

“There is an unjustifiable overconcentration on the training of high-level manpower without a corresponding emphasis on the lower level; hence we must make concerted efforts to sustainably increase the production of qualified craftsmen, skilled workers, technicians etc through the resuscitation and establishment of crafts technical schools across the country,” he added.