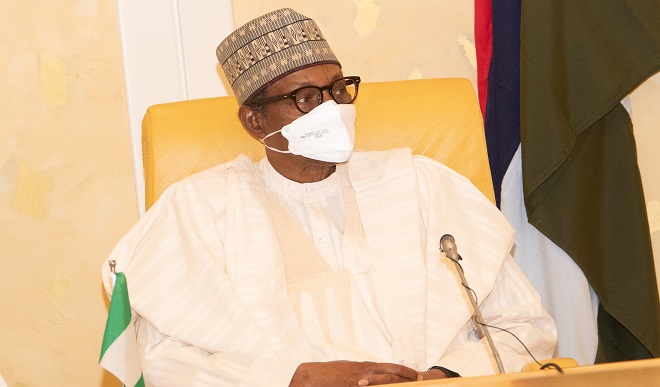 President Muhammadu Buhari on Thursday ordered the deployment of 16 warships and three helicopters to fight maritime crime in the Gulf of Guinea.

The president also flagged off the Lagos-Ibadan rail for commercial operations.

Buhari, who launched the maritime equipment acquired for the Deep Blue Project of the Federal Ministry of Transportation in Lagos, said the deployment of the assets is to ensure a greater action is taken within the country’s water and beyond.

He said the oceans and sea accounts for over 80 percent transportation requirements of the global economy and that concerted efforts are being made to address the security challenges.

The president said it is evident in the recently established Gulf of Guinea Maritime Collaboration Framework by Nigeria and the Inter-regional Coordination Centre Yaoundé through the facilitation of NIMASA/Industry Joint Working Group to tackle maritime security in the region.

The Minister of Transportation, Rotimi Amaechi, blamed the elite who he claimed were profiteering from the state of insecurity in the maritime.

The Director General of the Nigerian Maritime Administration and Safety Agency (NIMASA), Dr. Bashir Jamoh, however thanked the president for ensuring that the project came alive.

While inaugurating the 157-kilometre Lagos-Ibadan standard gauge railway line which extends to Apapa Port, Buhari said containers going to the hinterlands would now be transported through the rail line to the Inland Dry Port in Ibadan, Oyo State.

He said the $1.7 billion project is “another milestone in the drive of this Administration to revitalize the railway system and establish it as a choice mode of transportation for both passengers and freight.”

The project is the Lot2 of the Lagos-Kano standard gauge designed as part of the federal government’s rail modernization agenda.

The President stated that the 2,773-kilometre Lagos-Kano railway, when completed, would “link the Kano – Maradi line at Kano and a rail link from the Nigeria southern ports of Lagos to Maradi in Niger Republic will be achieved.

“This would be beneficial to the economy through employment from new business opportunities and wealth creation,” he added.

Amaechi on his part said the delivery of the project was as a result of the “full support and steadfast encouragement” of the President.

He disclosed that the state governments of Lagos, Ogun and Oyo where the rail line passes through gave the right support towards the realisation of the project.

Governor Babjide Sanwo-Olu of Lagos state said the completion of the project was a testament to the commitment of the President to deliver infrastructures to Nigeria.