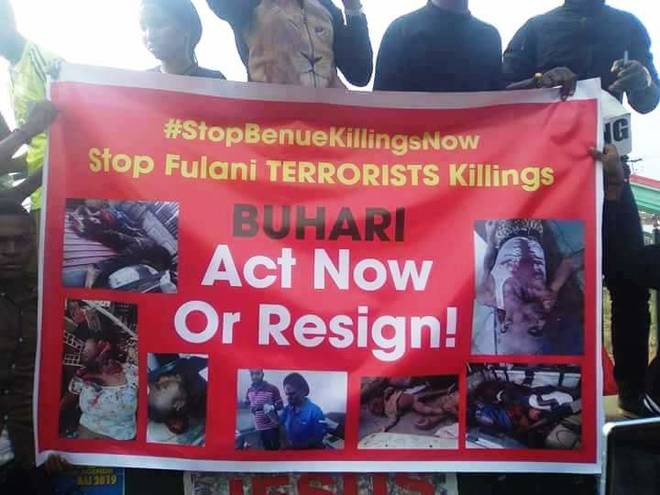 Youths protesting in Makurdi on Wednesday pelted a convoy of Governor Samuel Ortom and a team that had arrived on the protest scene to placate them.

Soldiers and police intervened with gunshots in the air before the governor was removed from the scene and heads of security agencies took cover.

The protesters also barricaded roads and threw stones at security personnel to protest fresh killings in parts of Benue.

Police threatened to teargas the crowd, but the protesters made bonfires, chanted war songs and blocked off at least five roads, causing heavy traffic build-up.

They insisted only the federal government had the might to stop continued killings in Benue, not the governor, insisting the recent attacks were a clear effort to resist the anti-grazing law recently passed in Benue

Police has confirmed the gunmen to be suspected herders, according to its spokesman Moses Yamu.

Later at Government House, Ortom said, "You can feel the anger and pain of the people from the incident that happened this afternoon. We can’t solve this problem by creating another because two wrongs cannot make a right.”

He appealed to the federal government to arrest the leadership of Myetti-Allah Kauatal Hore, who he accused of being behind the renewed mayhem on the rural people of Guma and Logo.

More troops have been deployed to the scenes to quell the protests and open up barricaded roads.