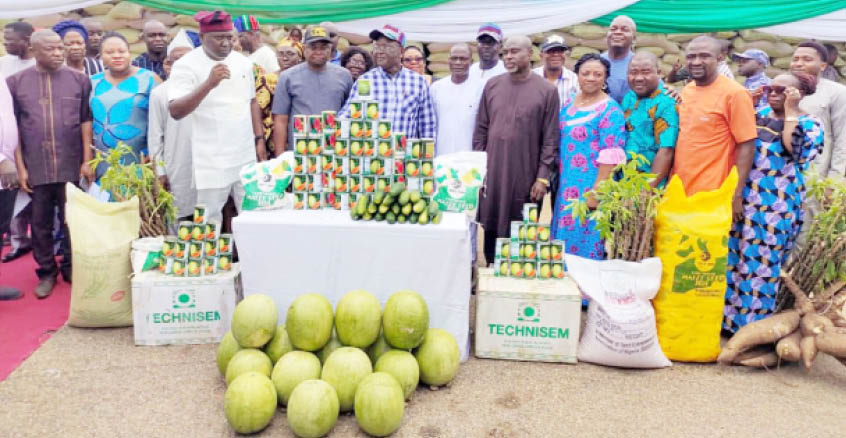 Dignatories at the seed distribution event in Benue

Governor Samuel Ortom of Benue State has flagged off the 2022 cropping season with the distribution of improved seeds to rural farmers in the 23 local government areas of the state.

Ortom, during the ceremony at the premises of the Bureau of Local Government and Chiefteincy Affairs (BLGCA) in Makurdi, at the weekend, directed the council chairmen to ensure that the improved seeds are given to genuine farmers for onward cultivation in this year’s farming season.

The governor commended the Bureau’s Special Adviser, Barrister Kenneth Achabo, for initiating and sustaining the agricultural programme, noting that he was impressed with the results achieved in two years.

He emphasised the need for the people of the state to key into the programme, maintaining that it has added economic value towards boosting the agriculture sub-sector for food security.

Ortom further explained that with two private investors in Makurdi and Ukum as off-takers in cassava processing as its major raw material, the product was already in short supply, calling on the people to engage in profitable agriculture.

He also directed Achabo to liaise with the agriculture departments of local governments to organise a seminar for farmers on best modes of cultivation of the improved seeds to produce the needed result.

Earlier, Achabo had lauded Governor Ortom for the premium he has placed on agriculture and his exploits in transforming the rural sector just as he appealed to the local government chairmen to ensure that the seeds are put to proper use.

In a vote of thanks, the chairman of Guma Local Government Council, Dr Mike Ubah, who spoke on behalf of the 23 council chairmen, appreciated the special adviser for initiating the agricultural programme in collaboration with the state government and assured that the real farmers in the local governments will benefit from the improved seeds.