Algeria 2023: We will defeat Ghana in Abuja, says Salisu

The head coach of the Super Eagles B, Salisu Yusuf has expressed his confidence in turning around the 2-0 loss to the Black Galaxies of… 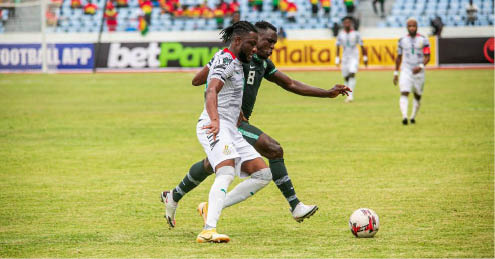 The head coach of the Super Eagles B, Salisu Yusuf has expressed his confidence in turning around the 2-0 loss to the Black Galaxies of Ghana.

In the first leg of the last round of qualifiers on Sunday at the Cape Coast Stadium, Ghana defeated the Super Eagles B 2-0 to take the lead in the tie.

Yusuf, while speaking to NFF TV after the game, blamed the loss on the harsh officiating leading to the penalty while dismissing a repeat of the Super Eagles to qualify for the FIFA World Cup at the hands of the Black Stars.

“The World Cup miss has come and gone and here we are again, This is football. The penalty was a big blow to my team and we believe the referee was a little bit harsh for that penalty. We can still turn around the result,” he said.

Daniel Afriyie Barnieh and Seidu Suraj of Hearts of Oak scored goals in the second half to give Ghana a convincing victory.

However, the Black Galaxies coach, Annor Walker, has promised that his team will defeat Nigeria at home to secure a spot in the upcoming Africa Nations Championship (CHAN).

After the game, the seasoned coach emphasised that he and his team would not allow Nigeria to reverse the outcomes in Abuja, claiming that the Black Galaxies had qualified for the competition.

“We are done with the first leg; we will be going back to the drawing board with my able assistant coaches tomorrow before we depart Ghana on Thursday.

“We also have some friendlies before the return leg, we will plan for a strategy because we cannot sit down for the Nigerians to overturn a two-goal deficit. We will make sure we win or fight for what we have to qualify the team in Nigeria. For sure, we are qualifying for CHAN,” he added.

Ghana has missed out in the last three editions and is close to making a return to the tournament. The second leg of this tie comes off next Saturday at the Moshood Abiola National Stadium in Abuja.

Meanwhile, the Nigerians have arrived the country while the Black Galaxies are expected to leave the shores of Ghana on Thursday evening.