President Muhammadu Buhari last Thursday, at exactly the same period a year ago, presented to the National Assembly the 2021 appropriation bill with a N13.1… 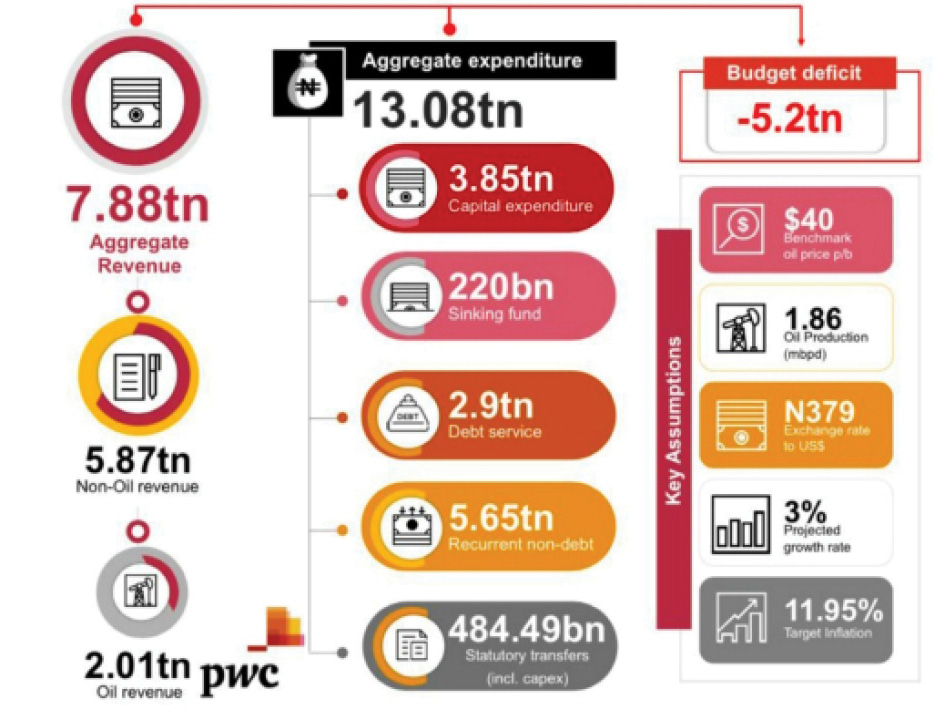 President Muhammadu Buhari last Thursday, at exactly the same period a year ago, presented to the National Assembly the 2021 appropriation bill with a N13.1 trillion expenditure target.

That was the earliest presentation of a budget since November 2017; however, he will be sending the Finance Bill 2020, which sets out revenue and fiscal policy plans for 2021, to the lawmakers for final consideration and approval.

In this piece, Daily Trust aggregates the experts’ analyses on the prospects and likely hitches for the budget implementation.

According to analysts at Afrinvest, the 2021 budget is overly optimistic considering the weak prospects of strong revenue collection due to the COVID-19 pandemic and the historical trend of poor budget performance.

An analysis shows the government’s revenue projections underperformed actual collection by 47.8 per cent in 2017 with slight change at 44.7% in 2018, 41.1% in 2019 and 28.2% by first half of this year. Although revenue collection in H1:2020 was significantly impacted by weak oil price and COVID-19, currency devaluation provided reprieve.

The analysts noted that while the revenue assumptions seem quite conservative, the broader weakness in the non-oil economy would affect collection.

The government projects oil revenue at ₦2trn, at an oil price forecast of $40/barrel, 1.86 million barrels per day, and N379 per dollar indices. The revenue figure is 4.8% lower than the ₦2.1trn for 2020 budget.

The analysts said there may be weak implementation capacity for the next year’s budget. The N13.1trn budget rose by 21.3% from the N10.8trn of 2020 clearly showing the optimism however, there are clear challenges of dwindled revenue.

“The government’s proposed expenditure is not large enough to support the country’s growth aspirations at 8.0% of GDP,” they also argued.

There is a heavy non-debt recurrent expenditure at ₦5.7trn (43.5% of the budget), reflecting increased payroll obligations; then debt servicing cost of ₦3.1trn or a 23.7% chunk of the budget which is also 14.8% higher than 2020’s.These are the red indicators on the smooth implementation, they noted as they argued that such huge expenditure is a drag to human capital and infrastructure spending.

On the projected at ₦3.9trn for capital expenditure, Afrinvest commends that but said revenue challenges mean that implementation might suffer.

Another case is the overboard on the budget deficit. At ₦5.2trn, or 3.6% of GDP, it is 0.6% higher than the 3.0% threshold allowed by the Fiscal Responsibility Act 2007, and this the second year budget is exceeding fiscal deficit.

On this, they expect the government to finance its budget deficit mainly through domestic borrowing (₦4.3trn) from the debt market and the Central Bank of Nigeria (CBN), and through multilateral and bilateral sources (₦709.7bn).

The current low interest rate environment domestically would provide a respite to debt servicing cost in the short term to medium term.

Analysts at Cowry Asset Management commended the Federal Government’s decision to sustain the January to December budget cycle given the need to set the country’s economic activities in motion early in the year.

They however noted that the government had significantly increased borrowings to N25.28trn in June 2020 from N10.43trn in June 2015, with less impact on infrastructure that would have boosted its revenue over time.

“With new borrowings of N4.25trn, future revenue may be stifled amid high debts service. Hence, we expect the Federal Government to work on reducing its cost of governance in order to free up cash for capital projects; and further encourage public private partnership in delivering infrastructure.”