The National Drug Law Enforcement Agency (NDLEA) has arrested no fewer than 192 drug traffickers between January and September, in Ebonyi State. The agency also… 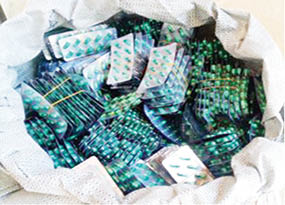 The National Drug Law Enforcement Agency (NDLEA) has arrested no fewer than 192 drug traffickers between January and September, in Ebonyi State.

The agency also seized 113.414kg of cannabis Sativa, Mr Iyke Uche, the NDLEA commander in the state, disclosed this in an interview with NAN on Tuesday.

He added that 0.0621kg of methamphetamine, locally known as mkpuru mmiri, was also seized within the period under review.

On the level of drug trafficking in the state, the commander said Ebonyi had low drug business but with many consumers.

He said, “There is no prevalence of drug business here in Ebonyi, but there are consumers.

“We counselled a total of 92 drug users in the state in the period under review.

“Most crimes usually take place with the intake of drugs, of course, there are drug-enhanced violent crimes.

“So, we will intensify effort on sensitization. We are going to strengthen campaigns in schools in order to nip drug abuse in the bud in the state.” (NAN)