A witness said the herdsmen marched all passengers of one bus into the bush while some passengers on the second bus managed to escape. 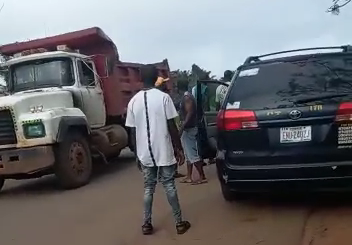 Panic has gripped residents of  Eke-Onuimo, in Onuimo local government area of Imo state following the abduction of 15 passengers along Enugu-Port Harcourt road by suspected herdsmen.

The passengers were travelling on two separate buses when the herdsmen stopped them along Arondizuogu-Okigwe stretch of the road.

A witness said the herdsmen marched all passengers of one bus into the bush while some passengers on the second bus managed to escape. The whereabouts of the passengers remain unknown.

A video has emerged of people believed to be the escaped passengers reappearing at the scene. They include four women sobbing on the roadside as other travellers and passersby converged.

In the video circulating on WhatsApp, one distressed woman narrated her ordeal with kidnappers she escaped from.

“They led us into a huge forest. They just point at you and tell you to follow them,” she said.

“There are some of us whom they sized up and said ‘these ones look like they have rich parents’. I told them I was pregnant, and that’s why they let me go.”

Imo police did not comment on the incident when Daily Trust first reached out. Spokesperson, SP Bala Elkana, could not be reached as his phone rang unanswered.

But he has responded to the circulating video on a WhatsApp group for police media.

“As regards the video making rounds on the Internet, we have not gotten any brief regarding the incident. We will keep [you] posted as soon as we get any credible information,” his office said.