One of the leading goal scorers in the Nigerian topflight, Abdulazeez Yusuf of Gombe United has said he is confident of emerging the Highest Goal… 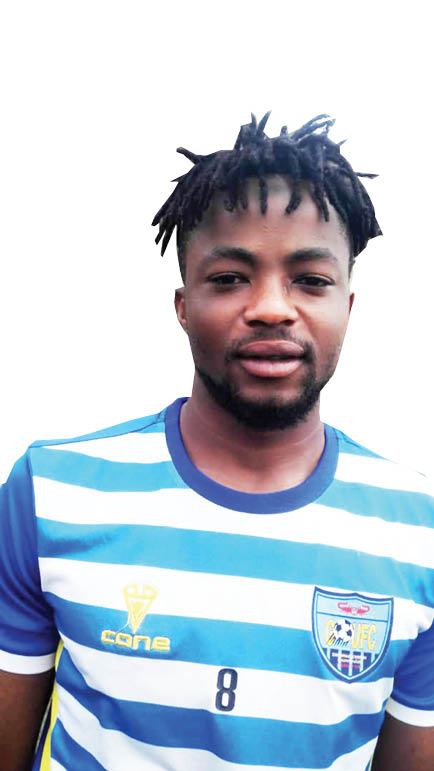 One of the leading goal scorers in the Nigerian topflight, Abdulazeez Yusuf of Gombe United has said he is confident of emerging the Highest Goal Scorer in the 2022 Nigeria Professional Football League (NPFL) season. In this interview with Trust Sports, the Kwara State born prolific striker who is on 15 goals spoke on how he started playing football, the secrets behind Gombe United’s success and his future plans.

When and how did you start playing football?

Like most Nigerian players, I started playing football right from my primary school days. When my parents allowed me to play football as a career, I started with a club in Akure from where I moved to Zamfara State. It is from Zamfara that I moved over to Gombe United in the Nigeria Professional Football League (NPFL).

Why did you choose football ahead of other sports like handball basketball, volleyball and a host of others?

My choice of football was a natural one. I have passion and interest in football more than other sports. Right from my childhood, I knew I would excel in the game of football so it wasn’t difficult for me to choose it ahead of the rest. Thank God, I am not doing badly in football.

How much support did you get from your parents when you started playing football?

Unlike others whose parents tried to stop them from playing football, my parents gave me all the necessary support. They saw that I was passionate about football so instead of discouraging me, they gave me their blessings. It may interest you to know that one of the reasons behind my success is my parents.

How satisfied are you with your performance for Gombe United in the ongoing season?

I have every reason to be grateful to almighty Allah for his protection and divine provision. My performance so far is not bad. At the moment, I am among the leading goal scorers in the NPFL. It is a thing of joy because there are even older and more experienced strikers in the league who are yet to score a goal. I have hit double digits already so I believe I have not done badly. I am also happy that my goals have brought so much joy to the good people of Gombe State.

You are among the highest goal scorers. Do you see yourself winning the award at the end of the season?

It is a tight contest because at the moment, Chijioke Akuneto of Rivers United is leading the race with 16 goals and I am joint second with Victor Mbaoma of Enyimba with 15 goals while Ishaq Rafiu Kayode of Rivers United has 14 goals to place third in that order. Despite the closeness of the race for the Golden Boot, I am quite confident that at the end of the season, I will be crowned the goal king. But like I said, it is not going to be easy. Some of these guys like Victor Ombaoma have been around for sometime so I know they will give me a hot chase for the award.

You are confident of winning but how many goals are you targeting and what are you doing to make it possible?

I don’t want to limit my chances by setting a target for myself. What I want is to keep scoring goals till the end of the NPFL season. We have five more matches to play so the opportunity is there for me to score more goals. I am not going to rest on my oars. I know that if I take my leg off the pedal, my rivals will definitely leave me behind. So, I am focused on helping my team and ensuring I score more goals to emerge the Highest Goal Scorer.

What would you say is responsible for the good performance of Gombe United in the current season?

I attribute our success story to the unflinching support from the government and people of Gombe State. In addition, we have in place a management committee made up of sound football administrators who are committed to the success of the club. And above all, our coaching crew is led by a dynamic and astute tactician in the person of coach Aliyu Zubairu. In fact, everyone in the club is contributing his quota to the success of the club.

Out of 33 matches played by Gombe United, which is your best match?

My best match in the current season is our match against Dakkada FC in Uyo. I scored the only goal that gave us our first away victory. It was a special feeling for me and my team mates.

Do you see Gombe United finishing among the top five clubs in this season?

The most important thing is that we have no relegation troubles. We returned to the topflight at the beginning of the season but we are among the top 10 for now so I think this is a major achievement. However, we are working hard to end above the 9th position we occupy presently.

What is your ultimate dream as a football player?

Like any other talented African football player, my dream is to play professional football in Europe where the game is better managed. I have seen changes in the lives of those who have left to play in Europe so I want to be there. It is a matter of time.

How soon do you hope to play for the Super Eagle?

Putting on the green-white-green jersey is my ultimate dream. I know that God will make a way for me. I cannot say how soon it is going to be but I am over eighty per cent sure of playing for the Super Eagles.

Who is your favourite player in the Super Eagles?

My favourite players in the Super Eagles are captain Ahmed Musa and Moses Simon. They are good players and my desire is to succeed like them.

Who is the football star you want to meet the most?

Of course, there are so many football stars around the world but I can’t say this is who I want to meet. So to answer your question, I will say no one for now.