The simmering crisis in the Yobe State chapter of the All Progressives Congress (APC) has been amicably resolved. This follows the adoption of the candidature… 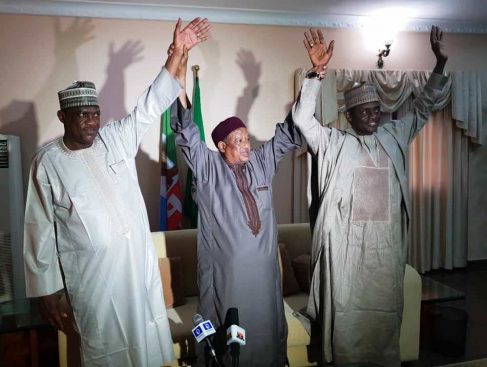 L-R: Yobe State Governor Ibrahim Gaidam, Senator Bukar Abba Ibrahim and the National Secretary of the APC, Mallam Mai Mala Buni during a peace meeting to resolve the crisis in the state chapter of the party. PHOTO BY: Abbas Jimoh

The simmering crisis in the Yobe State chapter of the All Progressives Congress (APC) has been amicably resolved.

This follows the adoption of the candidature of the National Secretary of the APC, Mallam Mai Mala Buni as the consensus governorship candidate of the party in 2019, by Senator Bukar Abba Ibrahim, who also stepped down for the incumbent Governor Ibrahim Gaidam to contest for the Yobe East Senatorial seat.

Addressing newsmen on Tuesday at the end of a meeting brokered by elders and stakeholders of the party in the state, Senator Bukar, who had hitherto vowed not to step aside for Governor Gaidam and to re-contest his senatorial seat, said the state’s interest is paramount to him.

“This is a political season and we had series of meetings, some covered by the media and some not covered in camera. At the end of it all, we reached a conclusion.

“A couple of weeks ago there was a consensus in Damaturu, some people were nominated and those of us not invited complained and at the end of the day, this matter was resolved. We are one APC family and all issues have been resolved and all those nominated were endorsed,” Ibrahim said.

Governor Gaidam in his comment said he was happy like other stakeholders that the crisis was amicably resolved.

While referring to Senator Ibrahim, who was also a former governor of the state as ‘the grandfather’ of politics in the state, he also pledged to be consulting him when the need arises.