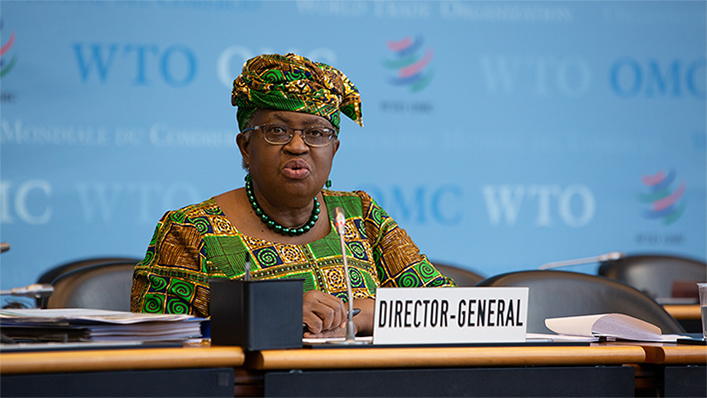 Okonjo-Iweala disclosed this at a news conference on Wednesday in Abuja.

The 12th conference is scheduled to hold in Geneva in December.

The News Agency of Nigeria (NAN) reports that the DDA, known as Doha Round is the latest round of trade negotiations among the WTO membership.

It is aimed at achieving major reform of the international trading system through the introduction of lower trade barriers and revised trade rules.

NAN gathered that the African groups in WTO are seeking for this negotiation which has agricultural package to be addressed, demanding for a special safeguard mechanism for developing countries.

In spite of several efforts by some developed countries to undermine the DDA, the African Groups have stood their ground because it has to do with food security, subsidy on agriculture which distort trade and employment.

The WTO director-general, however, noted that the negotiation on the agenda was yet to be completed during the round and was still hanging.

“There are some specific mandates as you know that developed and developing countries did not see eye to eye.

“There are some specific mandates on agriculture package, we think we could make progress may be even at the WTO Ministerial Conference.

“We will have some kind of outcome on Public Stock-holding for food security purposes on which developing countries want to have the ability to have reserves.

“This is in case they have difficulties feeding thier population, they can buy grains or whatever products in times of plenty and store them to be able to sell later.

“But there are countries, who are concerned about wether goods are being subsidised, wether they are sold later in the open market thereby undermining the ability of the free market to function,” she said.

According to her, “there is potential to come to an agreement on the public stock holding for food security issues, so we could deal with that.”

She said there was also a possibility to deal with the humanitarian exception to restricting the world food programme from buying food freely for humanitarian purposes.

This, she said was , also being discussed and almost every country had agreed except two countries.

Okonjo-Iweala, who assumed duty as the first female and African D-G of WTO on March 1, was on her first working visit in Nigeria.

In the course of spuring economic growth, she had met with President Muhammadu Buhari, various ministers and key players in health sector.

In view of boosting trade and investment, she had engaged Otunba Adeniyi Adebayo, Minister of Industry, Trade and Investment and Minister of State, Amb. Mariam Katagum.

The former Nigerian Finance Minister also interracted with captains of industries on view of bringing their trade challenges to the fore for WTO’s intervention.

She also featured in roundtable discussions organised by Nigeria Export Promotion Council (NEPC) and International Trade Centre (ITU) for entrepreneurs and women in trade on ways to remove administrative bottlenecks on export.(NAN)