Women and children in the FCT communities of Adagba, Gurdi, Tekpeshe, Kutara, Rafin-Daji, Lafiya Yaba, Mayaki and Gulida, all in Abaji Area Council, have deserted… 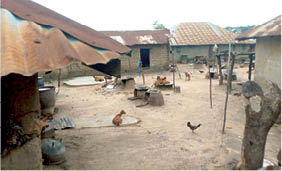 Women and children in the FCT communities of Adagba, Gurdi, Tekpeshe, Kutara, Rafin-Daji, Lafiya Yaba, Mayaki and Gulida, all in Abaji Area Council, have deserted their homes after bandits threatened to attack them.

City & Crime, which visited some of the communities on Sunday, observed as many houses remained deserted with only few villagers, especially men, were seen in groups under trees, while some were working on their farms along the road.

A resident of Adagba, Yakubu Ibrahim, who was seen working on his farm, told our reporter that he was forced to move his two wives and children out of the community because of the threat of the bandits.

He said many men had also relocated their wives and children over fear of being attacked by the bandits, adding that he stayed back because of his farm.

He further said, “I had to move my wives and children to Yangoji. I don’t sleep in here. After I finish work on the farm I move to Yaba to sleep and come back the following morning.”

The Village Head of Adagba, Abdullahi Mayaki, told our reporter that his subjects, especially women and children, deserted the village over fear of being attacked by bandits.

He said, “Some of my subjects have to stay back after moving their families out to Yaba, Abaji and Yangoji over fear of the bandits’ threat. And another thing we are facing here is that herders have taken advantage of that to move their cows and eat up our crops.”

He revealed that the bandits sent a message through the abducted victims at Tekpeshe who were set free that the villagers should get ready as they would be coming.

Our reporter, who also visited Tekpeshe and Gurdi villages, saw only a few villagers.

Usman Aliyu, a resident of Gurdi, said the villagers were living in fear because of the activities of the bandits.

He said, “That was how they threatened to attack the neighbouring Zago village in Niger State, and today, they have sacked the entire village. In fact, the Village Head of Zago has relocated to Abaji with his family.”The District Head of Gurdi, Alhaji Bala Mohammed, was not at home when our reporter visited, as he was said to have travelled to Yaba on the invitation of the Etsu Yaba, His Royal Highness (HRH), Alhaji Abdullahi Adamu, for a meeting over the security situation in the area.

City & Crime further gathered that Wednesday’s attacks came four days after the neighbouring communities of Kpada and Yaba were attacked during which at least one person was killed.

The spokesman of the Niger State Police Command, ASP Wasiu Abiodun, could not be reached for reaction on the development as he did not pick calls put across to him.

Also, spokesperson of the FCT Police Command, DSP Adeh Josephine, did not reply to an SMS on the development.