Why the Sullubawa have not ruled Zaria for 163 years – Yero

Shehu Yero is one of the oldest surviving descendants of Emir Abdulsalam, who ruled Zazzau as the 7th emir between 1853-1857. Yero gives a detailed… 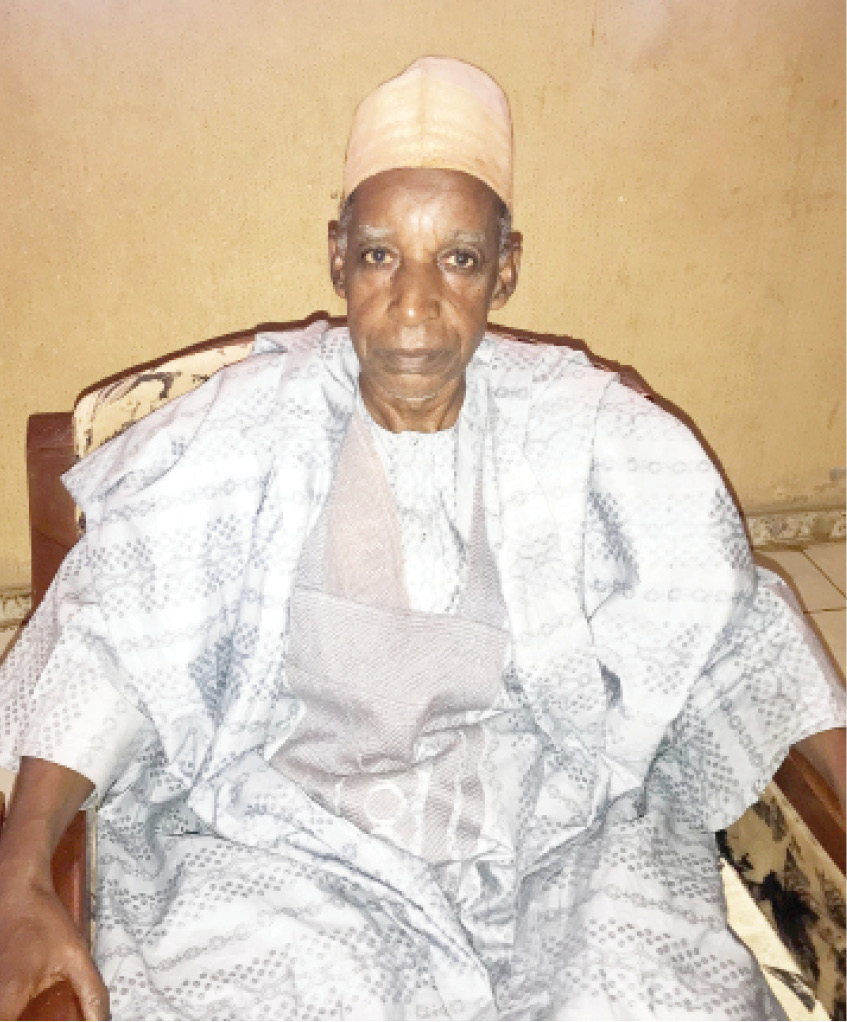 Shehu Yero is one of the oldest surviving descendants of emir Abdulsalam from the Sullubawa clan, who ruled Zazzau as the 7th emir between 1853-1857.

Shehu Yero is one of the oldest surviving descendants of Emir Abdulsalam, who ruled Zazzau as the 7th emir between 1853-1857. Yero gives a detailed history of the Sullubawa clan; one of the four royal Houses of Zazzau, detailing how Abdulsalam became emir by consensus and how more than a century-old pronouncement by him may have kept the throne away from the House.

Can you share the history of the Sullubawa clan of Zazzau?

Our family came from Sokoto long before the Jihad of Shehu Usman Dan Fodio and they requested from the then authority in Zaria to live in Zaria and were granted permission and allocated Unguwan Bishar. They had plenty of cattle and so after some time, they separated. They were three brothers from the same father. Muhammadu Lawal moved to Igabi with his entourage and cattle, Ibrahim moved to Richifa in present day Soba LGA with his entourage and cattle and Malam Adamu moved to Kusallu also in Soba with his entourage and cattle. They were all highly Islamic scholars and when Shehu Usman Danfodio declared Jihad, Muhammadu Lawal In Igabi directed his eldest son, Abdulsalam, and his brother to come back to Zaria to participate. After Musa ruled Zaria from the Mallawa dynasty, Yamusa was next from the Bari-Bari and then Abdulkarim from Katsinawa and the fourth emir was Hammada who was the son of Yamusa from Bari-Bari clan. He ruled for less than a year then passed away. His brother, Muhammadu Sani ruled from the Bari-Bari and was the one who appointed our great grandfather, Malam Abdulsalam, as Galadiman Makaman Zazzau. So, he was the one who first appointed him into the ruling House of Zazzau. He ruled for less than a year before he also passed away and Abdulkadir Sidi from Mallawa became the emir and promoted Abdulsalami from Galadiman Makama to full Makama and he became a full member of the emirate council. The then emir found Abdulsalami useful because of his vast Islamic knowledge. During the rulership of Abdulkadir Sidi, something happened and some of the princes from the ruling houses complained about him to the Sultan of Sokoto and he was summoned. After hearing from him, he was deposed as emir of Zazzau. The Sultan then asked the emirate council to choose an emir among themselves and there was a tussle because there were three ruling houses then. The Mallawas were there, the Bere-beris and Katsinawas were there and they could not agree on one person. The Sultan then requested Malam Sidi, the deposed emir to nominate someone who will succeed him but also rule Zazzau justly and he nominated Malam Abdulsalami, our grandfather and the other Houses also agreed and so he was turbaned as the 7th Emir of Zazzau.

That means there were only three ruling houses at the initial stage and the Sullubawa came later?

Exactly. That was how we came to be one of the ruling Houses of Zazzau – by being a consensus candidate. Ibrahim who had settled in Richifa came back with his entourage to Zaria and they are now occupying Unguwan Karfe in Zaria city. They are all our cousins and Sullubawas. Malam Adamu who was in Kusallu moved on to Kano and we were made to understand that his daughter met and married another Basullube and produced Dabon Kano, the great grandfather of the current emir of Kano. Malam Lawal stayed in Igabi but sent his son Abdulsalam and Adamu back to Unguwan Bishar in Zaria.

Since then, how come no one from the Sullubawa clan has become emir?

Even though Abdulsalam was a consensus candidate, when they came back to Zaria, he had a very tough time from the other ruling houses, his brethren and his own brother Adamu and cousins from Unguwan Karfe gave him a tough time. So, he stayed in Zaria for only one year before he declared Jihad and he left Zaria. He moved to the southern part of Kaduna up to Nasarawa where he was on Jihad for three years. While there, some princes hired a hunter to follow him to the war front and kill him. They gave the hunter a special arrow made of silver and he was told that the best time to kill him was during salat al-Khawf when the army is divided into two; one is praying with the Imam and the others are fending off the enemies.

He was told to target him when the first batch had left and the second batch was yet to come and they shot him at current day Karu now in Abuja territory but his camp was at Kugwaro in Nasarawa State. After he was shot, they brought him back to his camp in Kugwaro and he asked them to bring out the head of the arrow and when he saw that it was silver, he said: “this is because of the duniya (world) and I leave it for them but whoever shot me with this arrow, my family and his family will do takaba (period of mourning) together.”  And we were told that was what happened because the hunter also died. So, his people who were for him are still in Kugwaro and they are also Sullubawa. When you go to Kugwaro now, there is Kugwaro Hausa and Kugwaro Gwari and I was privileged to have an interview with the Sarkin Kugwaro Gwari and his Sarkin Yaki told me that his own grandfather was the one who backed Abdulsalam to the camp when he was shot.

Is that why no one from your clan has become emir for more than 150 years?

After him, Emir Abdullahi became Emir of Zazzau also from Beri-beri. Since then, no one from the Sullubawa has become emir. The circumstances of Abdulsalam’s election as emir is corroborated by an English author M.G Smith in his book titled Government in Zazzau, 1800-1950. Oral history recorded that before he died, Abdulsalam had made a statement that his immediate descendants will not be emir of Zazzau until a very long time. And if you go to some big malams’ houses in Zaria, you will hear the same story. But when Emir Abdullahi died, Abdulsalam’s son, Muhammadu Sani was to be turbaned but he died in Sokoto and then Emir Yero was turbaned. When Emir Yero died, the junior brother to Muhammadu Sani, Malam Usman, also a son of Abdulsalam was to be turbaned but Emir of Zazzau Kwaso said there will be war and Malam Usman said blood will not be shed because of him and so he stepped down and Kwaso was turbaned. During Kwaso’s emirship, he declared war on Suleja because the people had moved from Zaria to Suleja when Jihad was declared by Usman Dan Fodio. Kwaso decided he was to go and defeat them and Usman was among the people and so he died in Suleja.

Do you think your dynasty is going extinct?

No. We are growing and in due course, someone from our dynasty will, by the grace of God, become the emir of Zazzau. Even the late emir of Zazzau, whenever he was asked about the rulership of Zazzau, he mentioned four – there is no way we will be forgotten because we are part of history.

Did anyone from Abdulsalam’s descendants indicate interest in becoming the 19th emir?

Let me say that maybe because of our low profile, some people are trying to key into Abdulsalam’s family, claiming that they are part of the family for their own ambition. There are sullubawas all over, the people of Unguwar Karfen Zazzau and the people of Riji Zazzau are sullubawa, they are also our relations. The present Dangaladiman Wazirin Zazzau who indicated interest in the throne is a Basullube but a member of Adamu’s family and Adamu was a younger brother to Abdulsalam. But he is not from Abdulsalam’s line.

But he is the only traditional title holder from the Sullubawa clan.

Despite Shehu Idris’ recognition of the Sullubawa, why were you not given titles?

Do you think the low profile of the Sullubawa has a connection with your inability to get it?

No. Those who matter in Zaria know us and they know we are there.

The 19th Emir of Zazzau was recently presented with a staff of office by Governor Nasir El-Rufai, how do you feel about that?

Believe me, the entire Abdulsalami’s family went and pledged our loyalty to him and we assured him of our support. If I tell you that I am happy, it will be an understatement. I wasn’t happy when the matter was taken to court because it’s not in our tradition. Once the emir has been selected, and you contested and lost, you support the new emir because there will be only one emir at a time. His appointment was in order being from the Mallawa dynasty that have not ruled for 100 years and in our own case, it is about 163 years. But by the grace of God, sooner or later, a Basullube will become the emir of Zazzau.