"I welcome our prince, Tadenikowo Adesoji Aderemi Eri-Ifeoluwasimi and the mother to the palace of Ile Oodua. The almighty will exalt him and divinely make… 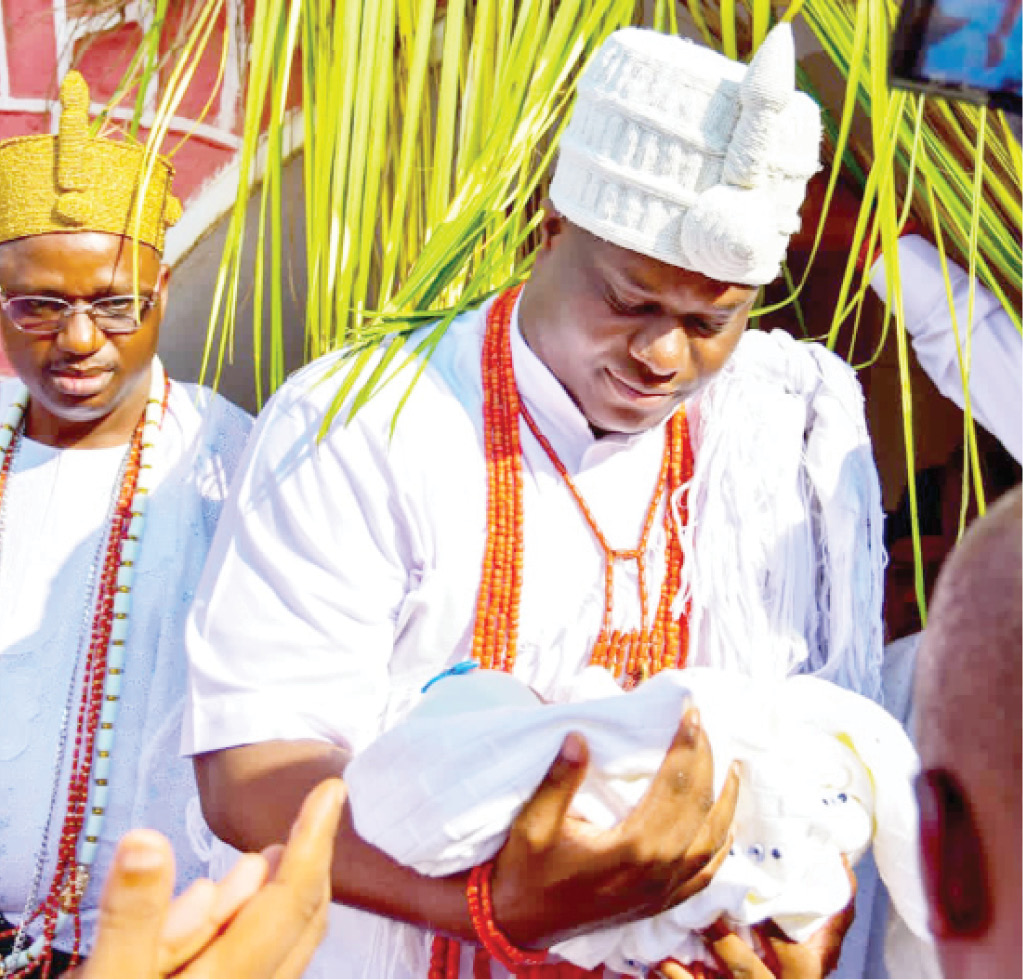 Ooni and his new born child

“I welcome our prince, Tadenikowo Adesoji Aderemi Eri-Ifeoluwasimi and the mother to the palace of Ile Oodua. The almighty will exalt him and divinely make him the best,” the Ooni of Ife, Adeyeye Enitan Ogunwusi, Ojaja II said when he received his newborn baby at the palace in Ile-Ife.

The traditional ruler could not hide his joy over the birth of the new prince, even as chiefs and other people of Ife were also delighted.

The prince was born on Wednesday, November 18, 2020. According to Yoruba tradition, his birth was greeted by three phases of 21-day rites.

Ife was agog on Tuesday when the newborn baby and his mother, Queen Shilekun Ola Ogunwusi arrived at the palace in a motorcade. They were ushered into the palace through Enu Geru and received by Ife elders, led by the Obalufe of Ife, Oba Idowu Adediwura and chiefs, including the Lowa Adimula of Ife, High Chief Adeola Adeyeye and the leader of the Emeses, Sarun Oriowo Oyeyemi. Family members, friends and associates also joined in welcoming the baby into the palace.

The Lowa Adimula of Ife, High Chief Adeola Adeyeye, said the 21-day traditional rites for the prince were important for people to understand the culture and tradition of naming princes, following the legacy established by Oduduwa.

“It is important for people to understand the culture and tradition of naming princes in line with the legacy established by Oduduwa Olofin Adimula, the progenitor of the Yoruba race. That’s what we have done for the new prince.”

Oba Ogunwusi had pledged that he would name the new prince after his predecessor, the 49th Ooni of the 3rd dynasty and first African governor of the old Western Region in Nigeria, Sir Tadenikawo Adesoji Aderemi, who reigned from 1930 to 1980.

At the palace courtyard, the prince and his mother stopped at Ile-Nla, where the monarch’s immediate family members also welcome them; then they proceeded to Emese’s court, where the prince was finally handed over to his joyful father, Ooni Ogunwusi, who came out through the sacred Ile Igbo shrine in accordance with the full culture and tradition of Ile-Ife, as always observed whenever a reigning Ooni receives his newborn prince into the palace after the necessary rites of 21 days.

After receiving his son, Ooni Ogunwusi, accompanied by relevant spiritual aides, swiftly took the baby straight into the inner chamber of Ile Igbo.

Palace spokesman, Moses Olafare, explained that the spiritual rites were part of the necessary confirmation to establish the blood lineage of Oduduwa.

The monarch later came out from Ile Igbo with smiles and majestic dance steps and welcomed by thunderous shouts of “Kabiyesi o!’’ from the waiting crowd, who watched with excitement and jubilation as he handed over the prince to his elated mother, who danced with the baby in her hands to her apartment.

Ooni’s palace was full of activities as various people across the country came in droves to witness the grand entry of the prince and the subsequent handover to the joyous father, who was seeing him for the first time since he was born three weeks ago.

In line with the cultural legacy established by Oduduwa Olofin Adimula several centuries ago, the newborn prince was not brought out publicly until after the completion of the 21-day rites. His naming ceremony took place at the palace without the baby.

For three weeks, different rites were performed as part of cultural activities to welcome a new prince into the palace. Olafare said, “Naming ceremonies for newborn princes and princess start with the traditional movement of the Ooni from his private residence in the palace to the sacred Yeyemoolu well to offer prayers and traditional rites before moving through various palace chambers – from Ile Ogun to Ile Odikeji and Ile Omirin, finally to Ile-Igbo to mount the oldest stool of Oduduwa at Ile Igbo, where a reigning Ooni occasionally sits whenever there is a very important event.”

After the prayers and sacrifices, the Ooni consulted the Ifa oracle through the Araba Agbaye, head of Ifa priests worldwide, before making the baby’s names public. Names of the prince handed by Araba Agbaye to High-Chief Lowa of Ife, Chief Adekola Adeyeye who officially pronounced them to the anxious crowd are: Tadenikawo, Adesoji, Aderemi, Eri-Ifeoluwasimi, Adeiwa, Inioluwa, Ademide, Adegbite, Diekoloreoluwa, son of Ogunwusi.”

Meanwhile, many people have been congratulating Oba Ogunwusi and rejoicing with him on the birth of his son.

Reacting to the birth of the new prince, one of Oba Ogunwusi’s admirers, Feyi Esan Emily, said God used the prince to silent the traditional ruler’s enemies. “Lord I bless you for this joy that silenced enemies and adversaries. This joy is permanent in Jesus Christ name, Amen.’’

In his reaction, Aare Alaboo Abiola Olayemi said, “Prince Tadenikawo Adesoji Aderemi Ogunwusi, welcome to the House of Oduduwa.’’ He also prayed fervently for the prince as he congratulated Oba Ogunwusi and his wife.

Also expressing joy over the birth of the prince, Olagbaju Ojuolape said, “Prince Tadenikawo Adesoji Aderemi, welcome to your father’s palace. Congratulations Baba. I am very happy for you, Yeyeluwa, Ile-Ife and the entire Yoruba race. Congratulations.