No fewer than 58,000 travelers entered Nigeria through the Murtala Muhammed International Airport (MMIA), Lagos between September 5, when the airport was reopened, and December… 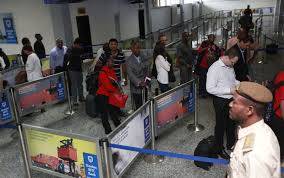 No fewer than 58,000 travelers entered Nigeria through the Murtala Muhammed International Airport (MMIA), Lagos between September 5, when the airport was reopened, and December 14, the Nigeria Immigration Service (NIS) said.

Also, 37,000 departures were processed during the period translating to 95,000 inbound and outbound travelers. NIS disclosed that 60 Nigerians majorly females were refused departure during the period under review for failing to provide the necessary traveling documents.

But the NIS commander at the airport, Abdullahi Usman, in a chat with newsmen, explained that most of those refused departures were travelling to Middle East and Europe without convincing evidence that they would return to the country.

Usman, however, said the people refused departure were counseled on the right things to do if they want to travel out so that they don’t become liabilities in another country.

He also disclosed that in the last three months, at least 75 Nigerians have been deported from Europe and America for immigration related-offenses and drug trafficking.

Similarly, another 22 foreigners have been stopped from entering Nigeria within the period under review due to visa issues.

Speaking further, Usman said the recently launched Forensic Data Machine by the service had helped to verify any claim of missing or stolen passports. With the machine, he stated, it would be difficult for people to hold two or multiple passports.