‘Why I went underground’, Nnamdi Kanu speaks in court

Nnamdi Kanu, leader of the Indigenous People of Biafra (IPOB), has given reason for going underground after he was granted bail in 2017. Justice Binta… 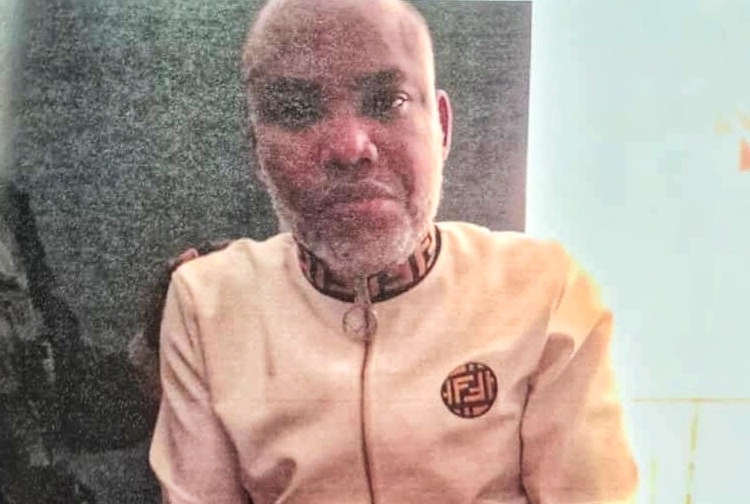 Nnamdi Kanu, leader of the Indigenous People of Biafra (IPOB), has given reason for going underground after he was granted bail in 2017.

Justice Binta Nyako of the Federal High Court in Abuja had granted Kanu bail on health grounds in 2017.

Nyako had barred the IPOB leader from granting press interview while on bail.

The judge also gave a stern warning to the defendant not to participate in any rally or be found in a crowd of more than 10 persons in the course of the bail.

But Kanu flouted all the bail conditions and eventually fled abroad, from where he incited his followers.

On Tuesday, counsel to the Attorney General of the Federation (AGF), Shuaibu Labaran, told the court that the defendant (Kanu) had been arrested and produced in court.

Labaran urged the court for an order detaining the arrested IPOB leader at the DSS facility pending the hearing and determination of the matter.

Justice Nyako, who granted the plea, adjourned the matter until July 26 for trial continuation.

However, no sooner had the judge ruled than Kanu indicated his interest to talk.

He told the court that he decided to go underground because his house was raided but he was able to escape.

Kanu said if he had not escaped, he might have been killed like other members of the group.

The judge advised Kanu to get across to his lawyer for the trial.

The News Agency of Nigeria (NAN) reports that Kanu was arrested on Oct. 14, 2015 on 11 count charge bordering on terrorism, treasonable felony, managing an unlawful society, publication of defamatory matter, illegal possession of firearms and improper importation of goods, among others.

A judge at the Federal High Court, Abuja revoked Kanu’s bail that was granted him on health ground and issued a bench warrant for his arrest on the same date, over his failure to appear in court for hearing.

He has, upon jumping bail, been accused of engaging in subversive activities that include inciting violence through television, radio and online broadcasts against Nigeria and Nigerian State and institutions.

Kanu was also accused of instigating violence especially in the Southeastern Nigeria that resulted in the loss of lives and property of civilians, military, para military, police forces and destruction of civil institutions and symbols of authorities. (NAN)