A dismissed naval rating, Ekeh Ifeanyi, has admitted wearing his old uniform to escort trucks carrying goods for stipends. Ekeh, who was recruited into the… 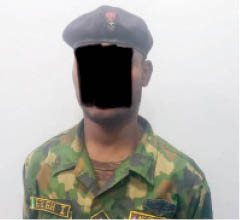 Ekeh, who was recruited into the Nigerian Navy (NN) in 2010, was dismissed from service one year later over an undisclosed offence.

The police said the suspect was arrested on Wednesday by officers attached to Orile Police Station, Lagos, and that during interrogation he admitted being dismissed from the navy in 2011.

He told the police that, “I served at NN Ordinance Depot, Ojo, and I was dismissed from there. I wear my old navy camouflage to escort goods in and out of Lagos for stipends. I use the proceeds to feed myself.”