Which Nigerian goalkeeping greats should Alisson Becker take tutorials from?

By Victor Akhidenor It is not yet Valentine but Liverpool’s goalkeeper, Alisson Becker, is already a “wife” to players from Manchester City. The Brazilian may… 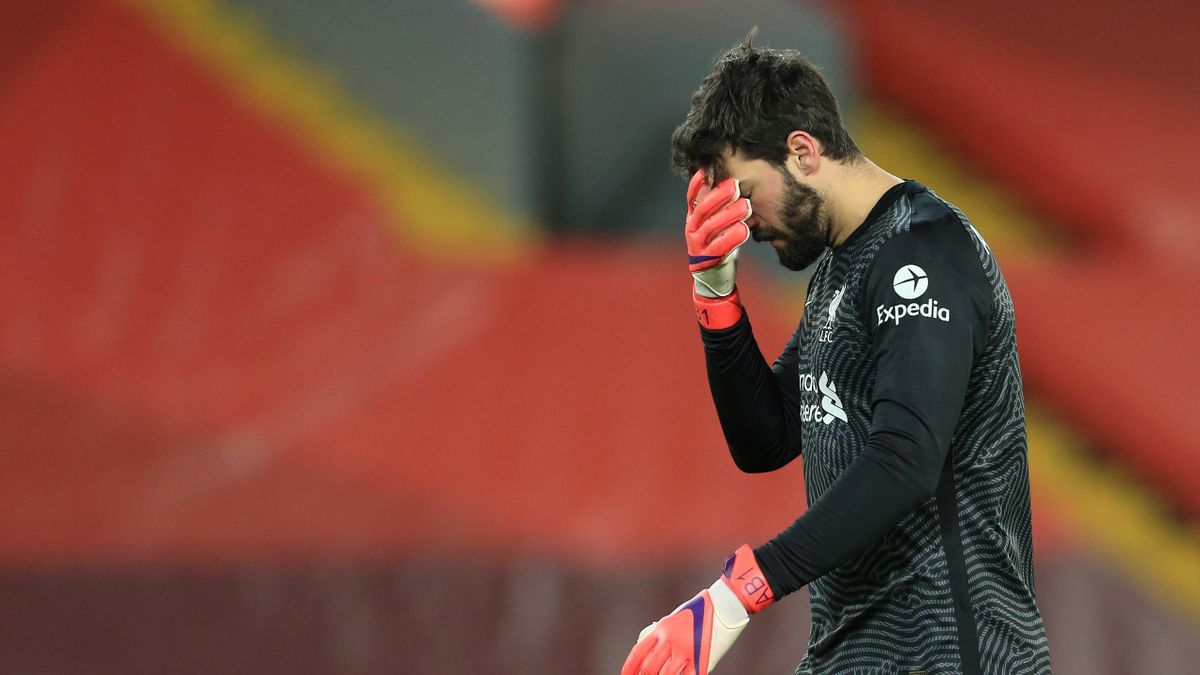 It is not yet Valentine but Liverpool’s goalkeeper, Alisson Becker, is already a “wife” to players from Manchester City. The Brazilian may well need tutorials from Nigerian goalkeeping greats after two mistakes from him killed the game for his side and resulted in a 4-1 defeat to title rivals on Sunday.

Mohamed Salah’s 63rd-minute penalty had cancelled out the opener from Ilkay Gundogan but with the match evenly-poised at 1-1 with 17 minutes remaining the Brazil international’s errant passing saw him give the ball first to Phil Foden and then Bernardo Silva, resulting in another goal for Gundogan and Raheem Sterling’s first at Anfield since leaving in 2015.

Foden blasted home a fourth late on to consign Liverpool, 10 points behind City at the top of the Premier League having played one match more, to a third successive home league defeat for the first time since 1963.
Becker is obviously very disappointed with his performance and we reckon what must have been going on his is mind was like “not today, not today”. Well, today is Tuesday and the keeper has four days to regain his confidence as his team faces Leicester City in their next league game.

How about a tutorial from seven of the finest goalkeepers Nigeria has ever produced? Becker, here’s your free course from (un)Coursera! So, what are the training objectives? Well, after this crash course, Becker should be able to regain his confidence and reclaim his position as the best goalkeeper in the world.

Before we write a brief biodata of our seven shortlisted “teachers” of Alison Becker, we need to address an important matter. What makes a good goalkeeper? There are lots of qualities to consider, however, we narrow it down to:

It’s quite tough arriving at only seven names from a long list of goalkeepers that have played for the country. But Becker has limited time to “recuperate” from Sunday’s dent to his image. In case you are wondering, the title of the course, FOR RISE, is got from the first letter of the surname of Nigerian goalkeeping legends.

Brilliant saves, a great catch just as a forward was about to connect with a bullet header, rushing out to break down an attack, and the odd penalty saves, all add up to the rest of the team trusting in Peter Fregene between the sticks. Fregene was as gifted as his immediate predecessor, Inua Rigogo, though he never tried to overly impress with an individual display. Although indiscipline may have affected his career, like Rigogo, Fregene enjoys a distinction of being the inspiration to a crop of goalkeepers who came after him.

A poor goalkeeper can lower confidence, to the point where the fans and rest of the team hold their head in their hands every time an opposition player lines up a shot. Whenever Emmanuel Okola was in goal, no teammates or fans exercised such fears. A late developer, Okala stood out and his aura reflected his colossal size. He could consider himself lucky to have been around at a time the country had quality players at both the national and club levels. While he was not overly gifted in natural talent and technical ability, he was not totally deficient in these areas. Certainly, he was one of a kind. A rare breed.

Great goalkeepers will improve confidence in the team and inspire his teammates to perform better. Rigogo fits the bill, perfectly. A controversial personality, Rigogo was the ultimate in raw talent – an asset which greatly hid his average technical ability. His emergence in the mid-sixties and subsequent take-over of the number-one shirt marked the transition to the modern goalkeeping era in the country. He brought colour and artistry into the craft as he continually thrilled the fans, confounded his teammates, and kept opponents in awe with an uncanny display of flexibility and courage. However, he was a certified delinquent who was constantly at war with himself, match officials, and football authorities. It cost him dire in 1968 as he was dropped from the team going to the Olympics in Mexico.

If players don’t trust their keeper, the pressure on them to perform will increase. This can lead to more nerves and an increased risk of making errors. Errors which the goalkeeper will undoubtedly not be able to deal with. Those are the pictures of Peter Rufai of 1998 World Cup, especially in the 4-1 loss to Denmark in the second round. It’s quite understandable. Becker, please erase that from your memory. In fact, delete it. Look back at Maroc ’88, Tunisia ’94, and US ‘94 for the real Rufai. At his best, he was a trojan at the goal post. He was a creative goalkeeper whose sharp reflexes and long reach enabled him to make difficult saves.

A great goalkeeper can be the difference between success and failure, and for nine years, Sam Ibiam made the difference for the national team. Tall and lanky, Ibiam started off as a centre-forward. His career took off in 1945 on the completion of his secondary school education at Hope Waddell Institute, Calabar. He was selected as one of the 18 players to represent Nigeria in the tour of the UK – thus becoming Nigeria’s first goalkeeper. He featured in all the matches, except the opening game in which the reserve goalkeeper, Isaac Akioye, was in goal. He had natural skills, technical understanding, and personality. He introduced diving to goalkeeping in the country.

Before a goalkeeper even uses any part of his body to touch the ball, he should be making constant adjustments to his position in relation to where the ball is on the field of play – even off the pitch. Ike-Anobi was a master in positioning. No fancy saves; no drama just to thrill the fans. He got the job done with minimal fuss. He endured a long and harrowing period in the shadows of Rufai, Alloy Agu, and Wilfred Agbonavbare before he finally broke into the Super Eagles starting team. And when he did, he became the undisputed first choice.

The best goalkeepers of all time have been leaders on the pitch. They organised their backline, inspired their team, lifted confidence, and commanded respect. Enyeama exhibited these qualities in the thirteen years (2002-2015) he served the country. With 101 games under his belt, he’s Nigeria’s most capped player and Nigeria’s last great goalkeeper since quitting the national team. Alisson Becker won’t quit the game just yet. He will rise again!