What you need to know about ownership, operations of Nigeria Air

Barring any last-minute changes, Nigeria’s national carrier – Nigeria Air, is set to start operations soon, according to assurances from the federal government. It could… 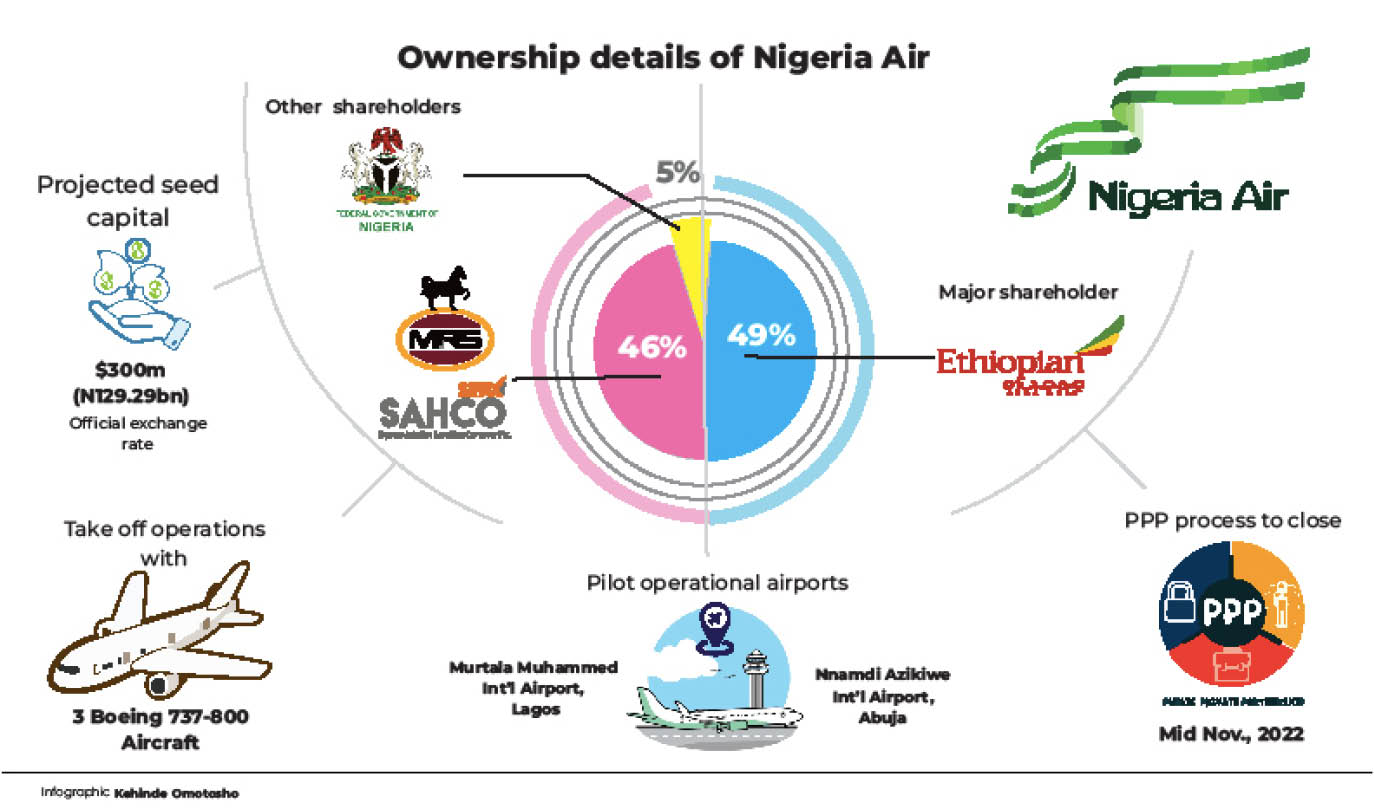 Barring any last-minute changes, Nigeria’s national carrier – Nigeria Air, is set to start operations soon, according to assurances from the federal government.

It could be recalled that Nigeria Air, which was unveiled at the Farnborough Air Show in England on July 18, 2018, was suspended two months after it was announced following concerns raised over its relevance and sustainability.

However, the federal government debunked the concerns, saying the airline will take to the skies before the end of 2018, following President Muhammadu Buhari’s commitment to launch a national airline during his administration.

Subsequently, in July this year, the Federal Executive Council approved the leasing of three aircraft to enable the airline commence operations at a later date.

Checks by Daily Trust show that although the airline is christened ‘Nigeria Air’, the major shareholder is Ethiopian Airlines, which is the flag carrier of Ethiopia, and is wholly owned by the country’s government.

A breakdown of the ownership of Nigeria Air shows that Ethiopian Airlines holds the highest stake as the core investor with 49 per cent shareholding.

It is followed by a consortium of MRS Holdings Company Limited, a pan-African conglomerate of companies diversified in oil products and services, and Skyway Aviation Handling Company Plc (SAHCO), a leading airport and aviation service provider with 46 per cent shareholding.

According to the minister of Aviation, Sen. Hadi Sirika, Nigeria Air will be launched with three Boeing 737-800 planes suitable for the Nigerian aviation market.

He said an interim executive team of highly skilled aviation experts has been working since February to set up all the necessary regulatory and industry requirements to launch the national carrier.

“All executives have been approved by NCAA; the Air Transport License has been issued by NCAA. Nigeria Air (after having identified the first three aircraft) will now finalise all necessary operation manuals and then go through the inspection and approval process of NCAA,” Sirika said.

Furthermore, Sen. Sirika explained that the money spent for the launch of Nigeria Air – on all the requirements to establish an AOC and be admitted to start airline operations – is within the 5 per cent capital investment of the Federal Government of Nigeria.

He noted that it would be the overall need to establish the national carrier initially for the AOC approval and everything else required by stringent national aviation regulations, as prescribed in the FEC-approved Outline Business Case (OBC).

Sirika added that “It is the overall share capital of around $300 million provided by the preferred bidder that would launch Nigeria Air to its full size of 30 aircraft and international operations within the next two years.

“No further FGN funding will be provided above the 5 per cent share capital of the next national carrier of Nigeria, which was provided to launch Nigeria Air,” Sirika also said.

How the bidding process went

Checks by Daily Trust show that an invitation to bid for the ownership of Nigeria Air under the Public-Private Partnership (PPP) regulations of the Federal Government of Nigeria and overseen by the Infrastructure Concession Regulatory Commission (ICRC) was published in the Economist and several Nigerian papers on March 5, with a deadline for the Request for Proposal (RFP) set for May 10, but was later extended to June 10.

Accordingly, all the details of Nigeria Air, including the Outline Business Case (OBC) and the financial model, were established by the Transaction Advisor on March 15.

Subsequently, a bidders’ conference was held online on March 28, with over 100 participants, and over 60 parties requested access to the data room.

On June 10, the Ministry of Aviation was said to have received on time one closed bid by the Ethiopian Airline Consortium.

“Few others attempted to submit, but unfortunately could not meet the deadline. Since we did not collect the bids, we are not in a position to say who they are,” the aviation ministry said.

The ministry said the evaluation team for the process comprised 11 experts from ICRC, FMFB & NP and FMA and that the TA met on July 20 and 21, and again on August 1.

It said, “The Ethiopian Airline Consortium bid was formally opened in the presence of a representative of Ethiopian Airlines, checking that all envelopes were closed and sealed at that point, 11am on 20th July, starting with the Technical Bid.”

The financial bid was opened, again under the observation of the Ethiopian representative, on July 21, the ministry said.

It said, “The Ethiopian Airline Consortium bid was formally opened in the presence of a representative of Ethiopian Airlines, checking that all envelopes were closed and sealed at that point, 11am on 20th July, starting with the Technical Bid.”

The financial bid was opened, again under the observation of the Ethiopian representative, on July 21, the ministry said.

It said all 10 forms, as required by the RFP, were evaluated by the team and that, unanimously, the assessment team cleared the technical bid, which had a total score of 89 per cent out of 100.

At another meeting on August 1, the statement said the team assessed the financial bid further and graded it with a score of 15 per cent out of 20.

“The Ethiopian Airline Consortium got a combined score (Technical and Financial Bid) of 86.7%,” it further stated.

Consequently, the aviation ministry said “The Ethiopian Airline Consortium was declared the preferred bidder” and that the evaluation team would proceed with the “Due diligence phase’ (completed for all consortium partners on 15 Sept. 2022); Contract negotiation between the preferred bidder and FGN; Development of the Full Business Case (FBC); Issuance of compliance certificate for the FBC by ICRC and Approval of FBC by FEC.

An aviation expert, Kunle Bamidele, said the national carrier, when it takes to the sky, may likely dislodge local carriers that are currently struggling.

“The coming of Nigeria Air will likely be at the expense of the domestic airlines, which are struggling to survive owing to the forex crunch and the high cost of aviation fuel.

“Therefore, it will put domestic airlines, which won’t be able to compete with the bulk purchase of fuel, or the dollars that appear to be available to the national carrier, at a disadvantage. So instead of increasing the market, the market will retract.

“Also, three aircraft, which the national carrier is coming up with, could displace 10 aircraft of airlines currently struggling. When supply retracts, prices will go up.

Meantime, a public affairs commentator and senator, who represented Kaduna Central, Senator Shehu Sani, has noted that with 49 per cent stake by Ethiopian Airlines, the federal government cannot comfortably name the national airline as ‘Nigeria Air’.

On his Twitter handle @ShehuSani, he said, “Ethiopian Airlines is wholly owned by the Government of Ethiopia, they will also own 49% of our national carrier.”