What to know about Psychosis illness

Esosa often saw people chasing after him at home and in the office who other people around him could not see. He also kept narrating… 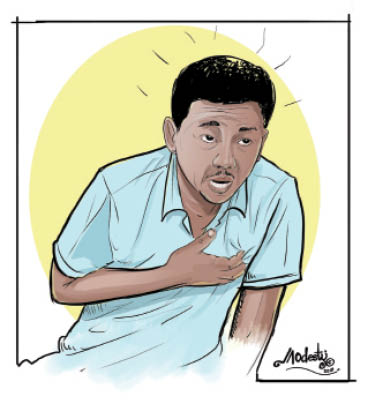 Esosa often saw people chasing after him at home and in the office who other people around him could not see. He also kept narrating events that never happened.

His family got worried and took him to the hospital. He was diagnosis of psychosis, a form of mental health disorder.

Dr Israel Aina, a consultant psychiatrist at the University of Benin Teaching Hospital (UBTH), said psychosis illness refers to a broad range of mental illnesses or any mental illness in which people are not in touch with what is real.

“So, if there is any mental illness that makes an individual not to be in touch with what is reality it is referred to as Psychotic illness.”

According to him, there are many kinds of mental illnesses but the most common are schizophrenia,  delusional disorder and substance-induced psychotic illness.

He said some of the common beliefs on mental illness are that sufferers are aggressive and dangerous; that people with mental illnesses are witches and wizards, that a mentally-ill person must have done bad things in the past and that the person was being punished or paid back in his or her own coin.

Dr Aina, who is also the Head of Mental Health in the hospital, said there is no one risk factor but several individual risk factors for psychotic illnesses. For instance, if one had a head injury that makes such a person prone to psychotic illness.

There is also family history; if a family member has mental illness, there is likelihood another can also develop it and that stress that is overwhelming for an individual is also a risk factor.

He added that substance use, like Indian hemp, difficult upbringing, people that have suffered physical and emotional abuse, could make one to be prone to mental illness.

According to him, there are different types of mental illnesses and that diagnosis criteria differ and depend on the kind of psychosis illness.

“For instance, like the one we call schizophrenia, the diagnosis can be made when the person has any of the following symptoms and must have lasted for four weeks.

“If a person hears voices of people that he or she can’t see in clear consciousness, that can suggest schizophrenia. When somebody thinks that his actions or behaviour are under the influence of external people or agents, something that is responsible for how he behaves or acts, that can also schizophrenic illness.

“Also, when somebody thinks that his thoughts are not known to him or her alone, it is also schizophrenia. These are some of the things we can use to diagnose schizophrenia, which is one example of psychotic illness.”

The experts said the treatment of psychosis is multi-dimensional because it involves psychiatrists, psychotherapists and social workers, depending on the nature of the ailment.

He explained that “after diagnosis, we use antipsychotic drugs to help the individual, after that, you now deal with what might have caused the ailment.

“For instance, if you discover that the person lost a job, or lost a dear one that made him develop psychotic disorder, you have to provide a job for such a person otherwise the illness will resurface again and that is the social aspect.

“So in treating psychotic illness,  we use medication, social treatment and talking therapy.”

Dr Aina advised that people should take life easy as much as possible, watch over friends, colleagues and relations.

He added that people should not allow stress to overcome them, and should try as much as possible to stay healthy and not stigmatise anybody with mental illness but find a way to help.