A notable columnist and founder/chief executive officer of The Cable, an online newspaper, Simon Gbenga Kolawole, is releasing a selection of his essays in a… 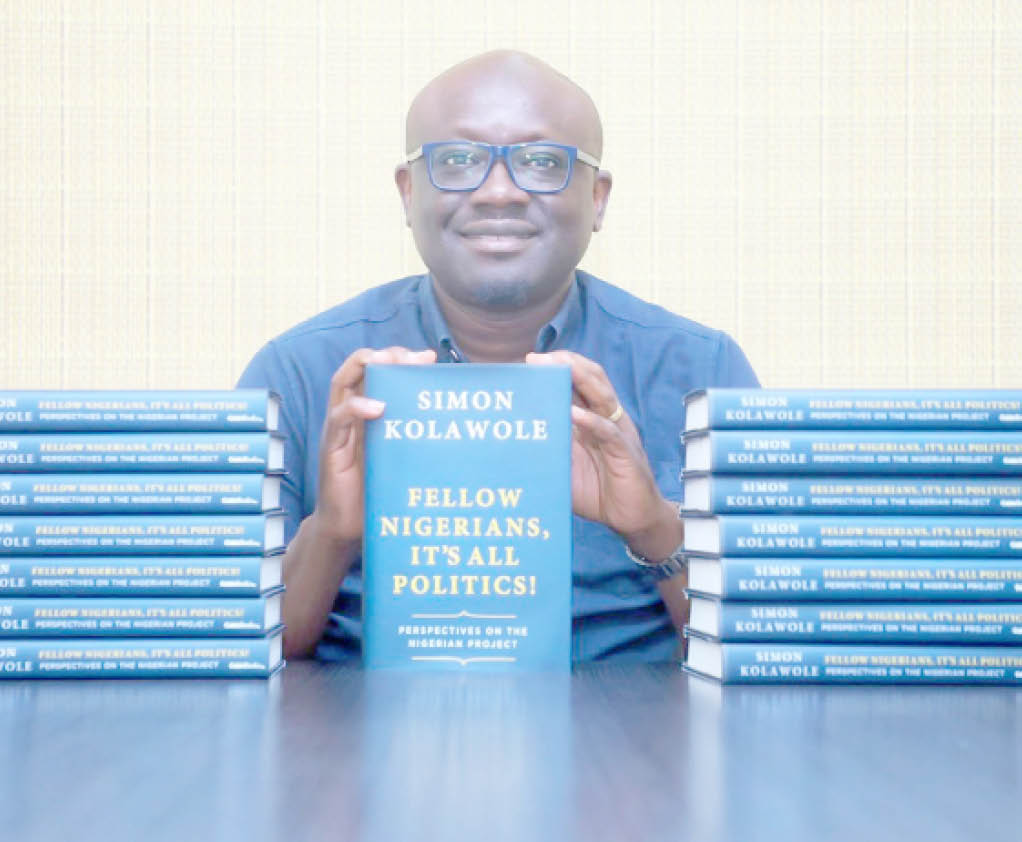 A notable columnist and founder/chief executive officer of The Cable, an online newspaper, Simon Gbenga Kolawole, is releasing a selection of his essays in a book titled, ‘Fellow Nigerians, It is all Politics’, this week. In this interview, the onetime editor of THISDAY (2007-2012), who has been writing a weekly newspaper column with focus on socio-political and economic issues in Nigeria since 2003, spoke about the major threads in the book and why politicians should be subjected to more scrutiny to avoid “pulling the wool over our eyes.”

You have been a journalist for decades. At what point in your career did you pick up a column, and what’s the experience thus far?

I have been writing columns for quite a while. My first experience was as an undergraduate at the University of Lagos. In 1990, my friends and I were on the founding team of a campus magazine called Campus News. It was owned by Hajiya Khadijat Ibrahim, a businesswoman who was also our classmate. I was the editor-in-chief and my friend, Mallam Lanre Isa-Onilu, was the deputy editor-in-chief. My column was named ‘Pointblank’ and I can remember expressing scepticism about the calibre of politicians jostling to succeed Gen Ibrahim Babangida then. I left the publication after the first edition.

Nigeria and the season of seasoned tongues

I also wrote a sports column in UNILAG Sun, the newspaper produced by the Mass Communication department. My next attempt was at PMNews, a Lagos-based evening newspaper, where I wrote a weekly sports column called ‘In a Jiffy’. I wrote witty stuff on sports news. That was in 1994 or 1995. I wrote ‘On the Ball’, a weekly sports column, in THISDAY in 1997. It came out every Monday on the sports pages.

My next attempt at THISDAY has now survived for over 19 years: Simon Kolawole Live! When I started it in 2003, it was meant to feature interviews with newsmakers, delivered in prose. After a few months, I was tired of chasing people to interview. I changed it to commentary and so it has remained till today. It has been a great experience for me. I have upgraded my knowledge of several areas, particularly in politics and economy while doing research for my write-ups. I have made friends and foes. I have been praised and pilloried. People have told me ‘I read you every Sunday’ and people have also told me ‘I don’t read you anymore’. The feedback that also fascinates me is ‘I read what you wrote last week but I don’t agree with you’. I love it because you can disagree with me without hurling insults in my direction. Generally, the quality of public debate in Nigeria is not great. Emotions usually trump facts and logic in the public spac, but we have to get on with it.

Many readers praise your column for its lucidity of prose and temperate tone. Was this a deliberate choice from the outset or it developed over time?

I like clarity and I would say it has always been there from when I started writing. I try to make things simple so that everyone will understand me without having a headache. I try to keep to short sentences and avoid words that will make the reader go looking for a dictionary. As a student of communication, I write to, pardon the pun, communicate. The moment the reader does not understand me, then I have not achieved my aim.

I think my temperate tone came along the line. I used to be more hard-hitting until I took a one-year break in 2005/2006 to study for a master’s degree in Governance and Development at the University of Sussex in the United Kingdom. I used the opportunity to unlearn some things and relearn other things. I reflected deeply on my role as a journalist in the development of Nigeria and concluded that if I really wanted to make impact, I had to be more constructive. Saying there is a problem and attacking those I thought are responsible for the problem may be attractive, but proffering a solution to the problem is the real deal. I toned down criticism, became more analytical and started focusing on how Nigeria can work for the good of all, no matter the religious, ethnic and regional differences. A Yoruba adage says it is those who are digging a grave that are ready to bury the dead. Crying and wailing will not bury the dead.

A selection of your essays is coming out in book form under the title, Fellow Nigerians, It’s All Politics. Are these: the title and timing of the release deliberate or coincidental with the 2023 politicking?

When President Olusegun Obasanjo and Alhaji Atiku Abubakar started fighting ahead of the 2007 presidential election, with Obasanjo trying to stop Atiku from succeeding him, I wrote an article just before the election with the title: “Ladies and Gentlemen, It’s All Politics.” My argument was that contrary to the claims by Obasanjo that he was fighting corruption, and contrary to claims by Atiku that he was trying to save Nigeria’s democracy, both of them were just politicking and the interest of Nigeria was not their motive as they were publicly claiming.

There was a time I actually believed politicians when they said they were doing something in the interest of Nigerians, democracy or accountability. I used to fall for it. But I started getting close to politicians and observing their conduct; the things they do behind the scene compared to what they say in the newspapers. It dawned on me that they were just using us to play games.

As we prepare for the 2023 elections, the politicians are back in town, promising us heaven on earth and talking about zoning, power shift, Muslim-Muslim ticket, and all what-not. When you read the articles I wrote over the years on electioneering, you would think Nigeria is permanently on replay. Not much really changes about the methods and tactics of our politicians. It is just the principal characters that change. The game is the same.

The release of this book now is coincidental. I would be happy if Nigerians would be more circumspect the way they defend or promote politicians. We need to subject them to serious scrutiny. They get away with murder all the time by pulling the wool over our eyes. It is all politics.

A major thread in the book is the attribution of Nigeria’s challenges to politics and politicians. Why did you arrive at that conclusion?

What is the purpose of politics? I would say it is to be played for the greater good of the society. It should not be solely for personal gain. The object and subject of politics should be the welfare of the people. Are the people safe and secure? Do they have clean water? Can the health care system attend to their needs and save their lives? Are the schools good enough? Are the roads motorable? However, when you don’t understand the purpose of politics you will misuse and abuse it.

I have looked closely at the kind of politics we play in Nigeria and many other countries and concluded that if we are to make progress, politicians must change course. They are more obsessed with winning power but they don’t know, or care to know, the purpose that power is meant to serve. Some take power as a licence to lord it over us, to gather a congregation of the latest cars in town, travel to Dubai every weekend for fun, oppress us, and all that.

The day Nigerian politicians begin to practise politics of purpose, the country will change. It will be like magic. If competent and patriotic politicians take the reins of power at local, state and federal levels, Nigeria will become one of the most advanced countries in the world in a matter 16 years. That is my opinion, derived from reading the development histories of Taiwan, Japan, Korea, Rwanda, Botswana, Singapore and Indonesia.

How did Nigerians develop this instinct of politicisation of almost every issue?

This is a tough question. I think human beings are political by nature, why our own seems more pronounced is that we are a country of three major ethnic groups and two major religions. With the intense rivalry over resources that are concentrated in the hands of the government, there is bound to be bad blood in the polity. We will always fight over the distribution of the national cake, as we call it, and the intense rivalry will always see us magnify our fault lines to the detriment of national unity, peace and progress. It is an unhealthy competition. Someone will support federal character in the morning and oppose it in the evening, depending on where he thinks his bread will be buttered. When a member of your ethnic group does something wrong you will defend him, but if he is from another ethnic group, we will criticise him. If government becomes peripheral to our everyday living and an average Nigerian does not need them to put food on the table, the tension will die down and we will become more rational in discussing issues.

What do you hope readers would take away from this book?

I think I made a good pitch that Nigeria can work under certain conditions, one of which is the delivery of good governance by a purpose-driven leadership. Nigeria has everything to be great. We are like a sheepfold without a shepherd. For the leaders to get us out of the woods they need to put governance above politicking. The other thing I want readers to take away is that there is nothing new under the sun. Most of the crises we are facing today have precedents. It is the intensity that differs. We need to learn from history so that we can debate the progress of Nigeria from an informed position, not the usual sectional sentiments. Thirdly, I want our leaders at all levels to examine their consciences if they are really giving their best to this country. They should look at the poverty around them and ask themselves if things could be better than they are now. They should play less politics and focus their energies on providing good governance. Everything cannot be politics and politics cannot be everything.