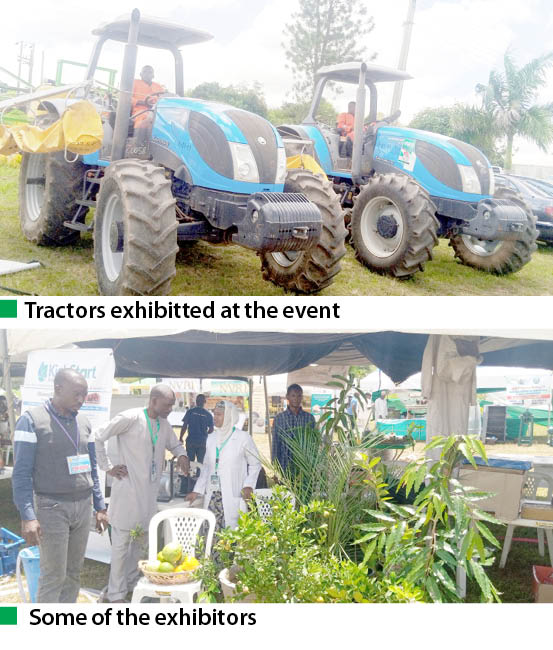 The meeting, which had the theme ‘Strengthening Agricultural Value Chain Development Process for Food Security and Economic Development,’ also presented the opportunity for cross-fertilization of ideas, paper and memoranda presentations, technical sessions and goodwill messages.

While the meeting was going on inside the Leisure Park conference hall, the vast field of the park played host to exhibition of different agricultural and poultry products, seedlings, fishery, irrigation tools/manual pumping machine, tractors display, chemicals, among others.

Speaking at the event, Plateau State Governor, Simon Lalong, said the state was an agrarian state with the capacity and potential to feed the nation.

The governor said investors ready to do business in the state, particularly in agriculture, manufacturing and industry are assured of access to land and other incentives to support their endeavours.

“I dare say that there is no better place to hold this event because Plateau State is an agrarian State with potential to feed the nation and do so in style, using its exotic crops that are not grown in other parts of the country.

“There is no better time than now for stakeholders to convene a meeting to brainstorm on best strategies and policies to tackle hunger which is threatening the general well-being of Nigerians,” he said.

Lalong further explained that his government has over the last seven years given enormous attention to agriculture by ensuring the provision of farm inputs such as tractors, fertilizers, chemicals, improved seedlings and many more towards ensuring that farmers benefit from the natural endowments of the state.

According to him, farmers have been empowered through the cooperative societies and farmer associations in the production of many crops and assorted vegetables that are unique to Plateau environment.

“For those who are ready for commercial farming, Plateau State has one of the friendliest business environments with mouth-watering offers for land acquisition. Indeed, our land charges and ground rents which have been discounted several times are meant to serve as incentives for investors.

“Many who have taken advantage of this situation are reaping the fruits of their investments and expanding their businesses,” he added.

He also said that with the designation of the Yakubu Gowon Airport Heipang as an International Cargo Airport, commercial farming of various crops, assorted fruits and flowers will expand in the state because of the possibility for direct export through the airport.

He explained further that his administration has recently bought over the Inland Container Terminal situated very close to the Heipang Airport which again compliments the evacuation of agricultural products from Plateau to other parts of the country and abroad.

Lalong also used the opportunity to call on the federal government to come to the aid of the state in tackling the potato blight disease which has devastated many farms and caused heavy losses to the farmers.

Recall that the Plateau State Commissioner for Agriculture, Hosea Finangwa, recently declared that potato farmers in the state cultivated about 150,000 hectares of land in the 2022 farming season, but lost 52,000 hectares to potato blight. The loss has been estimated to be about N18 billion across the state.

The Minister of Agriculture and Rural Development, Dr Mohammad Mahmood Abubakar, solicited the active participation and support of all agricultural stakeholders for the facilitation of rural infrastructure, research and innovation, credit and insurance, extension services and agribusiness investment in the country.

This, according him, would enable food and economic development in Nigeria.

He said agriculture remained a key sector in the country as it is not only feeding millions of people, but also contributes towards the overall development of the economy, adding that it has been consistently prioritized by successive administrations towards ensuring food security and attaining national development plans.

Meanwhile, some of the farmers, who came from all parts of the country to exhibit their products spoke with Daily Trust on their products, as well as shared their experiences of the event.

She said for the nation to be food sufficient, it must intensify research and fund it adequately because that is the bedrock of agricultural development, especially that there is growing quest to move from manual to mechanized farming.

On his part, the CEO of N.E. Agro Allied LTD, Rabiu Toro, said apart from creating agricultural awareness to the populace, the event has helped many aspiring farmers to make good decision regarding which aspect of farming to go into, whether it is crop farming, fish farming, bee farming, poultry farming, etc.

He said he learnt about other products which he hitherto did not know, explaining that they intend to pass the knowledge garnered to others.

Another exhibitor, North Central Sales Representative of KickStart Company, Jerry Dalung, said it is not only the farmers that benefited from the programme, but end users of agricultural products, producers, marketers as well.

Dalung, who exhibited manual irrigation pumping machine, said the machine is important for small holder farmers as it is manually driven and does not need fuel to be powered, and so it can assist the farmers to get much yield from their farming.