The International Action Network on Small Arms, Safer World and Oxfam International put it in perspective when they reported that armed conflict cost Africa $18… 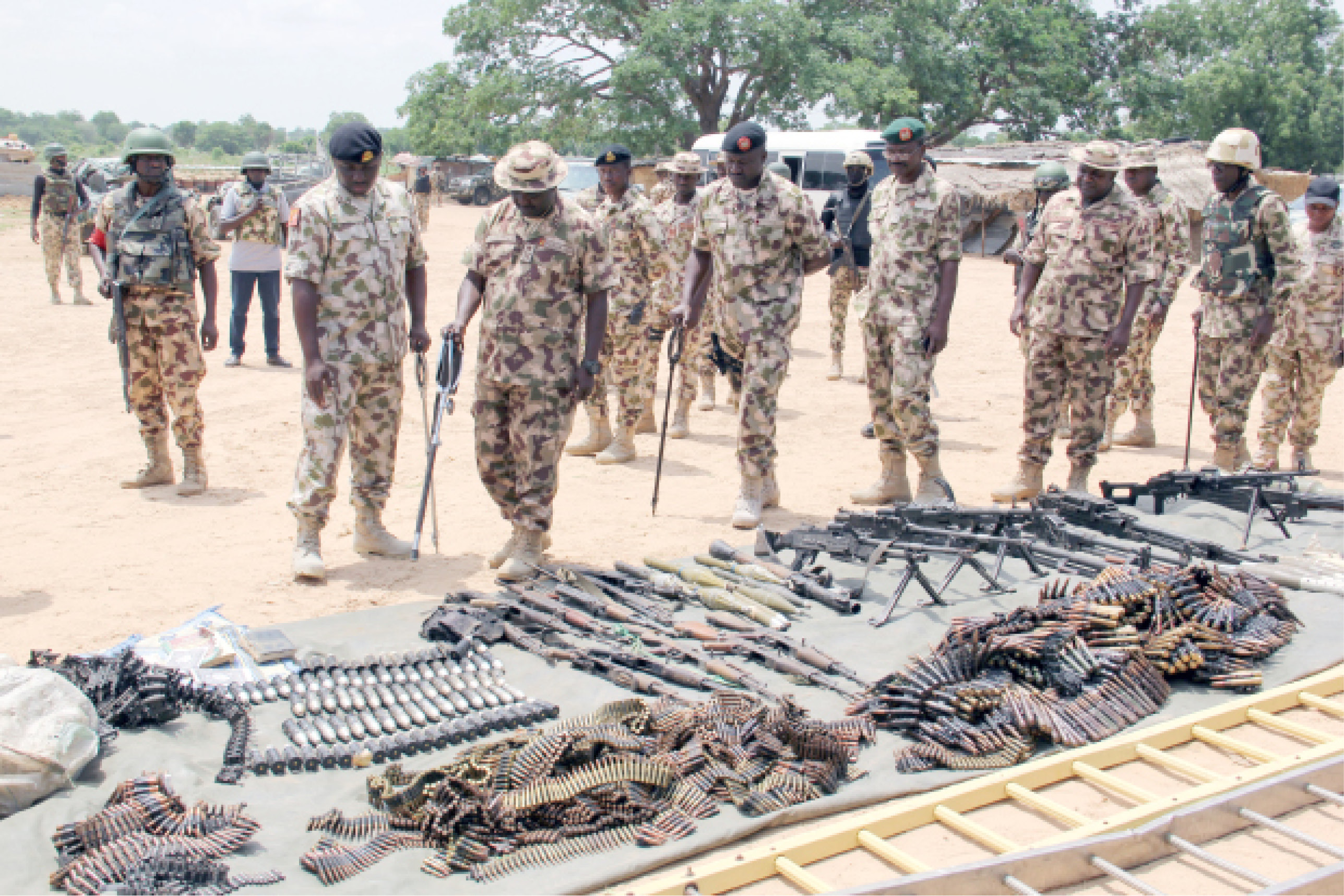 FILE PHOTO: Military commanders inspect arms and ammunition recovered from Boko Haram members on display at the headquarters of the 120th Battalion in Goniri, Yobe State in 2019.

The International Action Network on Small Arms, Safer World and Oxfam International put it in perspective when they reported that armed conflict cost Africa $18 billion each year and about US$300 billion between 1990 and 2005. During this period, 23 African nations experienced war.

The Global Terrorism Index 2020 report ranked Nigeria as the third most terrorised country in the world. The indices have worsened in 2021 with some 80,000 Nigerians estimated to have died in recent months and close to three million Internally Displaced Persons (IDPs) spread nationwide.

Moreover, at the 21st Session of the Meeting of Heads of State and Government of ECOWAS on  October 30, 1998. The ECOWAS member states, including Nigeria, adopted a ‘Moratorium on the Importation, Exportation, and Manufacture of Small Arms and Light Weapons in the West African region. The Moratorium is an unprecedented initiative, the first to be adopted as a significant step in directly addressing the problem of illicit small arms proliferation in the sub-region.

Again, if we recall that in 2019 the United Nations Regional Centre for Peace and Disarmament in Africa (UNREC) and the Presidential Committee on Small Arms and Light Weapons (PRESCOM), conference through the National Consultation on Physical Security and Stockpile Management (PSSM) organised in Abuja revealed that Nigeria hosts 350 million or 70 per cent of the 500 million illegal arms in West Africa. “In Nigeria, this has become a serious security challenge. There is general insecurity as most parts of the country experience high level crimes perpetrated using illicit arms. The UN estimated that a high percentage of illegal arms that is in circulation in West Africa are in Nigeria.

Collaborating the above, former Head of State, General Abdulsalami Abubarkar (rtd), spoke the obvious recently in Abuja, as he raised the alarm on six million-plus of assorted weapons in the hands of jobless, hungry and angry civilians. Unofficial estimates suggest that the toll could be more and in excess of 30 million guns and light arms nationwide.

This came as an indication that the Nigerian state is alive to its responsibility to tackle the free flow of firearms that could ultimately set the country on fire. According to Head, Strategic Communication, Office of the National Security Adviser, Z M Usman, the establishment of the Centre was part of the ongoing restructuring of Nigeria’s security architecture to address emerging threats and strengthen the regional mechanism for the control, prevention and regulation of SALW. Furthermore, the statement points out that the impact of the proliferation of SALW across national borders in Africa and the Sahel region has resulted in terrorism, human trafficking, organised crime, and insurrections in West Africa and Nigeria.

“Therefore, as one of the measures in tackling this threat, the new Centre will be fulfilling the requirements of the ECOWAS Moratorium on Import, Export, and Manufacture of Light Weapons as well as the UN Plan of Action to prevent, combat and eradicate the illicit trade in SALW. The NCCSALW will serve as the National Focal Point on SALW in Nigeria and lead a multi-stakeholder process involving government Ministries, Departments, Agencies and the Civil Society in implementing all national, UN and ECOWAS Plans of Action on the control of SALW.

“The Centre will maintain international cooperation and also operate zonal offices in the six geopolitical zones to ensure quick response and effective mobilisation of resources”.

This move will surely address the current security challenges, caused by many years of underfunding, mismanagement, negligence and lack of political will to tackle the control of SALW headlong.

The president and his team must be commended for seeing the wisdom in taking charge of the proliferation of small arms and ammunition, which is driving the increasing rate of violence in Nigeria.

Clearly, a country in which everyone strives to have a gun in anticipation of threats cannot be at peace.

For, National Centre for the Control of Small Arms and Light Weapons (NCCSALW) to be effective, the president needs to send a bill to the National Assembly so as to make NCCSALW more durable and sustain beyond just being a centre. Already there is a bill sponsored by the Senate Leader, Yahaya Abdullahi on the Nigerian National Commission Against the Proliferation of Small Arms and Light Weapons bill, which has scaled second reading on the floor of the Senate. It is hoped that the presidency can take advantage of this through an amendment to accommodate NCCSALW objectives and vision.

Adefolarin A. Olamilekan is a Political Economist & Development Researcher