We won’t allow Wikki Tourists to spoil our party – Tyavkase 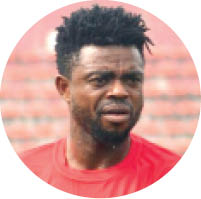 Nigeria Professional Football League (NPFL) legend, David Tyavkase, has expressed confidence that Lobi Stars are going to win the last home match against Wikki Tourists to keep their place in the topflight.

With 46 points from 36 matches, Lobi Stars are 14th on the 20-team league table and victory against visiting Tourists on Sunday will save them from relegation, even if they lose the last match at Abia Warriors.

Speaking ahead of the must-win match, the former back-to-back CAF Champions League winner with Enyimba said Lobi Stars won’t settle for anything less than victory against Wikki Tourists.

Tyavkase reiterated that Lobi Stars will approach the match against Wikki Tourists like a Cup final.

“The match against Wikki Tourists is our last home match of the season and it is a must-win contest. We all know what is at stake. Victory will brighten our chance of remaining in the NPFL even if we don’t win our last match against Abia Warriors.

“So, there is so much to play for and expectations are high. But we are not going to buckle under pressure because we know what is at stake.

“We won’t allow Wikki Tourists to come and spoil our party. The match will be tough but in the end, we would have cause to celebrate,” said Tyavkase.

The former US Bitam of Gabon midfielder also saluted the fighting spirit of his younger teammates in the battle against relegation.