A cross-section of the Muslim faithful in Abuja, the Federal Capital Territory (FCT) have lamented that they now have to go far to purchase animals… 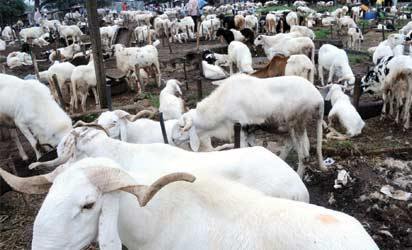 A cross-section of the Muslim faithful in Abuja, the Federal Capital Territory (FCT) have lamented that they now have to go far to purchase animals for the celebration of the forthcoming Eid el-Kabir.

The Federal Capital Territory Administration (FCTA) through the Ministerial Taskforce on City Sanitation had a week earlier stopped the sale of livestock by the roadside.

However, those who spoke to City News said the decision to ban the makeshift markets has forced them into traveling to far places like Deidei livestock market to purchase animals for sacrifice.

The Chairman of the taskforce, Mr. Ikharo Attah, said the FCT Minister, Malam Muhammad Bello, rejected the proposal of the ram dealers to create such markets so as to avoid abuse of the city’s aesthetic make-up, which gulps energy and resources to maintain.

The designated markets are Deidei, Kugbo and all the abattoirs in the city.

A resident of Kubwa, Malam Tahir Ahmad, said the situation took much of his time before he found his way to the market and later struggled for space to park his vehicle.

That, he said, was entirely different from the past, when he had the choice of looking for a ram from different locations within Kubwa town where he lives, or Dutsen-Alhaji, a neighbouring town.

Seasonal livestock traders, who engage in the trade only during festivities, also decried that they did not own spaces within the approved markets and that has affected their business.

It was learnt that such traders, usually operate in open spaces and streets around some Abuja satellite towns.

A ram trader, Mahmuda Ado, who supplies rams to Kubwa from his home state of Kano, usually a week ahead of the festivity, said he was forced to stay away from the space where he operated for years, along the Kubwa -Zuba Expressway.

Ado, who is now squatting in the Deidei livestock market, said right from the gate’s entry, he was forced to pay charges which he said ran into thousands of naira for the single vehicle that he brought his rams in.

He also said he had to pay the owner of the space a token, in addition to what his customers would be forced to pay as tax for each ram they bought.

“All these charges would translate into the cost of my ram, but the most annoying part of the issue is that my customers with whom I established years of patronage, I have now lost them because we don’t have phone contacts.

But traders who operate within the market have expressed their delight over the ban on roadside livestock markets, adding that the development would add value to the price of their livestock.

The Sarkin Zango of Deidei market, Alhaji Muhammadu Kusada, said for years the “Outside traders” had ruined the ram business, and also became a stumbling block who denied the livestock markets its customers.

“But due to the ban, we are witnessing new faces into the market this year. At present, I and other associates have received a demand of 1000 rams supply from a single philanthropist, with another company that needs about 900 rams,” Kusada said.

Also speaking, the chairman of the rams and goats merchants in the market, Alhaji Abubakar Mande, said the authorities have ordered them to accommodate all livestock traders in the market, which he said they have since complied with.