We are in Nigeria to grow basketball, says Gallo Fall

The president of Basketball Africa League (BAL), Amadou Gallo Fall, has said his organisation is in Nigeria to help grow the game of basketball. This… 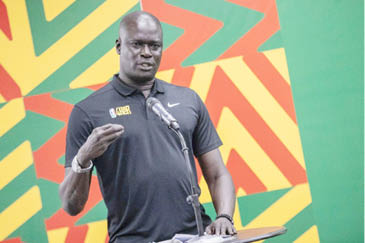 The president of Basketball Africa League (BAL), Amadou Gallo Fall, has said his organisation is in Nigeria to help grow the game of basketball.

This year’s edition of the Basketball Africa League (BAL) is billed to dunk off in December.

Amadou who stated this during the match day one of the ongoing 2022 Nigeria Professional Basketball League in Lagos stressed that Nigeria being the most populous country in Africa was missed in the last edition of the competition.

“As the most populous nation in Africa, Nigeria was missed in the last edition of the competition. You know, we have a long history with the athletes here in basketball.

“I am glad that we are back here and glad to see the country move in the right direction in terms of having a unified front, ultimately that is what we want. We all have the same objectives of growing the game of basketball and bringing together all people who can contribute,” he said.

In the opening match at the Indoor sports Hall of the National stadium in Lagos, Kwara Falcons edged Benue Braves 65-58 points to carry the day.

Gombe Bulls took the bull by horn coming from a slow start in the first quarter to outsmart their opponents Lagos Islanders 66- 55 points at the end of the fourth quarter.

It was a battle for survival in the third match between Rivers Hoopers against Nigeria Custom with the former winning with 62-60 points.

The final match of the day was a keenly contested battle which was won by giants, Kano Pillars 62-60 against Police Baton.

Winner of the ongoing Super –eight will represent Nigeria in this year’s Basketball Africa League.