For Margaret Dim, sourcing water for domestic use at the Ortese Internally Displaced Persons (IDPs) camp sheltering her family of seven appeared to be more… 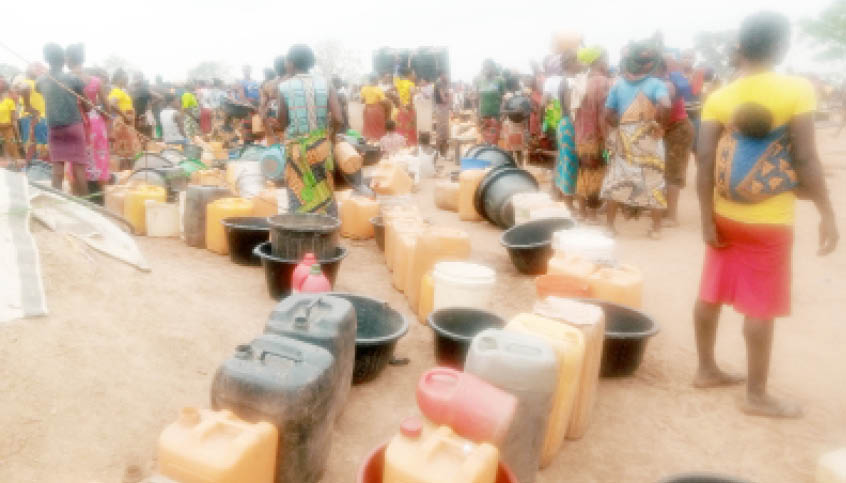 Long queue for water at the Ortese IDPs camp

For Margaret Dim, sourcing water for domestic use at the Ortese Internally Displaced Persons (IDPs) camp sheltering her family of seven appeared to be more difficult than digging for gold.

Dim, a widow who is struggling hard to survive with her seven children told our correspondent that sometimes members of her household including herself hardly bathe once in two days because they try to conserve the scarce water for cooking purposes.

“Water is the most challenging need for my family in this camp. You can only imagine how in this hot season we sleep without bathing for two or more days.

“We go everywhere around to find water but without any success. Sometimes, we dig the ground and yet can’t find enough to cook, talk more of washing our clothes or bathing. But, they (referring to Doctors Without Borders) now bring water for us every day yet it isn’t sufficient because of the crowd here,” the woman said as she turned her attention back to her grinding stone.

She was grinding a handful of ‘egusi’ (melon) and had a small pot on three-stone fitted fire wood fire obviously in readiness to make lunch for her household, then according to her, they will wait for provision of another meal the next day after receiving proceeds from firewood sold to villagers in the host community.

Dim explained that life was tough in the camp and the suffering becoming unbearable every other day with no hope of survival except for the firewood she sells to buy food.

Similarly, Mercy Verlumum, 28, with a two-month-old baby strapped to her back, struggles to manage a pack of sachet water to cook food for her own household as the water containers beside her ramshackle tent were all empty.

Verlumum has six children and a husband who also lived with them in the camp. The infant strapped to her back was birthed in same camp.

While the other children were attending under-the-tree school arranged at the camp during our correspondent’s visit, Verlumum was doing her best to prepare a meal before their return with the only water at her disposal.

“We don’t bathe some days because of water. Though they bring water here every day, however, I could hardly fetch most of the times. The queue is very long and water bodies around have dried up, mainly due to the large population here.

“Sometimes, I fear an outbreak of water borne disease. You can see that children are many in this camp and not having enough water is not good,” she posited.

Other women at the camp like Verlumum and Dim have endless tales of woes to share about lack of water despite their deplorable living condition, coupled with hunger.

Medical personnel were seen battling an outbreak of measles at the camp just as many are down with various ailments.

On his part, the Camp Chairman, Hur Ayabo, noted that the Doctors Without Borders has been very helpful to them especially in providing water because there is no water at the camp.

“They have made several efforts to dig borehole but their efforts to dig a well proved abortive. They bring truck water from Makurdi to here (camp). Secondly, in terms of medicine, they visit this camp Mondays, Wednesdays and Fridays and if there’s any need for emergency, they still attend to us.

“ By this time last year, we lost about four children to Cholera outbreak but since the intervention of Doctors Without Borders, that has not occurred again. Today, we have measles but we have not recorded any death.

“I want the government to know that their people are here and they are suffering. No matter the little they have, they should help us so that we can survive,” Ayabo pleaded.

Meanwhile, most of the inhabitants of the Ortese camp located along Lafia Road in Guma Local Government Area of the state, approximately 35km north of Makurdi town, were chased away from their Mbagwen community by armed herders militia almost a year ago.

The local primary school administrators in Ortese decided to open up the school doors, to allow them (IDPs) use the school buildings for shelter.

But the classrooms were inadequate for the IDPs as the camps continued to swell occasioned by more attacks on villagers in the interiors. As a result, the majority pitched tents made of sticks and mosquitoe nets so they could lay their heads from the scorching heat or changing weather as the case maybe.

The camp, still classified unofficial, remains one of the several IDPs shelters in the state. The Ortese camp had gained little or no state government attention except for Medicines Sans Frontieres- Doctors Without Borders (MSF) currently working there to reduce the suffering of the people.

Speaking with some journalists in Makurdi over the development, the MSF Project Coordinator in Benue State, Mitch Rhyner, appealed to the Benue State government to provide water for the over 11,000 IDPs camping at the Ortese camp.

Rhyner explained that the organization had for several months now been supplying eight tankers of water to the IDPs on daily basis.

He said the organisation had tried 13 times to carry out ecological survey of the area to see whether boreholes can be built to address the water needs of the displaced people to no avail.

He further disclosed that it was after all the ecological explorations failed to yield any positive result that his organisation took the decision to transport water tankers from Makurdi to the camp at Ortese at the rate of N3,000 per tanker daily.

“We feel that we are already doing much. We are paying the drivers, paying for the trucks and the fuel. We will want the state to provide the water. So, we have put that request in an official letter and we are waiting for response. We haven’t heard from the governor or from the ministry of water resources yet,” he said.

Rhyner is also worried about the continued stay of the IDPs in a school environment as he called for their speedy evacuation from the premises to enable normal classes resume in the school.

“One consequence of people staying in school is that the school is no longer being used and that is going to be bad for education. One of our goals in our advocacy is to have shuttles being built including shelters so that people can leave the schools and the schools can be used for classes,” he noted.

To this end, he therefore appealed to other donor organisations to join forces in attending to the needs of the displaced persons at the camp.

“As you can see, we are over worked. We provide basically health care three times a week; Mondays, Wednesdays and Fridays. We have those tents and there are no sufficient spaces.

“This place has been here from April and May but we started out intervention in Ortese camp in June, July last year. We intended to stay for three months but because the needs proceed and because others are not providing support, we stayed definitely till this point.

“As you can see, there is no other NGO presence here. We are the only humanitarian organisation here. You might see a SEMA (State Emergency Management Agency) staff here but I’m not sure what he will be doing. So, we are really encouraging others to provide support because it is not acceptable that people are living under these conditions, to be exposed to snakes, to weather. Rainy season is coming and as you can see by the tents, they have no protection from the weather,” Rhyner maintained.

However, the Executive Secretary of State Emergency Management Agency (SEMA), Dr. Emmanuel Shior, in reaction to the health of the IDPs, told journalists in Makurdi that, “Government, through the Ministry of Health, is on top of the situation.

Shior said, “Usually, during hot seasons like this, we experience issues of measles, so the Ministry is collaborating with SEMA, Doctors Without Borders (MSF), UNICEF and the ICRC (International Committee for the Red Cross), who are supporting us in the area of WASH. So, we are addressing the concern.”

Earlier, MSF’s Rhyner worried that SEMA had not been adequately funded to meet the challenges, despite that it has the will and capacity to care for the IDPs even as he stressed the need for the United Nations humanitarian arms as well as other donors to bring succour to the displaced people languishing in the Benue IDPs camps.

“We’re disappointed with humanitarian responses in Benue State. The IDPs are living in deplorable conditions in the camps. While MSF is responding in some areas, we expect other humanitarian actors to respond in other ways.”