We are aware – Ogun govt Residents of Abeokuta, the Ogun State capital, yesterday, lamented that heaps of waste have taken over streets of the… 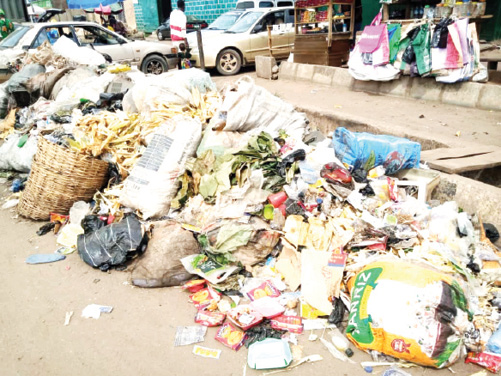 Residents of Abeokuta, the Ogun State capital, yesterday, lamented that heaps of waste have taken over streets of the town.

Our correspondent reports heaps of waste ooze out stench which has made residents, visors and traders uncomfortable.

A trader on Panseke Street, Mrs Adebisi Salami, blamed the development on the failure of the state government to rid the city of refuse.

Mrs Salami said, “Government should not forget that some people keep diapers in some of these things they drop by the road. So, leaving waste on the roads may lead to outbreak of diseases, especially now that the rains are here. Those concerned should do something about it.”

A resident on Lafenwa Street, Oladimeji John, said. “We used to have government trucks that come to evacuate waste dropped at designated places by the roads. But for like a month now we have not seen those trucks. That is why you see refuse on the roads. It keeps increasing daily because nobody is doing anything about it.”

A governorship aspirant in the state, Segun Showunmi, said, “I have lived in the state since 1999 and I have never seen it so dirty. We have never had it so bad.

“I will not accept that an educated and enlightened set of people will be so dirty and live in filth. I ask you my friends to help me rediscover our preeminence. We are the sophisticated people of Yoruba extraction; a people of many firsts.”

Responding, the special adviser on environment to Governor Dapo Abiodun, Ola Oresanya, said, “We are aware of the situation. We just finished a meeting. We have a problem with the community where we are dumping refuse. The community is revolting, and these are people encroaching on the dumps, but we don’t want to use force against them. This is a democratic dispensation. We have to dialogue with them. This is the major problem. There are vehicles with refuse inside that cannot dump. So we are trying to resolve that. We are going to resolve in the next few days and we will clear up. We are aware (there is refuse everywhere in Abeokuta) and we are working seriously on that. We are careful, we don’t want to force things on the people.

“Another issue is that most of the people that pick the refuse on the roads are fasting;. Many of them are not even working now. To get labourers to work for you now, you have to struggle for the few ones available.”