Was a woman behind the wheels of popular meme?

Claim: A post of a combined picture showing a passenger before boarding a bus and when it had an accident has been used to portray… 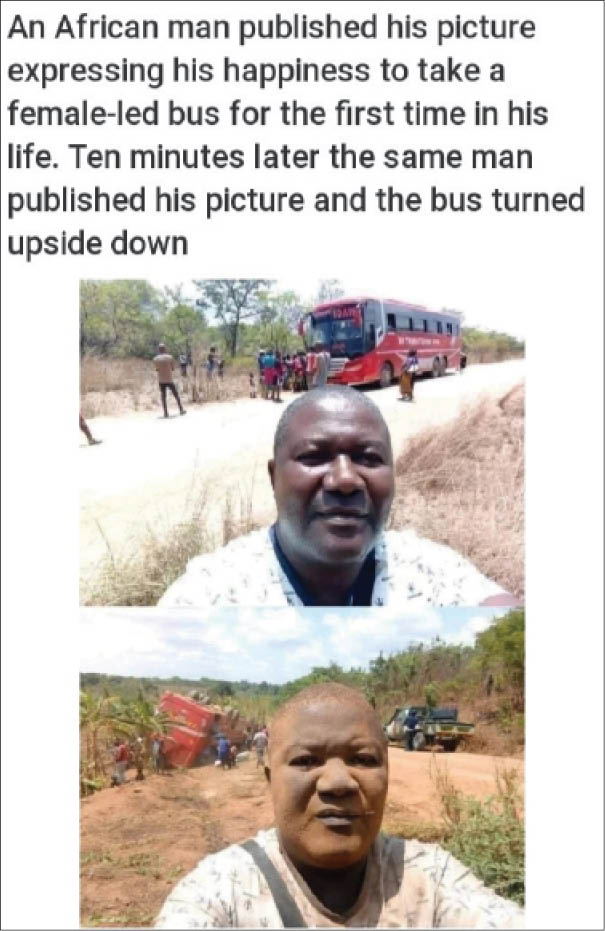 Was a woman behind the wheels of popular meme

Claim: A post of a combined picture showing a passenger before boarding a bus and when it had an accident has been used to portray women as not competent while driving.

Verdict: The claim is false. The text that accompanied the image was distorted.

The picture, which showed the passenger looking dapper with a happy face while backing a red bus and another which he was covered in dirt while the bus was in a wrong position, tyres up, and surrounded by passengers and police officers, stated, “An African man published his picture expressing his happiness to take a female-led bus for the first time in his life. Ten minutes later, the same man published his picture and the bus turned upside down.”

The incident, which happened in Mozambique in 2018, has become a popular meme on the cyberspace and being used in several contexts for amusement.

But with most netizens not knowing the origin of the incident, the claim that a woman was behind the wheels has also gone viral.

What led to the accident?

According to a report by the Daily Mail, the 65-passetravelin was ferrying passengers from Quelimane to Beira in the central regions of Mozambique.

Local reports also stated that the accident led to the death of three persons while more 37 persons were injured.

Daily Mail stated that the accident was blamed on over-speeding by the bus driver, who was identified as Amisse Mussa.

“According to district administrator, Manuel Jamaica, the accident may have been caused by speeding. However, the driver, Amisse Mussa, 48, blamed mechanical failure, which he said made it impossible for him to control the vehicle on the bridge.

“Some passengers are also thought to have reported the driver for driving too fast and claim that he ignored repeated requests to slow down,” it stated.

Is Amisse Mussa male or female?

The report gave the name of the driver as Amisse Mussa, and according to a report by Forebear, Amisse occurs more in Mozambique more than any other country or territory. It described the name as its 20,468th most widely held surname globally, borne by approximately 1 in 272,829 people.

Namecheck described Amisse as being used as family name or surname in Mozambique languages.

“It is a quite popular last name mostly concentrated in Mozambique, which signifies that it originated from the country,” it stated.

On the other hand, the name Mussa is given to boys, which is the Muslim version of Moses.

Also, a website, cute-name-check, noted that Mussa is among “a popular boy’s name in Mozambique.”

From the foregoing, it is safe to state that the driver is a male; it also indicates that involvement in accident is not related to a particular gender.