Nigeria is a football-loving nation. A national league thrived in this country long before corruption killed and buried it. From its ashes rose the popularity… 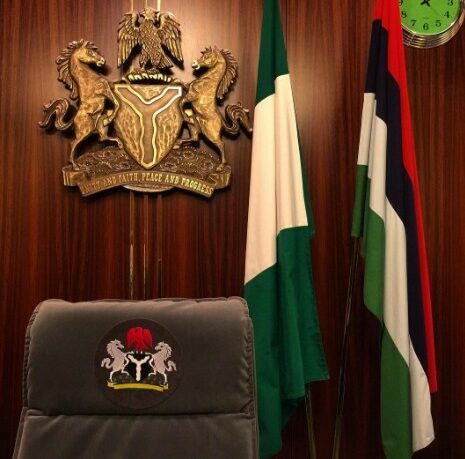 Nigeria is a football-loving nation. A national league thrived in this country long before corruption killed and buried it. From its ashes rose the popularity of the international league. Every Nigerian you know, including our better halves, supports a foreign team as long as it’s the team of their spouses they are likely to be fine.

Who says that even in sports, neo-colonialism does not work in mysterious ways?

Younger Nigerians daily threaten each other as proof of their loyalty to teams that have no clue where Nigeria is on the map of Africa. The way the creator made the Nigerian is such that he loves foreign things over his own. Our retired footballers coach foreign teams to excellence, but at home, we must hire a foreign coach to boost our chances at the game. God help that coach who leads us to failure, we do not waste time to sack them. How one wishes we apply the same to politicians and militicians. If we did, both Olusegun Obasanjo and Muhammadu Buhari would never have returned as civilian presidents.

Football administrators are yet to learn from how Nigerians play politics. Foolish European football administrators spend their scarce resources searching for younger Ronaldos. They spend money, hiring talent scouts to up their game. Nigerians have perfected the art of picking the best from the gallery. It beats rational imagination that Goodluck Jonathan, the man from whom Buhari snatched the presidency seven years ago, is the hottest potato on the 2023 political league today.

Seven years ago, some Nigerians would have given Jonathan the Rawlings treatment. They claimed they were tired of walking around in fear as bombs were going off even in holy places. Boko Haram, the only insurgency group troubling the nation that Jonathan failed to tackle, controlled several local government areas of northeastern Nigeria.

Buhari promised to stop that nonsense. We had to believe him. While he had no certificate to parade, he made it to the top league of the army, was once a head of state and has a certificate in strategy from an Ivy-League American military institution. We told those who hated to listen that we would happily elect such a man on the strength of his NEPA bill than retain a PhD holder whose sobriquet was Mr Clueless.

Nobody should ask how far we have fared since 2015 except that Zulum, a professor and governor of Borno claims to be in charge of his entire state. He has closed all displaced camps but in reality, we would never know, because except you have the nerves to endure the turbulence of flying over Maiduguri, any normal means of transportation in Nigeria today is a death or kidnap sentence. From slaughtering farmers in their farmsteads, marauders have graduated to slaughtering entire towns and villages without qualms.

And unlike in the past when Buhari is not aware that Kaduna, Niger, Plateau, Nasarawa and Benue – Abuja’s surrounding states have been overtaken by bandits; our outgoing president has informed us that the ‘final victory against terrorism’ is in sight. Apparently, presidential binoculars have wide-angle lenses, so we can’t beat that assurance any more than we would beat the president’s earlier claim of technical defeat of Boko Haram.

A cursory look at the league struggling to take over from Buhari shows that Nigeria wants to play in the premier league with players handpicked from the gallery. On that team are two vice presidents – one retired and one still serving. Atiku Abubakar, now a veteran of the race, was Obasanjo’s deputy for eight years. His enemies say that he has nothing new to offer. Not with the allegations of corruption levelled against him by his former principal yet to be redacted from his principal’s memoirs.

Osinbajo is a different kettle of fish. Dubbed the VP Academics by his enemies because of his academic way of addressing issues, this RCCG pastor has spent more than four of the nine lives of a cat escaping accidents. However, apart from presiding over school feeding and Tradermoni two unaccounted for projects, Osinbajo has functioned as an archetypal spare tire – useful only when there is a puncture. Having deputised a man fast beating his forebears as a lameduck president, Osinbajo’s promise to start from where his principal stops has been described as a threat by many. Nigerians don’t like people who threaten them.

We have two ex-Senate presidents. Anyim Pius Anyim, the man the late Chuba Okadigbo described as a mass of protoplasm is in the race with Olubukola Saraki. One of the best things Nigerians would remember Anyim for is how he forged a law after it had been passed by the National Assembly to make Obasanjo happy. Elect a man like that, and he could change the place of the rising of the sun without scruples. Saraki is no better. He is from the Saraki Dynasty, a house so disdained by the people of Kwara that they launched a movement – O to ge – Enough is Enough – to curtail its excesses. As they say in the holy books, the acts of Anyim and Saraki, are they not written in the books of the Senate Presidents?

Many of Buhari’s ministers have rushed out to obtain forms showing that their principal has erased the bar of the presidency and opened it for all comers. Three ministers who have so far declared their interest in running are doing so unconscionably showing that there are no consequences for failure in the political spectrum.  Chris Ngige, the maverick ex-governor turned labour minister is a failure in negotiation. Under him, Nigeria’s tertiary institutions have remained locked because of his incapacity to negotiate and honour agreements. How does he expect to run a complex state like Nigeria?

Rotimi Amaechi’s case is worse. This professional politician made his declaration barely a week after a deadly attack on trains running under his charge was attacked by terrorists. Several Nigerians died and over 100 passengers are in the hands of terrorists, yet Amaechi jumped into the presidential race with a victory lap before the umpire had blown the whistle. If the dead and the missing mean nothing to him, how can he be trusted with the leadership of the living? Emeka Nwajiuba is equally in the race. Someone please tell me, who is he?

The worst of Nigeria’s governors are in the race. Yahaya Bello, the youngest and the most clueless and ruthless of all governors wants to run Nigeria. All he has done so far is running Kogi state aground. Aminu Tambuwal has not fared better in Sokoto. Bala Mohammed’s footprints are yet to be seen on the rocks of Bauchi, but he dreams of stamping his marks on Nigeria.

Two serious candidates are running under the radar so far. Peter Obi who was Atiku’s running mate in the last race is standing on his own. If Nigeria needs a man with prudence in governance, Obi may be the man. In the same league is Kingsley Moghalu. If Nigeria has decided to play in the League of Nations, it must divest itself of its ethno-religious sentiments, stomach infrastructure and remember that only a good captain can lead his team to the top of the league and keep them there.