Driving through Obafemi Awolowo Way, Utako, up to Jabi could be unpleasant, especially after a heavy downpour. The road is usually flooded by filth from… 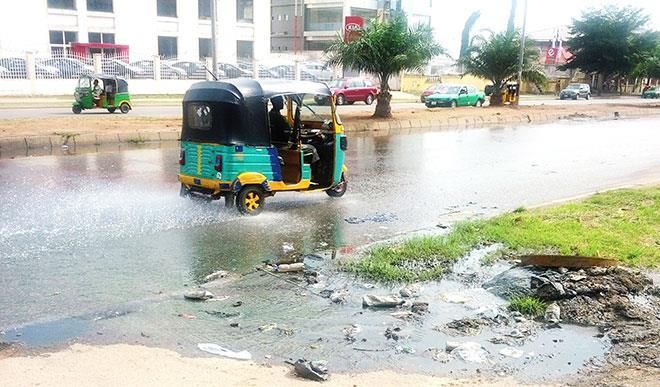 Driving through Obafemi Awolowo Way, Utako, up to Jabi could be unpleasant, especially after a heavy downpour. The road is usually flooded by filth from bleeding manholes, making the road muggy while the atmosphere is permeated by stomach-churning odour.
Aso Chronicle has identified three manholes that looked unattended for some time. Human waste covered the metal covers of the holes while putrefying and nauseating smell pervade the areas.
Few metres from Arab Junction, the sewage flows as far as about 1000 metres from the manhole, making pedestrians and other road users cover their noses with handkerchiefs. In some instances, after a heavy downpour, the situation is made worse as the rain washes the filth to a far distance and whenever vehicles are speeding, they splash the dirt on pedestrians.
The situation, residents said, raises questions about the efficiency of the Abuja Environmental Protection Board (AEPB).
Some of the residents said the board should channel same energy it uses in chasing street hawkers and beggars to ridding the city of filth.
Daniel Lewis, a resident, said sewage has been gushing out of one of the manholes near BEF Plaza for more than two months now,
“The environmental board that is supposed to work on it, has not been paying attention to it,” he alleged.
Lewis, who works at one of the shopping plazas near the bleeding manhole, said the odour is perceived from his office, especially when it rains.
He said the situation which had been left unattended to poses a health risk to the residents.
Prosper Peter Johnson, another resident, wonders what the board has been doing for the several months that the manholes have continued to bleed. He said the situation is worst around Arab Junction because the waste is not coming from the manhole only but also from the abandoned Utako General Hospital.
He said the abandoned hospital complex is soaked in a pool of waste water channelled into the building from Utako village. He said shop owners, pedestrians, and residents live with the offensive smell which he said tells on their health.
“The environmental board is seeing the problem but behaving as if it is not aware of the issue.  They are supposed to find out where the waste is coming from and repair it, but they’ve refused to do it,” he said.
Ayo Amuda, another resident, said the leakages ought to have been repaired a long time ago should every system be working well in the country. He said the smell is dangerous to the health of residents, wondering when AEPB will wake up to its responsibilities.
A resident who spoke on condition of anonymity said people can’t breathe well and are always careful when vehicles are passing so that the waste would not be splashed on them.
“The people responsible for it are the environmental board, but they have not been paying attention to it, they are only interested in bills. They don’t take care of the environment, you only see them when they want to collect bill,” the resident said.
Praise Okon said she was always indoors with all doors and windows shut. Her method, however, could not stop the stench from reaching her office.
“Though I close all the windows and doors, the odour still finds its way inside the shop,” she said.
She appealed to the government to quickly intervene in the case.
Azeez Olawale, a taxi driver, said he always winds up and drives very slow so that the sewage would not splash on other road users.
But Ifeyinwa Enija is yet to find a way around the situation as her business suffers from the odour. She said most of her customers now patronise other people as few can withstand the odour.
The Head Media and Outreach Programme of the Abuja Environmental Protection Board (AEPB) Joe Ukairo said issues of bleeding manholes are not strange rather “it is part of the system and it shows that human beings are using the system.”
He explained that the manholes bled because of silt which has blocked the waste water channels thereby preventing the sewage from flowing properly.
He said residents are partly responsible as in most cases, they dispose clothing materials and hard materials along with their waste waters.
He said the board is aware of the incessant cases of bleeding manholes and it is not sleeping on duty.
Ukairo charged the residents to be calm, saying the situation would not have been compounded if the sewage lines have been de-silted. He listed delay in budget approval among challenges limiting the efforts of the board in remedying the environmental nuisance.
“From time to time we service the central sewer line but for some time now, it has not been de-silted, you know this present administration is working on that and the budget has been passed just recently,” he said.
He said though the process for the de-silting is on and would be done very soon, he assured that the board undertakes maintenance activities contrary to what residents have said.
He however said the bleeding manholes should not be seen as a sign of “a dead city or inefficiency on the part of the board as it is part of the system though some may have lasted longer than normal.”
He said the issue might look trivial to an average resident but there is more to it than meets the eyes.
“Some of them are as deep as the height of a duplex and they are above the threshold where you can raise a cash advance of N200, 000, the bench mark any director should approve in this dispensation,” he said.
“While we are waiting for the lasting situation, the liquid waste department goes there to intervene, some of the situations are so critical that after intervention, it takes between five and 10 hours for the sewage to come up again,” he said.
While residents await the intervention of the AEPB, they have devised different survival techniques especially among those that work in the area.