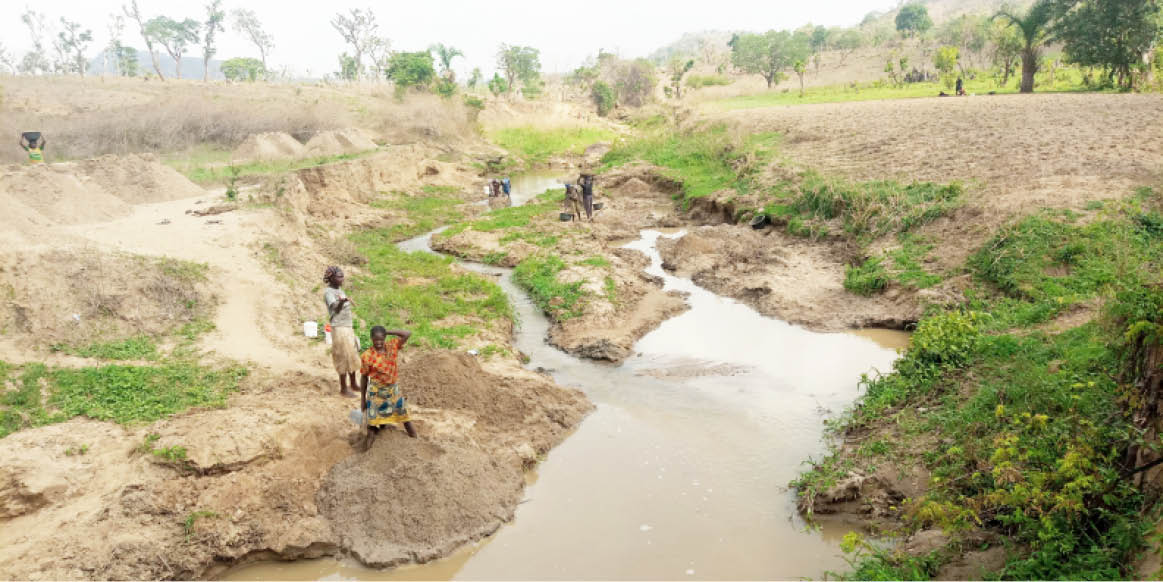 Some women scooping sand for suppliers to buy, around one of the streams that leads into the dam.

Usuma Dam, the source of public water supply in the Federal Capital Territory (FCT), is under threat of contamination following activities of land encroachers around the immediate and extending vicinities of the facility.

Constructed about three decades ago, the dam is home to four water treatment plants that draw their water from it.

Daily Trust learnt that people suspected to be indigenes and land grabbers have found their way into the “restricted” premises of the dam where they are cultivating crops.

Concerned by the impact of these activities and many others on the ecosystem in and around the dam, Jigna Eco-Ranch Limited wrote to the FCT Minister, Malam Muhammad Musa Bello, on April 26, 2021, detailing the human activities taking place in the dam’s environment and the risky effects of the activities on the dam and residents and its desire to partner with the FCTA in conserving the area.

The letter, signed by the chairman of the company, Ad’Obe Obe, indicated that the farming activities, if not stopped, could lead to erosion and denudation of the vegetation cover, as well as contamination of the water by chemicals from herbicides and fertilisers.

Obe also expressed worry over tree felling, which he stressed, could cause desertification, and decried that the unhindered access people had into the area posed a security threat.

Obe observed that, “Usuma Dam vicinity, which has been termed as a ‘restricted area’ for security, and also environmental best practices protection, is now being accessed by loggers, sand merchants, illegal alluvial miners and cattle grazers. There was also an attempt to start recreational park services just behind the dam’s shores, but was demolished in 2019 following a petition by a concerned group.”

The dam which draws water from about six rivers and streams at a point could not meet the water demand of the rapidly growing Abuja population, a situation that led to the construction of another dam at Gurara in Kaduna State. The two dams are linked by a pipe.

Daily Trust further gathered that ahead of the Usuma Dam project, all the communities around the vicinity and catchment areas of the facility around Ushafa and Mpape were compensated for their homes and farms and were relocated and resettled at Peyi community near Bwari town.

However, findings showed that some of the people, mostly original inhabitants, are gradually returning to their previous lands for farming thereby making the land vulnerable to erosion.

Also, about 90 per cent of the dam’s catchment area around Ushafa axis along the Dutse/Bwari Road has been developed by individuals for residential purposes.

There is also a recreational park, water-related engineering firms, among others, that have taken over large spaces of land, with many of them still in the process of clearing to start development.

The development is said to be in contrast to the masterplan of the dam which indicates that the plain land vicinity should remain in its original vegetation state for soil protection from erosion.

It was predicted that in the event of the dam breaking, the survival of people living around the vicinity from a subsequent flood is not guaranteed, as flooding goes to as far as Kubwa whenever there is mere water spillover from the dam.

Effort to get comment from the Federal Capital Territory (FCT) Water Board, the agency responsible for the maintenance of the dam, ended in a fiasco.

Editor assaulted at water board

When our City News Editor went to the board on May 7, 2021, to see its spokesman, Alhaji Umar Akko, he was said to be on leave, and the acting General Manager (GM), Dame Joy Okoro, was not in the office.

However, Alhaji Akko who later spoke with the editor on phone, directed him to the GM. When the editor eventually met with the GM in her office on Wednesday, she insisted to see the written story before she would respond to it, but the editor refused on ethical grounds. He then said he could only send her the letter from which the story emanated from, which he did through WhatsApp.

The GM did not take that kindly and asked the editor to go and come back later; that she was not disposed to commenting on the story at that moment; stating that she was busy.

The editor insisted that it would only be fair if she spoke at that moment because it took almost a month to get across to her.

At that point she accused the editor of recording her secretly and demanded that the editor handed over his phone to her.

The editor protested, insisting that he was a professional and would not record one without one’s consent and if she doubted his professionalism and credibility, she should call the spokesman of the FCT Minister, Mr Anthony Ogunleye, and confirm.

Ms Okoro did not do that, instead, she called on her staff to take the editor out of her office and to ensure he did not leave the premises without surrendering his phone.

At that point, over 10 staff members, including two Nigerian Security and Civil Defence Corps (NSCDC) officers, pounced on the editor, assaulted him and broke his mobile phone, accusing him of being a fake journalist.