The American University of Nigeria (AUN), with funding from the United States Agency for International Development (USAID), has flagged off the distribution of supplementary materials… 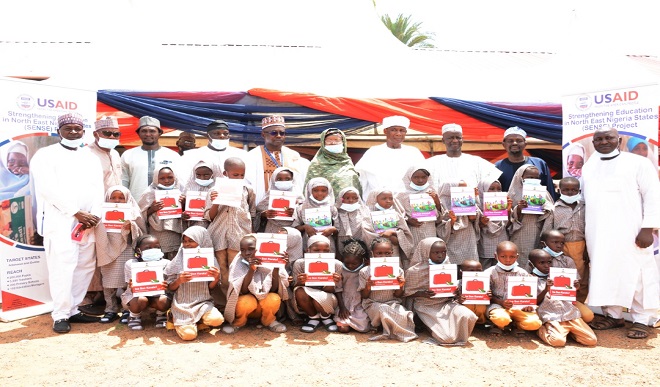 The American University of Nigeria (AUN), with funding from the United States Agency for International Development (USAID), has flagged off the distribution of supplementary materials to over one million Hausa readers in Gombe and Adamawa states.

The exercise commenced on Friday at the Children’s Home Primary School, Malamre in Adamawa State.

Chief of Party, Strengthening Education in North-East Nigeria (SENSE) project, Dr Audu Liman, disclosed that USAID had provided $13m to AUN to support children in Primary one to three in Adamawa and Gombe state so as to improve their reading outcomes.

He noted that each child was given a supplementary copy and 2500 copies each for schools in eleven local government areas of Adamawa state.

Dr Liman explained that AUN had developed 200-300 language speakers of Hausa language in 2016 which are used across Nigeria and in places like Niger Republic, Ghana, and Cote d’Ivoire for the teaching of Hausa language.

He reiterated that the project approach was to develop and strengthen the education system to enable it to deliver access to high-quality education options that respond to the needs of all children without burdening it with additional cost if a parallel system is created.

The Chief of Party said the organisation had supplied one million and two thousand five hundred readers to 253,000 learners across 335 primary schools in Adamawa and Gombe states.

He lauded the Commissioner, Ministry of Education and Human Capital Development, Walbina Jackson’s effort for the realization of these successes and urged her for more partnership.

Responding, Mrs Jackson pledged her full support for more partnership for the development of Adamawa State.