US lawmaker says Trump treated worse than Jesus before crucifixion

A US Republican lawmaker said Wednesday that President Donald Trump, undergoing impeachment proceedings led by Democrats, has been treated worse than Jesus before his crucifixion,… 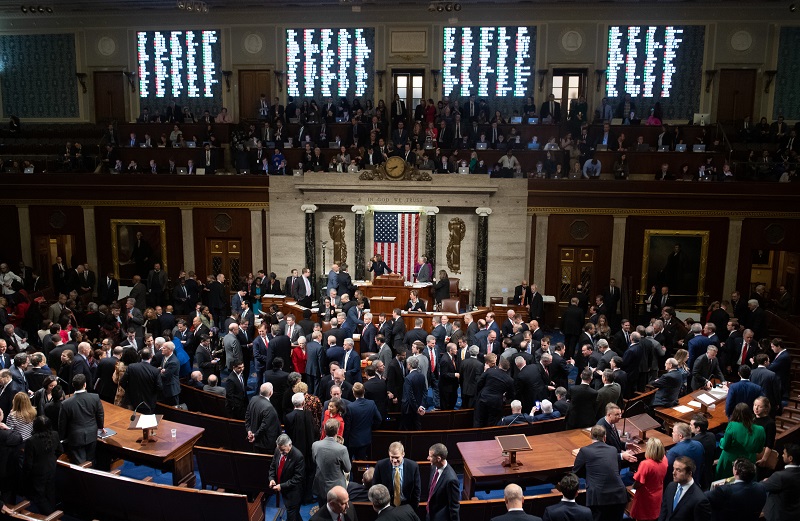 US Speaker of the House Nancy Pelosi presides over Resolution 755, Articles of Impeachment Against President Donald J. Trump as the House votes at the US Capitol in Washington, DC, on December 18, 2019. – The US House of Representatives voted 229-198 on Wednesday to impeach President Donald Trump for obstruction of Congress. The House impeached Trump for abuse of power by a 230-197 vote. The 45th US president is just the third occupant of the White House in US history to be impeached. (Photo by SAUL LOEB / AFP)

A US Republican lawmaker said Wednesday that President Donald Trump, undergoing impeachment proceedings led by Democrats, has been treated worse than Jesus before his crucifixion, causing a stir on social media.

“I want you to keep this in mind: When Jesus was falsely accused of treason, Pontius Pilate gave Jesus the opportunity to face his accusers,” Congressman Barry Loudermilk, who hails from the deeply conservative Bible Belt state of Georgia, told fellow lawmakers.

“During that sham trial, Pontius Pilate afforded more rights to Jesus than the Democrats afforded this president and this process,” Loudermilk said, referring to the Roman governor of Judea who approved the death sentence.

“Trump to Jesus” was soon trending on Twitter, but Loudermilk was hardly the only lawmaker to reference Jesus’ crucifixion during the day’s proceedings.

From the House floor, Republican congressman Fred Keller of Pennsylvania quoted Jesus’ words from the cross — “Father, forgive them, for they know not what they do” — in referencing those voting against the president.

James Martin, a Jesuit priest and US author posted on Twitter that he believed there were some differences in Trump and Jesus’ treatment: “Pilate had Jesus beaten and whipped, thrown into jail overnight, marched through the streets carrying his cross, and then nailed to that cross until he died.”

“Comparing the treatment received by the President to what Jesus suffered is absurd. Also, only one of them is sinless,” he said.

Charlotte Clymer, press secretary for US LGBT civil rights organization Human Rights Campaign, said that the president “might be confused because of Trump’s tendency to turn anything into whine.”

According to the Bible, Jesus’ first miracle was turning water into wine at a wedding.

The bitterly divided House of Representatives voted late Wednesday to impeach Trump for abuse of power and obstruction of Congress.

The matter now heads to trial in the Senate, where Trump’s Republicans hold a 53-47 seat edge, and are expected to exonerate him.