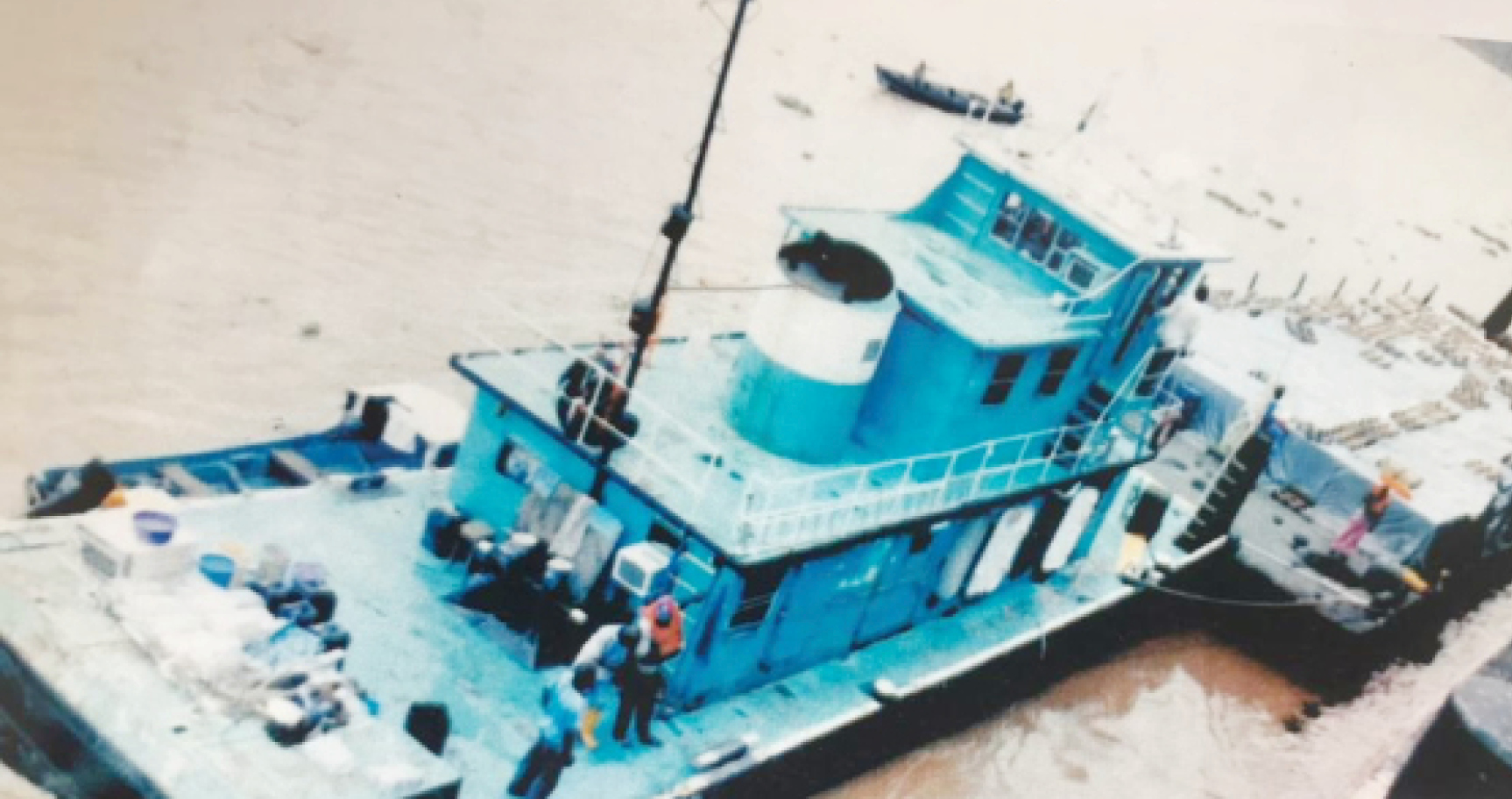 Despite the billions of naira spent by the federal government in both capital and maintenance dredging of the River Niger to make it all-year round navigable and boost economic activities on the waterways, the operations of the inland water transport sector still remains a far cry, Daily Trust on Sunday reports.

River Niger remains one of the most critical natural assets that hold good prospect for economic diversification in Nigeria.

The river and its tributaries are the most reliable channels of transportation and communication in the pre-colonial, during the era, and the post colonial period.

Until the late Umaru Musa Yar’adua emerged the president of the Federal Republic of Nigeria, the move to dredge lower River Niger had remained a recurring project for every administration since independence.

On December 1, 2008, the late president broke the jinx said to be trailing it right from the colonial period as he signed a N34.8 billion contract for the dredging of the lower River Niger from Warri to Baro.

To make this dream come true, the late president inaugurated the project on September 10, 2009 in Lokoja, the capital of Kogi State, with a three-year completion plan.

The contract sum was later reviewed upwards in the Federal Executive Council on November 2, 2011, with an additional approval of N8.5bn, thus putting the entire estimate cost of the  project at N43.3bn. The review was hinged on inflationary spiral.

Mathias Oke, a marine engineer in Lokoja, said an earlier attempt by former President Olusegun  Obasanjo  to dredge the river via the Petroleum Trust Fund (PTF)  did not see the light of the day.

Among other reasons, it was said that the primary aim of dredging the river was to make it navigable so as to enhance economic activities, reduce burden on highways, minimise accidents and create employment.

The National Inland Waterways Authority (NIWA), the regulatory agency of waterways in the country, noted that more than 20 states in Nigeria were interconnected by traversable waterways. According to the NIWA, waterways in the country include 12 major rivers, creeks, lagoons, lakes and intra-coastal waters, amounting to a passable distance of over 10,000km.

Senator Binta Masi Garba, the current chairperson of the Board of Directors of the NIWA, said that out of over 10,000km of waterways, only 30 per cent, about 3,800km, were navigable all-year-round.

“The  mandate to make the entire 10,000km all-year-round navigable rests with the Authority, with a view to providing alternative mode of transportation for the evacuation of goods and passengers for Nigerians,” she said.

Former President Goodluck Jonathan maintained the momentum set by his predecessor, which saw to the successful completion of the project.

In 2011, he was reported to have released fund to commence the project from Warri to Baro. In August 2014, the former president declared officially that his administration had completed the dredging of 527km lower  River Niger from Warri to Baro  at the  maiden edition of the International Conference and Exhibition organised by the NIWA in Lagos

Represented by the then minister of transportation, Idris Umar, Jonathan called on investors to make use of the dredged waterways  to strengthen their businesses.

The NIWA also celebrated shortly after the completion of the dredging project in August 2011 when  NINON, a marine transport company, moved 300 tonnes of tiles, equivalent to 20 trailer loads from Lokoja through the dredged lower River Niger channel to Onitsha in Anambra State.

Also, the immediate past minister of transportation, Rotimi Amaechi, told senators that the dredging of lower River Niger had been completed. He said this when he appeared before the Senate Committee on Marine Transport to defend the ministry’s budget proposal.

However, many years after the official declarations and celebration of a dredged River Niger, nothing seems to have changed as no badge or cargo has been seen hauling goods via the river. Investors are shying away from using that route.

Daily Trust on Sunday reports that the seeming lull of economic activities despite the said dredging has been raising concern among stakeholders.

Akpan Edem, an engineer who claimed to be into aquatic business in Lokoja, said the delay in full commencement of economic activities in the waterways after the said dredging, appeared to give credence to the assertion of Comrade Aminu Umar, the president of the Nigerian Indigenous Ship Owners Association (NISA) in 2016 that all seemed not to be well with the dredging project.

Umar was quoted as saying, “We keep hearing that River Niger has been dredged, down to Warri, but how has that improved the traffic of vessels along that route? The NISA does not believe that dredging has taken place,”

Benjamin Okolo, who represented Dekina/Bassa federal constituency on the platform of the All Progressives Congress (APC), also reportedly raised a motion to that effect before the House of Representatives. He said that despite the contract for the dredging of 118 kilometers from Onitsha to Idah, which was awarded to Messrs Van Oord Nigeria Limited at the cost of N10.4bn, and  another 108km from Idah to Jamata, awarded to the same company at the cost of N13.8bn, nothing  appeared to have changed on that axis.

It was not clear whether the committee said to have been set up by the then House of Representatives submitted its findings before their tenure ended.

“It beats my imagination that after all these years of acclaimed dredging of River Niger, nothing serious seems to be happening there. They should tell us whether the dredging has become a white elephant project or not,” he said, adding that the entire project has been shrouded in mystery.

But the general manager, Cooperate Affairs of the  NIWA,  Jibril Dardau, said the organisation had fulfilled its  mandate of  capital dredging of the river between 2009 and 2011, adding that two years after, maintenance dredging was carried out, using in-house experts and materials to reduce cost.

He said that in the course of the project, the water channel from Warri to Baro was made navigable for lawful activities, stressing that the river was made ready for investors to explore.

“Capital and maintenance dredging have been completed, River ports concession is being observed and management is already wooing investors,” he said.

Dardau, who said the sum of N36bn was expended on capital dredging, noted that it only required constant maintenance of two years interval to keep the river from accumulating silts deposit, which could call for another capital dredging.

Also, at a recent meeting  of the  reconstituted Board members of the organisation in Lokoja, Senator Binta Garba said dredging was a money consuming venture, and as such, the agency is not depending on government alone but  reaching out to the international community and others  for partnership.

Also, the managing director and chief executive officer of the NIWA, Chief Kingsley Moghalu, raised concern over what he called the inadequate funding of the organisation, saying it was one of the factors behind its slow pace of activities. He added that the management of the organisation was looking forward to improving their services.

Stakeholders in the maritime industry, such as the Shippers Council of Nigeria, Shippers Association, Manufacturing Association of Nigeria, including the Nigeria Association of Small Scale Industrialists (NASSI), and many others, corroborated Moghalu’s claim of inadequate funding for the NIWA and agreed that it was slowing down the pace of work.

The stakeholders, led by Okolue A. Ify, director of the North Central zone of the Nigeria Shippers Council, promised to build a working relationship with the NIWA to complete ongoing projects for full economic activities to kick off.

Experts said if the river was fully dredged and navigable, the federal government could earn the sum of N23bn for a 30-year duration of concession.

On the need to attract investors through Nigeria’s waterways, the director-general of the Shippers Council of Nigeria, Edwin Ignatius, noted that river  dredging goes beyond excavating sand to create channel  for  badges and cargoes, the state or nature of water and ports determines the decision of  investors.

He said the dredged river should be upgraded to meet certain specifications in order to build confidence in investors and the international community for patronage.

Ignatius said the Nigerian Navy was the only regulatory authority internationally recognised  to carry out a survey of the river for a possible upgrade.

He said the survey was necessary to determine the volume of silt and other deposits in the river and recommend what to be done before any serious business could be embarked upon on the waterway.

The maritime expert added that no investor would risk his money, goods or cargo on the river without assurance of security from the Nigerian Navy.

“Operatives of the Nigerian Navy are to carry out the survey in three stages. The first stage has been done from Baro to Burutu and the second is ongoing.

“The report from each survey would be deliberated upon by stakeholders and recommendations would be  given out and seen to be implemented to that effect,“ he said.

He also said a stakeholders’ meeting to deliberate on the result of the first survey and other relevant issues, which is expected to be chaired by the organisation’s executive secretary, Emmanuel Jime, a lawyer, has been slated for September in Abuja.

Meanwhile, the governor of Kogi State, Yahaya Bello, has said all hands must be on deck to ensure that necessary steps are taken to make River Niger navigable, adding that if fully in operation, the project would provide over two million jobs.