For many of us who had some sympathy for the young persons’ protest to end police brutality, what is now unravelling as their motives and… 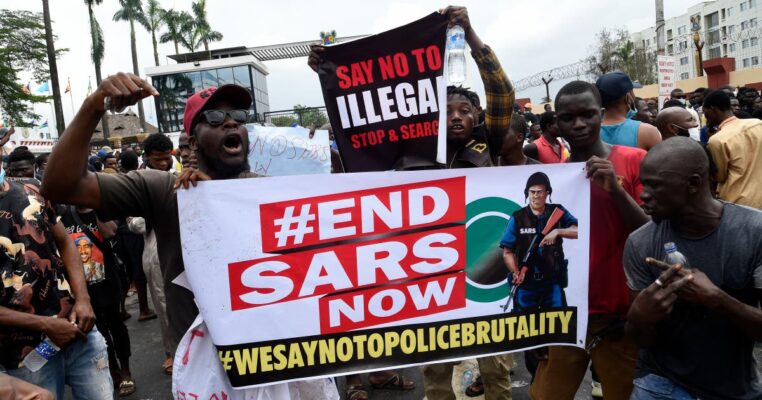 For many of us who had some sympathy for the young persons’ protest to end police brutality, what is now unravelling as their motives and modus operandi is simply bewildering. The protest that looked peaceful initially, like a carnival and a street show of sorts, went up to the next level a few days later transforming into chaotic street fights and riots and then ended up as plain mayhem. From the suburbs of Abuja to Lagos, Benin, Jos, Kaduna and many more towns, it was anarchy all the way. Hoodlums just run amok opening up gates of prisons, and targeted public buildings to burn, pilfer and destroy. There was looting on the grandest scale, not only in government palliative stores but also on private properties in markets and shopping malls.

The hoodlums installed themselves as warlords controlling swathes of some cities and in the outlying areas even setting up road blocks to extort travellers. In fact, one or two days into the rioting phase our security men scurried off the streets. But who would blame them as they were avoiding becoming targets for the mob to descend upon them. It was frightening seeing the streets without security men. It looked like we have finally arrived at the Hobbesian state of nature, whereby, as my colleagues in the political science arena would say, there was a total absence of government and we were retreating to those days when only the strong mattered and survived. By the time the dust had settled and the mayhem had abated, it was clear that some cities like Lagos would take years and billions of naira to recuperate.

However, from the testimonies at the various judicial inquiries set up by the state governments, it looks like citizens just lost their heads to commit heinous crimes. One army officers, who was at Lekki when the riots were unfolding, told the Lagos State Judicial Commission of Inquiry that he witnessed mothers calling out their children to come and help out loot at the SPAR outlet. Can you imagine? And many of us gullible citizens, plus even world statesmen, seemed to have been hoodwinked and led by the nose courtesy of the overwhelming influence of the pernicious fake news portals. We are now learning that even the massacre at Lekki, that purportedly led to the Lagos mayhem, was fake news. To date, not a single dead body had surfaced! To worsen matters, the heavy bank accounts of the organisers, now clamped down by the government, is yielding disturbing evidence of sources of monies from funders who would have less altruistic reasons for the protest.

We needn’t have to destroy to rebuild. That’s how many of us had reasoned. A compatriot, Dr Ibrahim Gashash, whose contribution to the EndSARS protest recently went viral in our WhatsApp group believe so. He had worked as a Vet in Nigeria for many years and is now with the Foods and Agriculture Organisation (FAO), a United Nations outfit. Let me conclude with his contribution:

Dr IBRAHIM GASHASH: “Myself chatting with a friend and professional colleague today. I mentioned that in the last 10 years, I have been to over 40 countries in Africa, and I can confidently say that there is no country that is as richly blessed as Nigeria, not even South Africa or Egypt. But our people just take everything for granted ……. unfortunately, including even some of the well- educated, well-travelled professionals. Here are a few examples:

– Road networks – the kilometres of paved, asphalt roads in some states of Nigeria is more than that of many countries put together;

– Abuja – there are few countries in the whole world that can even dare to dream of constructing such a brand new city out of a dense forest in under 30yrs;

– Universities – the sheer number of the Universities, range of courses, student intake and output is simply out of this World;

– Health- the sheer number of public and private medical facilities across the country and the number of patients being attended to on daily basis;

– Internet coverage – the number of connected users in some LGAs is more than that of many countries;

– Population – one-quarter of the total number of blacks in the whole World live in Nigeria and are catered for in one way or the other;

– Not to forget my profession, I am right now living in a country that has no single Veterinary Doctor, while Nigeria has over 10,000 qualified Vets working day and night to keep our animals healthy and protect us against zoonotic diseases.

Yes. There are very serious challenges and many are “suffering” intensely, there is extreme poverty in many places but the actual magnitude compared to other countries is something else. Indeed, no matter how richly blessed or advanced a place may be, the people have the legitimate right to want more and to aspire for a higher standard of living. But they also have the duty to do it not in a destructive manner and not at the risk of losing what we already have.

My biggest fear is what happens if God should decide to take away His immense blessings on us because of our ingratitude!!!”