Manchester United are hoping to save £560k a week when Ronaldo almost certainly leaves in January. That money will be spent on attempting to bring… 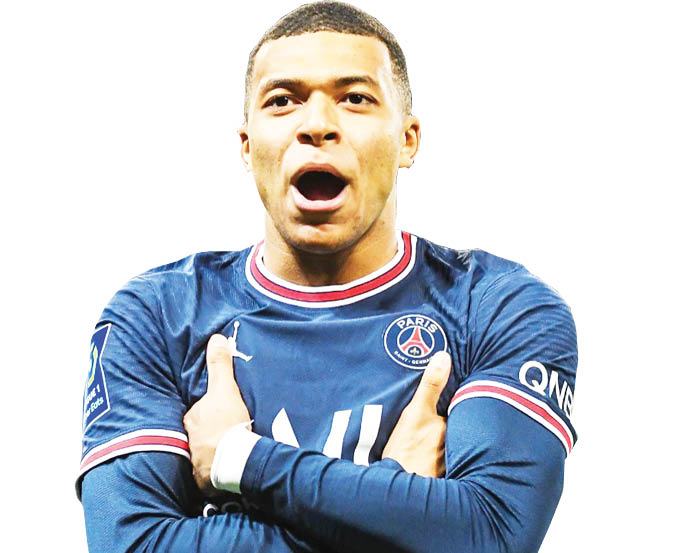 Manchester United are hoping to save £560k a week when Ronaldo almost certainly leaves in January. That money will be spent on attempting to bring Paris Saint Germain’s French superstar Kylian Mbappe to Old Trafford. He is the shock target for United and the managerial and financial staff are already preparing a huge bid to get the striker to come to Manchester. United were already looking to replace Ronaldo next summer when his contract expires but United’s directors have brought forward their plans and aim to prioritise qualification to the Champions League next season with Mbappe’s help. Napoli’s Nigerian striker Victor Osimhen is also being watched carefully by United and the Italian Serie A club expect several clubs to make offers for the £60million star striker.

Potter in firing line at Chelsea

Only two months into the job and already the knives are being sharpened at Chelsea’s Stamford Bridge and coach Graham Potter faces an ordeal to survive. Many supporters have never accepted that he is good enough to be Chelsea’s No1 coach and the club’s rapid descent down the table, after a winless five Premier League matches, has given them plenty of ammunition with which to attack Potter. His previous club Brighton, Liverpool and Manchester United sit above Chelsea in the table and many fans have also criticised the new owner Todd Boehly for sacking Thomas Tuchel and bringing in a relatively inexperienced top-level coach. As many Chelsea players are busy packing their suitcases and heading off to Qatar for the World Cup Potter is left behind to assess, analyse and work out what is has gone wrong. On Monday he gathered his players and with a low-key meeting went through the recent embarrassing 1-0 defeat to Newcastle. Potter does have his supporters who blame Todd Boehly for the situation and one tweet this week reflected the thoughts of many: “Potter is actually the victim. Boehly dragged him into the most hostile situation ever with the worst squad we’ve seen in years, all in the middle of an injury crisis.” In a meeting with Boehly this week, Potter emphasised that money has to be made available to strengthen the squad. If Boehly agrees to bringing in new players in January it will underline his support for Potter and if he does not it means he is working on the list of possible replacements for the coach which includes Mauricio Pochettino who is still out of work after leaving Paris Saint Germain. Potter defended himself this week and he answered some of our questions by saying, “It’s not nice not to get results. It’s as simple as that but I have to look at the situation we’ve had to deal with. It hasn’t been straightforward at all. We’ve had a lot of games and injuries to key players destabilised us and against Newcastle you could see they are still missing. We’ve just had a period that’s been incredibly challenging.”

Ronaldo’s TV interview was a plan to leave United

Cristiano Ronaldo has made a big mistake being interviewed by my old colleague Piers Morgan in which he claims he has no respect for Manchester United coach Erik Ten Hag. But there is more to the story than that and both Ronaldo and his agent Jorge Mendes had talks with Bayern Munich last week and the accusations he has made will force United to open the door for him to leave. The problem for Cristiano is that, at 37 years-of-age, he cannot perform like he did ten years ago. His frustration with starting only four games since returning to Old Trafford is not justified because as Ten Hag points out, his stats are very unimpressive. He has scored only three goals in all competitions and has started mainly in the second-rate Europa League which he said he did not want to play in. Leaving a match early, throwing a tantrum at not being selected to play and now speaking out against the coach, the club and directors has forced Erik Ten Hag to say that Ronaldo will never again play for United. I have been told several times that Cristiano can be released in January providing there is a club willing to pay him top dollar because even at the age of 36 Ronaldo does not come cheap. Insiders at the club tell me many people at Old Trafford think he is right to criticise the Glazer Brothers, owners of United, and the training facility at Carrington needs upgrading for an international club of United’s standing. However, he is wrong to criticise the coach and Ten Hag is only doing his job as he sees it. No player is ever bigger than the club. Ten Hag is the future, Ronaldo for all his brilliance and amazing career is the past. He has made a big mistake leaving Old Trafford, slamming doors shut, ruining his reputation and losing many friends at this famous club.

*I am told that Chelsea owner Todd Boehly was thinking of taking Ronaldo but coach Graham Potter advised against it. I am also told that Arsenal considered him but Mikel Arteta is building a youthful team as is Eddie Howe at Newcastle. In all cases the only benefit for the clubs are sales of Ronaldo shirts and kit wearing their colours. However, in football money is a strange motivator. It is doubtful that Ronaldo, at his current level, would actually get into those teams on a regular basis. Ronaldo’s World Cup performance could enable him to continue playing at the top level or finish one of the most accomplished careers of all time.

Mikel Arteta plans to keep his players fresh during the World Cup but playing in the Dubai Super Cup next month. Arsenal play French club Lyon on December 8th and face AC Milan five days later. Liverpool are also competing in the competition but will not play the Gunners. In order to have his players fit and ready to continue their quest to win the Premier League title they are also planning to play a Spanish side at the Emirates Stadium on December 17th.

Bielsa in talks with Bournemouth and on Everton’s radar

Many Leeds fans still hold great respect for coach Marcelo Bielsa despite him being sacked in February with the club in a relegation battle last season. I have learned that his next stop could be Bournemouth if the directors decide not to appoint permanently the current interim manager Gary O’Neil. It all rests on whether prospective owner Bill Foley, an American businessman, takes over the club because he is the one who wants Bielsa.

When he arrived at Newcastle coach Eddie Howe’s priority was to strengthen the Baggie’s defence and he brought in Kieran Trippier, Sven Botman and top goalkeeper Nick Pope. His next plan included improving underperforming players such as Miguel Almiron and Joelinton and again he succeeded as they have both been excellent just recently. Highly rated midfielder Bruno Guimaraes joined this year which demonstrates how respected Newcastle now rate with players looking to change clubs. Speaking with my Newcastle sources this week, it was revealed that the club do not realistically see themselves challenging for the title this season but are clearly the third best team in the Premier League behind Arsenal and Manchester City.

Moyes hangs on as manager

I understand from behind closed doors at West Ham that the owners have held a meeting and decided not to use the World Cup break to make a change of manager. Insiders tell me that Moyes has “plenty of credit in the bank” because of his performance last season and the Hammers good European form this year where they have won all eight matches in the Europa Conference League. Moyes also has the support of sporting director Mark Noble and captain Declan Rice who is now away on international duty however West Ham are only just above the Premier League relegation zone in 16th place and have won only four of their last 15 matches.