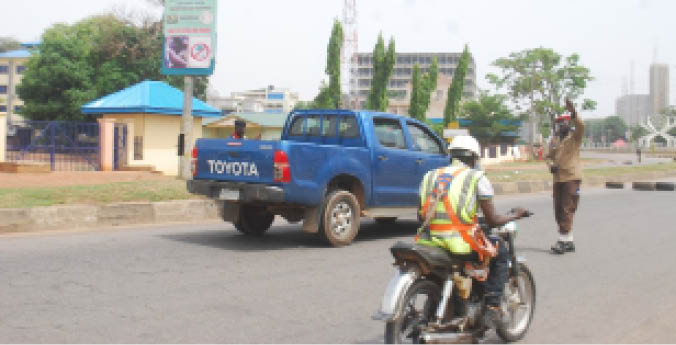 FILE: Security agents at a roadblock in Kaduna

The Joint Mobile Sanitation Agency of Nigeria (JOMSAN) of the Association of Local Government of Nigeria (ALGON) and the National Union of Local Government Employees (NULGE) has called for an immediate end to the illegal roadblocks and collection of multiple ‘illegal’ levies from motorists across the 774 local governments of the country and the FCT.

The National Chairman of JOMSAN, Dr. Nnamdi Ogbogbo, made the call in Abuja at the unions’ launching of the 2021 Vehicle Permits and workshop titled “Building Partnership for Food Security in Nigeria”.

According to him, there are many illegal blockages of the highways by persons claiming to be collecting taxes and other revenues on behalf of local governments.

This, he said, largely contributes to the high cost of food and other basic good thereby heightening food insecurity in the country.

“It is in the light of this that the JOMSAN, approved by the Federal Government, is calling on the federal, state, local government, and all security agencies, to join us in this war against multiple taxation and the blocking of federal highways in order to bring back sanity to our roads, enhance food supply chain and ensure the ease of doing business in our country.

“The practice of stopping vehicles on the road in order to sell unapproved and fake clearance certificates will henceforth be a thing of the past. The use of unauthorized associations to certify local government permits must also come to an end,” Ogbogbo said.

He also said that his administration will introduce the use of Marshalls which will soon be recruited among the youths and would be trained to check the menace.

Also, the immediate past President of JOMSAN, Ambassador Dukeson Godwin, said that the present administration was serious about dealing with recalcitrant members, who he said would be expelled for fighting or engaged in other illegal activities that threatened food security and other livelihoods in the country.

He said, “We are calling on the federal and state governments to assist us in this battle with the necessary logistics and funding if we are to effectively carry out the directive of the National Assembly and ALGON/NULGE to eradicate multiple taxations and stop all illegal roadblocks and bring uniformity among all 774 local government revenue contractors in the Mobile Advert Industry.”