The UEFA Champions League quarter-final matches are underway with a potential cracker between Atalanta and Ligue 1 champions PSG on Wednesday. With all the eight… 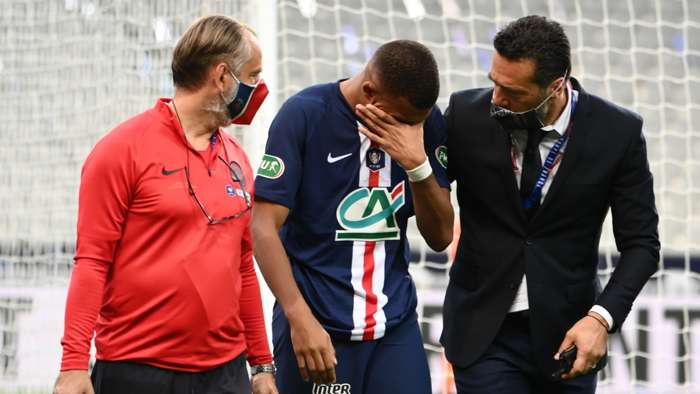 Kylian Mbappe limping off the pitch after picking an ankle injury during the French Cup finals against Lyon. Photo Credit: Getty Images

The UEFA Champions League quarter-final matches are underway with a potential cracker between Atalanta and Ligue 1 champions PSG on Wednesday.

With all the eight contenders in Lisbon, teams have started gauging their chances, hoping their key players will provide those ‘moments of magic’ in this stage to help them through.

The PSG starlet, Kylian Mbappe, who picked up an ankle injury during their French Cup final against Lyon on July 24, is a doubt to feature against the Serie A side on Wednesday.

The Frenchman was to miss up to three weeks of action before he was named in their Champions League squad on Saturday to give the Ligue 1 champions a boost.

This is apart from the fact that Mbappe was spotted training with his teammates in the build-up to the showdown, an indication that he could play part in the match.

In a pre-match conference, the PSG coach, Thomas Tuchel said: “If he trains well today and nothing extraordinary happens to him, he will be in the team tomorrow.

“The pressure is mounting a bit, we are lacking in rhythm, we have only had two matches, but they were two finals, two decisive matches, the same thing, and my team is great in the decisive moments, in decisive matches, like in a final, with penalties, that gave us a lot, a lot of confidence.

On his part, Atalanta’s coach, Gian Piero Gasperini, said his side is determined to challenge Tuchel’s, stressing that the team will not only be playing for themselves but the region.

“We know the level of expectation that there is around this match, and how much passion there is for Atalanta in Bergamo and the surrounding province,” explained Gasperini.

“There is extra motivation for us after what has happened.

“We have to represent our city in the best possible way and give the people something to smile about.”

“We have shown that without being a big club or having massive investment, it is possible to do well in the Champions League with passion, good football, and desire.”

The Mbappe’s possible absence for PSG would be a huge blow for the Ligue 1 champions as the starlet has scored 30 goals and provided 18 assists in a total of 34 appearances for PSG this season.

Even though Tuchel’s side are obvious to scale the quarter-final stage against Atalanta as they are set to feature the likes of Neymar, Marquinhos, Angel Di Maria, Thiago Silva, Mauro Icardi, Thilo Kehrer, and Presnel Kimpembe, but the Italian side have proved to be a plucky team.

However, the Ligue 1 champions have failed to reach the UCL semi-finals since the 1994/1995 season.