In May 2020, Governor Nasir El-Rufai of Kaduna State prohibited the almajiri system of education and warned that parents who enrolled their children into the… 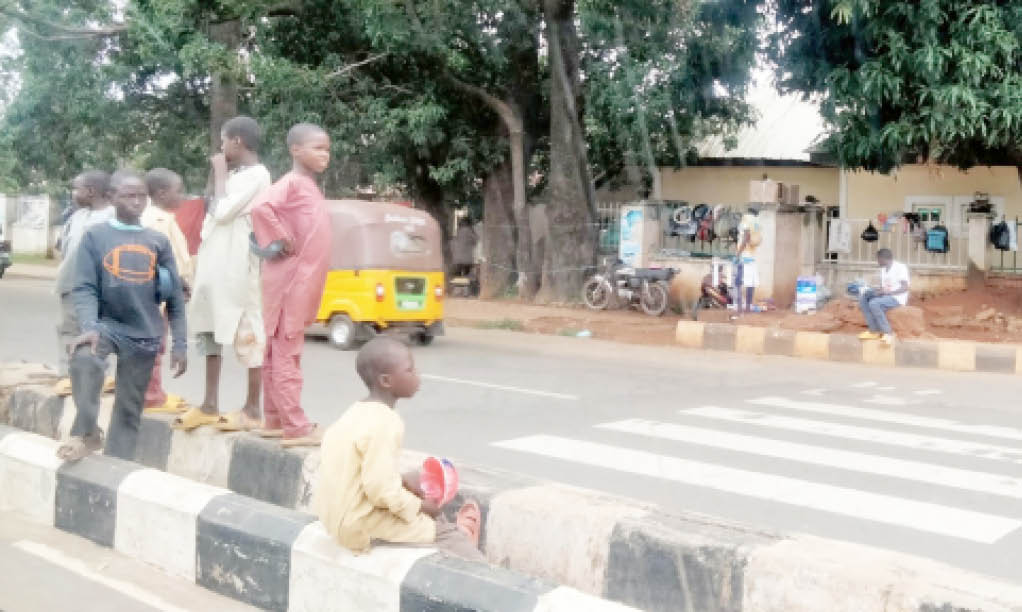 Some Almajiri along Independence Way in Kaduna PHOTOS: Maryam Ahmadu-Suka

In May 2020, Governor Nasir El-Rufai of Kaduna State prohibited the almajiri system of education and warned that parents who enrolled their children into the school stood the risk of prosecution of up to two years in prison.

It is two years since the Kaduna State Government lifted many almajirai out of the state to create a better environment and opportunity for the children to be trained outside the streets but this dream has not materialised as they have returned to the streets of the state.

Daily Trust on Sunday reports that despite the confusion relocating the almajirai generated among state governors, many children are seen in their numbers in Kaduna in tattered clothes begging with bowls.

It was, however, gathered that most of the almajirai seen roaming the streets are indeed from Kaduna, and they live with their parents. The children now serve as their families’ breadwinners.

They throng different markets, motor parks, petrol stations, food vendors’ joints and prominent junctions in the state capital, particularly where there are traffic lights, where they spend the day begging for alms.

They are also seen on major roads and streets, a situation that has exposed them to various dangers.

Daily Trust on Sunday gathered that the state government is working with the United Nations International Children’s Emergency Fund (UNICEF) to generate data on almajirai in the state.

The Commissioner for Human Service and Social Development in the state, Hajiya Hafsat Baba, said plans were underway, in collaboration with the UNICEF, to enroll the children in school and provide a monthly stipend of N5,000 to each child every month.

Our correspondent further gathered that in a bid to reform the almajiri system of education, the Sir Ahmadu Bello Memorial Foundation (SABMF) provided learning materials to 101 almajirai in Chikun and Kaduna North local government areas.

It was gathered that the gesture was aimed at improving teaching and learning in Tsangaya schools, where the children will receive both Qur’anic and western education.

The director-general of the SABMF, Gambo Umar, an engineer, said the foundation would ensure that the gesture is replicated in all the 19 northern states in order to ascertain a better future for the next generation.

He appealed to the government and other stakeholders to provide an enabling environment for the Tsangaya system of education in order to reduce the number of out-of-school children roaming the streets.

“Who said an almajiri cannot become a professor, doctor or even president? All they need is a little support and an enabling environment, if not, they will become a burden to the society,” he said.

Some of the almajirai who spoke with our correspondent said they did not want to be enrolled in school; hence they prefer begging because their teacher (malam) told them that western education was bad.

The boys, who are about 8 years old and simply identified themselves as Muhammad, Abdulrazakar, Naziru and Ahmad, said they came all the way from Rigasa in Igabi Local Government Area, about seven kilometers to the city centre.

While Muhammad said he preferred to beg and earn N400 per day to going to school, Naziru said they were sent by their parents from Kano State to learn Qur’anic education.

“We came to Kaduna from Kano State a year ago, and we will not go back to our parents until after four years. Our parents sent us here to learn Qur’anic education, but since our malam is not able to feed us, we have to come out to beg for alms.

“We do not want to learn western education because our malam told us that it is bad. When we beg we get about N400 each, which we use to take care of our primary needs. We also give the malam a little out of it,” he said.

Hajiya Hafsat further said, “We have not been repatriating them, but we are also taking into consideration the problem of insecurity. As you know, Kaduna is being supported by the UNICEF to have a data on the almajirai. We captured over 10,000 that are from Kaduna State.”

She noted that while the data collation exercise was still ongoing, findings by the government revealed that out of the 10,000 children that were captured, only 2,673 were still with their parents.

“We want to enroll the children in school and ensure that they have all the benefits like any other child in Kaduna State. Based on the report we wrote to the governor, he directed the State Universal Basic Education Board (SUBEB) to enroll them in school, while the National Identity Management Commission should ensure that they have identification numbers,” she added.

She noted that the state government also decided to give each child a stipend of N5,000 every month, saying, “Because they are minors, an account will have to be opened for them using their parents’ names. The signing of the memorandum of understanding between the bank and the UNICEF has been concluded.”

She assured that by the next academic session, the children would be enrolled in various schools across the state. “We will provide them with uniforms, books and schoolbags,” she said.

She was of the view that by the time the first set of the children are enrolled and the news goes round, the remaining 8,000 that were taken out of the state would be captured.

She added, “Our major challenge is that we have two categories of almajirai: those sent from other states by their parents and those whose parents are in Kaduna but they are the breadwinners of their various families, which is highly disturbing.”

On the sanctions imposed by the state government on parents of the almajirai and their Qur’anic teachers, she said, “I have already said that the sanctions would be fully implemented by the time the enrolment process begins. So, I want to encourage these Qur’anic schools to put up a structure where the children are not sent out to beg; rather, their parents should be made to provide food items for the upkeep of their wards.”

She frowned at the wrong orientation some Qur’anic teachers give the children to corrupt their minds, saying, “The orientation is not right because once you are teaching a child that going to school is bad, they will grow up to become a menace to the society. But when they have the right teaching, they can become responsible members of the society.”

She disclosed that the state government had identified 10 almajiri schools in Mararaban Gwanda, Kudan and Kubau and Jos, which it intends to renovate, upgrade and equip through a partnership with a philanthropist, Alhaji Musa Bello, in order to teach the children both Qur’anic and western education.

“In partnership with Alhaji Musa, we will enroll these children and train the malams that will teach them through a curriculum being developed by the National Board for Arabic and Islamic Studies (NBAIS) and the Ministry of Education,” she revealed.

She called on governors of other northern states to find ways of addressing the issue of Almajirchi, saying, “I do not think other states have relaxed, but you know we have to also look at the challenge of insecurity. While the government is putting efforts to tackle insecurity, we are also ensuring that we do not leave our children in the streets.”

Stakeholders believe that although there are deliberate moves by the Kaduna State Government to address the issue of Almajirchi, there is the need for various organisations and individuals to help in resolving the menace.