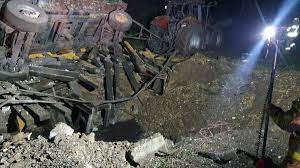 Poland said a Russian-made missile was likely to blame for the deaths of two Polish citizens in an explosion near Poland’s border with Ukraine on Tuesday, a blast that raised anxiety on a day of broad Russian missile attacks on Ukraine.

Poland held an emergency meeting of the country’s national security and defence council and President Andrzej Duda said it was “highly likely” that he would call for invoking Article 4 of the North Atlantic Treaty Organization’s charter, under which members confer when a nation’s territorial integrity or security has been threatened.

While the Polish Foreign Ministry said the missile was Russian-made, Mr Duda told reporters, “It was most likely a Russian-made missile, but this is all still under investigation at the moment.”

He added, “We do not have any conclusive evidence at the moment as to who launched this missile.”

Both the Russian and Ukrainian militaries could be using Soviet-era Russian-made missiles, military analysts noted.

Zbigniew Rau, Poland’s foreign minister, summoned Russia’s ambassador to demand “immediate detailed explanations” for the blast, according to a statement from the ministry.

President Biden joined an emergency meeting of leaders of the wealthy Group of 7 nations on the sidelines of the Group of 20 nations summit in Bali, Indonesia, on Wednesday morning, to discuss the situation in Poland.

Asked by reporters after the meeting whether the missile had been fired from Russia, he suggested it was not.

“There is preliminary information that contests that,” he said. “I don’t want to say that until we completely investigate.” But he added that “the trajectory” of the missile made it unlikely “that it was fired from Russia.”

The Kremlin has denied involvement in the explosion, and there is no immediate evidence of an intentional strike. A deliberate attack would have broader and much more serious consequences because Poland — unlike Ukraine — is a NATO member.

The alliance’s charter commits its members to mutual defence, stating that an attack on one is an attack on all. That could be taken as requiring a concerted response to the blast in Poland.

Russia’s Defense Ministry denied any involvement. On Telegram, the ministry wrote that any statements by Polish officials or media outlets about Russian missiles hitting the village were a “deliberate provocation.”

“No strikes on targets near the Ukrainian-Polish state border were made,” the ministry said.

A Polish government spokesman, Piotr Mueller, said special procedures had been put in place, including increasing the combat readiness of certain military units.

Russia launched a widespread missile attack on Ukraine on Tuesday, with roughly 90 missiles aimed primarily at the country’s electrical infrastructure.

Ukraine’s Volyn region, where Russian rocket strikes were reported on Tuesday, lies across the border from Przewodow.

The explosion’s proximity to the border raised the possibility that it was the result of an errant missile or the remains of one that had been shot down by Ukraine’s air defence systems.

The Ukrainian air force said 70 incoming Russian missiles had been shot down on Tuesday. A fragment of one destroyed missile struck a residential building in Kyiv, killing one person.

Ukraine’s foreign minister, Dmytro Kuleba, said in a Twitter post that the explosion in Poland was not caused by a Ukrainian air-defence missile.