Trump said he would not be attending Biden's inauguration on January 20. 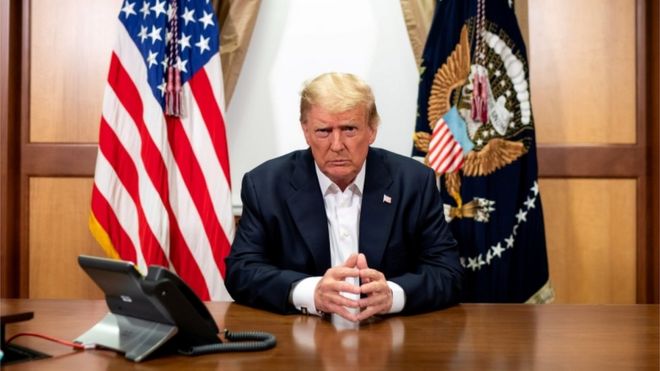 Trump in a phone call at Walter Reed Medical Centre

Twitter said Friday it has permanently suspended President Donald Trump’s account, citing the risk of further violence following the assault on the US Capitol by his supporters.

“After close review of recent Tweets from the @realDonaldTrump account,” Twitter said in a blog post explaining its decision, “we have permanently suspended the account due to the risk of further incitement of violence.”

Twitter — Trump’s favorite megaphone — blocked him for 12 hours after the deadly attack on the US Capitol on Wednesday and threatened permanent suspension if he continued breaking its rules.

Trump returned to Twitter late Thursday, posting a video message that seemed aimed at calming tensions after the mayhem caused by his supporters.

He acknowledged his presidency was ending and promised a smooth transition to Joe Biden, although he did not go so far as to congratulate or even say the name of his successor.

Twitter said at the time it was continuing to watch Trump’s social media activity to determine whether further action was needed.

The decision to suspend Trump’s account came after a pair of tweets on Friday, according to the one-to-many messaging platform.

In one of the tweets, Trump vowed that none of his supporters would be “disrespected,” and in another, he said he would not be attending Biden’s inauguration on January 20, as is customary.

“These two Tweets must be read in the context of broader events in the country and the ways in which the President’s statements can be mobilized by different audiences, including to incite violence, as well as in the context of the pattern of behavior from this account in recent weeks,” Twitter said.

The company determined the tweets violated its “Glorification of Violence Policy,” and that “user @realDonaldTrump should be immediately permanently suspended from the service.”

– Talk of new attack –
Twitter said it also factored in that plans for more armed protests have been proliferating on and off the service, including a proposed second attack on the US Capitol and state capitol buildings on January 17.

Trump’s tweeted statement about not attending the Inauguration has been received by some supporters as his continued rejection of the election’s legitimacy and a sign that the event would be a “safe target” since he won’t be there, according to Twitter.

Wording in Trump’s Friday tweets was seen by some supporters as praise for those involved in what has been described as a coup attempt, and indication he does not plan to smoothly yield power to Biden, Twitter said in the post.

Twitter confirmed that several hundred employees signed a letter to chief executive Jack Dorsey saying they were disturbed by the “insurrection” carried out by Trump supporters, who had been rallied by the president.

The employees called for Twitter to assess the role its platform played in Wednesday’s events.

“Twitter encourages an open dialogue between our leadership and employees, and we welcome our employees to express their thoughts and concerns in whichever manner feels right to them,” a company spokesperson said of the letter.(AFP)